Clary, a pod widow; or, Cat life in our house

Ian, Her best friend, brother, companion, ginger tabby with yellow eyes, rounder zebra-like tail -- with the same face -- wants nothing as much as to curl up deep in a soft pod with high sides I placed in the back of Yvette's room, under a table. He feels safe there. He will walk up and down the hall, and stand i front of her room, and look up at whoever is passing, and meaningfully declare himself, 'mew mew." He knows that we know he is saying he wants to go into that pod. Yvette is at work during the days (5 days a week) and I cannot let him in there since he is a cat, not a human adult. And he will get out of that pod every once in a while and open her drawers (he's very good at opening the lower ones) and get in, all the way in the back. Just as safe. But he gets hair all over her stuff and sometimes he cannot get out again. And we hear loud "miaows" after a while and banging. We -- or Yvette when home -- have to go over there and pull him out.

How he got to be such a scared-y cat I don't know. He flees at the sight of most strangers. Hides under beds. This behavior is part of his pattern of keeping out of sight. Sometimes he sits by the doors in the back of the house and watches us in the front. On the alert. Wary.

Now Clary does not mind Yvette's room at all. She loves to luxuriate by the window which faces west. She sits between the back of Yvette's computer and said window on Yvette's desk. Or she curls up in Yvette's baby blanket which Yvette still has and is one of two such older blankets on her bed. But after a while she wants to run about, play, look out windows and be active -- especially with Ian near her.

What Clary does not like is when he is in his pod and Yvette has closed her door and she cannot get in. She does not like him to be in that room without her. But she does not want to be there either. So she goes back and forth mewing sometimes too, at a loss.

She is not at all a scared-y cat, though sometimes is influenced by him to flee. Cat see, cat does. Generally her instinct is to come forward, make friends, sniff the new person. She does not like sudden loud noises and like him hides under the beds when the mowers come and make a racket outside. How she got to be as tenacious, openly affectionate and bold I don't know either. She does let him lick her all over in the night, sleep in her paws in the Admiral's chair after he has gone to bed.

Not that sometimes he does not want to play and rough and then she flees him, goes under stools, growls if necessary. "Go away. Enough already." She likes the way the Admiral plays with her, gently teasing. Ian curls up against the Admiral's neck and makes a sort of love by rubbing.

They both seem to understand the phrase "wet food" or "food." Or they know the routine and when it's time. One morning I got up and went to the kitchen as usual and was putting our their dry food. They jump up from the bed with me in mornings and follow me. Well I began to talk to Yvette and stopped what I was doing. "Miaow!" said Clary loudly, slightly indignant, impatient. In her eyes I saw she was waiting for her food, and what could I be doing? 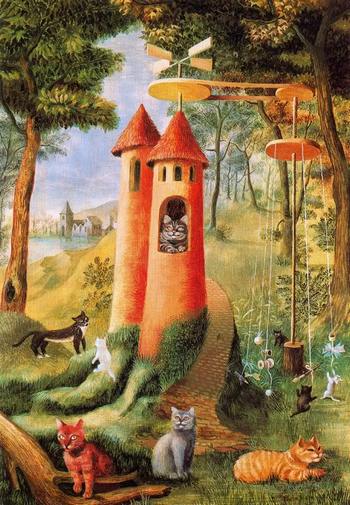 Unlike the above happy cats, neither of our cats ever goes out nor do they manifest any desire to go out of said house. They sniff about but are frightened. When a kitten, Ian (before he became this scared-y cat) once jumped into our screened porch. I was so unnerved by it, that I fell in reaching him to bring him back in. That unnerved him. Clary will grab a leaf in her teeth and trot off with it before the Admiral can take it away.

Cat life in our house,
Sylvia