The psychiatry hjacked by the drug business: complicated grief? 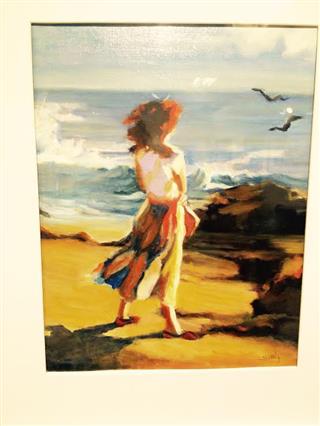 Sara Sittig, By the Sea

The drug industry has done terrible harm in the US -- leading to heroin addiction among other things. A new acquaintance of mine has shown me that pill and drug-dispensing for mental and social trouble is not ubiquitous in France. Here in the US the great solution is to hand out powerful medications which eventually can hurt people badly by many more things than mere addiction (I'm being ironic).

I read a good article about a book on military psychiatry in Times Literary Supplement the other week: it seems that as the diagnosis of PTSD was invented and spread and cost a lot of money someone came up with the absurd idea that the way to get rid of a trauma was to relive it. This idea has spread throughout the psychiatric industry: I came across it in Kaiser several times. You can't swim, well have a parent throw you in. At last this is being repudiated in the military as the damage is seen. Not at Kaiser though.

A friend sent me this article in the New York Times whose value is that it acknowledges some people's grief goes on for a very long time. I don't see it acknowledged except among those who have been bereaved. Even those who don't grieve for long will notice those who have been similarly hurt and observe this reality. But few others or if they do they never write of it. I shall connect it to the failure of the psychiatry industry -- by the way the fully certificated "doctor" makes 6 figure sums a year, beginning with the number 3.

On its specific content: I agree with the person who declaimed against pathologizing common human emotions. Normal/abnormal are judging words. One of the two people who ran the group therapy I was in the spring before this past (so one year and 4 months ago) said there was a bell curve. In the center a large proportion of people take different lengths of time to do whatever is meant by recover/feel better &c; on one side is a percentage who "get over it" quickly (within a year say) and on the other a percentage who don't.

I note the story does not tell us what are the techniques of helping "complicated grief" except instead of 6 weeks of group sessions there are 16. Also that at the end we are assured the woman is fine now -- "gotten over it." The extreme of a woman never going out or picking up a phone loads the argument too is a loaded example, false the way depression is usually described as a catatonic state. I go out all the time, talk to and engage with (sometimes to my detriment as this past week on WWTTA) people a lot.

In a way it's an absurd category. Complicated grief as if anything in human life is simple. This is complicated because it doesn't yield to quick solutions -- i.e., the model being drugs, pills.

So, to connecting the above with the self-enrichening psychiatry industry (a branch of the people now making huge sums on the cancer epidemic): I am a depressive person and last week was made angry (that's the word) when I visited the psychiatrist assigned to my case. I had been told I had to visit him now since a year had gone by since the last visit and I would not get my sleeping pills (that's not true I now know from him) unless I showed up. I should have remembered that in fact he orders them into a local pharmacy as the Kaiser Pharmacy has refused to renew them as often as I need to take one pill each night.

Why angry? Indeed embittered?  Unless you pay big sums and know someone who can recommend an analyst psychiatrist today the only thing such people do is prescribe pills and write down on your record labels naming what they think is your "disorder" and how they surmise you are doing. This time under "recurrent episodes" (his term for my grief) there was "in full remission" because I didn't tell him anything. Since I've learned how the DMV can get into your records (and many other agencies) I've decided to say nothing as the man doesn't help me at all except these pills. I no longer want to tell him or any of them at Kaiser about me as since the DMV incident I've learned that gov't agencies demand to see the whole of my files even if the law supposedly says they are not allowed to.

Here is a whole profession of people making big sums, who could be trained (I suppose) to help people and they simply refuse. All they will do is offer you body-altering chemicals. It was worse than a long waste of time -- 40 minutes there and back, 25 minutes in his office -- because it is angering/embittering when I see him. Not at him individually so much but at what I remember psychiatry once was and what it is today. Years ago for a year and one half I saw a man who talked with me about my troubles and life -- twice a month and he helped. This man is a pill dispenser and his questions prescripted. I can't even object to some of what he says lest he stop prescribing these pills. He grated on me when he had (to my mind the temerity to suggest I stop my glass(es) of wine at night and in the next breathe was offering me powerful anti-depressive pills. He's seen me at most 7 times in his life and would change me chemically (does he know if these medications are carcinogens? doubtless he'd be sure they are not), but objects to my mode of relaxation. I did say something to that, told him he was a puritan. Of course with his degree he thinks he knows so much more than I.  I sensed his condescension and laughter at me. But said nothing to this. Sessions are risky, and you must not tell the "doctor" what you think of what he has said and done, for then you might not get the pill you do need. Like when you are in hospital, don't offend people who have the power to hurt you 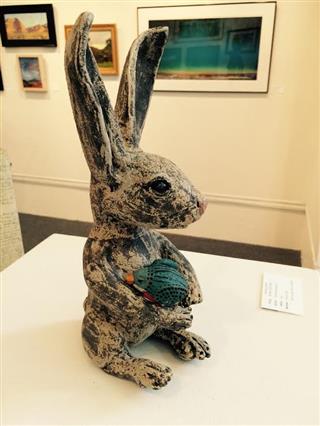 At the Haven where I went for a year and a half I found help: three people. I never learned  what were their degrees, one was I think a psychiatrist doing decent pro-bono work once a week. She was the finest help as we talked of deeper problems. A man who seemed to be there becuase his partner-wife of 12 years died some years ago of cancer and he found some compensation in running groups and helping others. An ex-English teacher in high schools in Canada. Finally, Charlie, a specialist in grief, who followed the mode of giving advice about the here and now.  I sent the place $400 altogether (2 separate checks). These 3 individuals were paid nothing; their work unsung, unacknowleged publicly. The Haven is located in an old house behind a church in Arlington, appropriately called "Hope" Lutheran.
Miss Drake
Tags: disability discourses, seasonal, widowhood, womens lives
Subscribe