How we resolved issues ...

There is a comfort in the strength of love;
'Twill make a thing endurable, which else
Would break the heart ... " -- Wordsworth

Dear friends and whoever reads this blog, 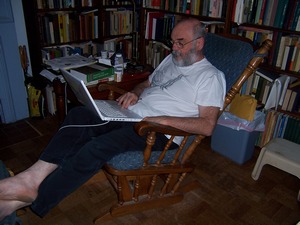 In the last year of his life, the last fall, November 2012

Since Izzy and I took a trip to Belgium, and then returned to England, Devonshire, and Cornwall last week (10 days and nights),  I've been remembering how Jim and I resolved issues, and specifically one about travel.

I've never liked traveling. A couple of months after we met, around Christmas time I took a trip to Germany and France, arduous for me, an ordeal, yet I saw much (in Germany wonderful towns and churches, Berlin, none of which I'll ever see again) and stayed in Paris so long I began to talk in French and caught myself beginning to think in the language as I read it. When I returned finally to Leeds, having lost track of the days and dates, desperate to cross the channel and come back to him, he stood at my door and asked me the usual question (which is not a question, but a demand for a yes), Did you have a good time? and I said, I went, how much strength do you think I have?

In our first years we had no money to go anywhere. We did manage England once for a week in the summer of 1977 because his father was dying of lung cancer -- to see his father and mother. We stayed with them; so it was the fare and one trip by car to Glastonbury as I recall (and Arthurian sites). Jim showed his ability to drive on the left and we paid for but one night away from his parents' home in Southampton.

But otherwise we stayed home in Manhattan; we'd divide his salary say for 3 weeks into 4 (he'd take a third unpaid week) and spend it all in New York City going out. About the later 1980s we began to have the wherewithal to go places and suddenly he wanted to go; he had this scheme that we take two children in a car and just drive out to the world. In 1974 we had done just that when there were two of us only and had a magical time. But we were easy to please. I was adamently against this scheme to produce misery. So he said I needed to think of a place, and needed to make arrangements with him. I looked at him and went back to whatever I was going.

He kept this up and then began to insist. So, not being able to take pressure from him, I locked myself in the bathroom. He saw me do it and came over and asked what was I doing? I said I was never coming out, ever -- (in the spirit of Austen's Mary Crawford using the word never) -- but would consider emerging if he would promise to leave me alone about holidays and vacations. "Leave me be" and I'll come out. He said, "Ellen, I'm not knocking down this door." I remember how patiently he said that. I said, "You don't need to. I'll just sit here. You can't fit in through the window as it's too high and narrow." Some time went by. It was not too considerable. He came back and said, "all right, I will leave you alone about arrrangements, plans, and I will make arrangements and plans, but you have to agree to go. I want to go away sometimes."  I thought about it, and said, "Okay. I'll come out and go where you want just as long as we have a place to go to. And leave me be about it."  He agreed. I opened the door and came out.

He had won, sort of. I would go, and where he wanted, but I would go if certain terms were met and I was not asked to do something I could not cope with.

That summer he rented a house from a man in his office; it was somewhere in Maryland where people go regularly for vacations. We stayed about a week; there were  beaches, boardwalks, amusement parks and all the rest of it. It didn't cost very much but we were going to very hot places places invented for tourists to buy junk, sometimes noisy, the food usually bad. The happiest moment was on Lewes beach, a quiet place, meant for local people and the one nice thing I remember is a ferry ride over to Cape May on a very rainy day. He must've been as bored mostly as I was for the next year he took us to Italy for 5 weeks, renting an apartment for us in Rome.

And so we began to travel. That first one he had made a couple of mistakes, like trying to rent a car weeks ahead; he relied on connections too strongly (as Izzy and I did this past 10 days -- our first time out together, where I and she made the arrangements together). Slowly over the years we learned how to do it, what we liked -- Landmark Trust places, eating in mostly, and by 2000 or so I had gotten to the point where I looked forward, well almost to these trips. We had good times: Bath, the Gatehouse in Devonshire, a clock tower in Lympton, all over England, to London and environs, twice to France. 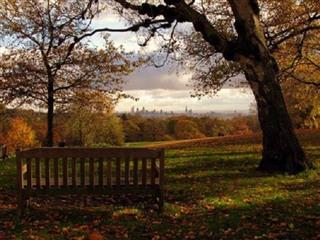 We went away with our daughters too. But a few years ago he began to tire or be reluctant to go far or too often. He worried about our lack of money to cover the next possible 20-30 years.  Ironic, now.

To return to how we resolved issues. One of us would do something that we could not get past, something that required one of us give in, make a compromise.  One of us would do something that was the equivalent of setting a date in court where when the date comes you cannot avoid it, so you do something before. We didn't discuss the issue. We never discussed what upsurges in me that makes me so intensely love the (false -- I know it's false) security and familiar surroundings and routine of home. Often the issue was something like that, some upwelling leading to a stance or a decision one of us wanted to stick to, that went deep with one of us and would have caused trauma between or to one of us had we to tried to reach its core by talk. Just like when we would know the other was doing something that might be dangerous or hurt or ill-advised, and we didn't pry into why or try to stop one another. Maybe he did try to stop me once in a while. I had a job offer for a full-time job in a community college; he thought the money lousy, the number and kind of courses awful and just threw the letter of acceptance out, tore it up. But he knew that I wouldn't mind. We knew how far we could go. And usually we let one another be. We didn't hurt one another, didn't cause emotional pain beyond what was the urgent compelling passion underlying the dispute or need. I think most of the time he sort of won. We did what he wanted, but on terms I could endure. 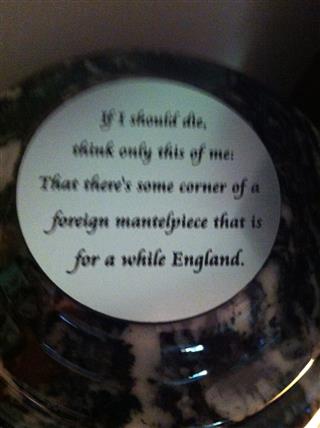 The words he composed for the top of the urn that sits on my mantelpiece.

I'm rereading the first two Poldark novels once again, and I've come across twice now where after Demelza and Ross marry, she says to him, Ross leave me be. And he does. And she most of the time does not try to control his decisions; she may react afterward directly passionately out of her inner core but it's aftermath coping with what is.