Donald Trump: who can refute a sneer?

I've been aware of how little I know about Donald Trump; unlike Romney or Obama or other candidates for president who have been campaigning for a while I have not "naturally" come across any biographies. I don't read his or other politician's sites the way I rarely read about anything on-line over-the-top controversial. Such things need not be political; they can be the sort of things said to "go viral."

Well finally (so to speak) I've come across a biography in the form of a review of a biography by Deborah Friedell which seems to me to contain significant information about him: it centers on what he denies, and by telling what he denies and matching this up against documentary records, Deborah Friedell offers a perceptive sketch of Trump's background, business history, and personality: "Tycooniest."

It seems (among other documented realities) that his father physically rioted with Ku Klux Klanners, and his Trump rental properties regularly kept black people from renting their properties. His mother was from a Scottish immigrant family (the Hebrides): she repeated Norman Vincent Peale exhortations at him. He hits out egregiously and without provocation at people through newspapers. The essay then shows him over the course of his life to lie and to act thoroughly immorally, close and beyond the legal (a crook some might say).  He exaggerates the wealth he's garnered: he's not as fabulously rich as is made out. Trump has grown rich by schemes which either go beyond legal or stay just within what's allowed. A few people can become rich this way -- Romney had a company which within the law destroyed companies to make huge sums for investors. Trump seems to go beyond this in that he's gotten away with what he does by suing. People sue him, he sues back. These suits attract attention.  He has behaved and now takes on a body stance as a thug.


We know his way is to retort with nasty rhetorical questions that are unanswerable in any quick way back. Friedell's piece brings out how this is the sneer direct. He's a master at relying on sneering. "Who can refute a sneer?" -- much less a self-righteous bullying one based on a complex of false assumptions enough people believe. 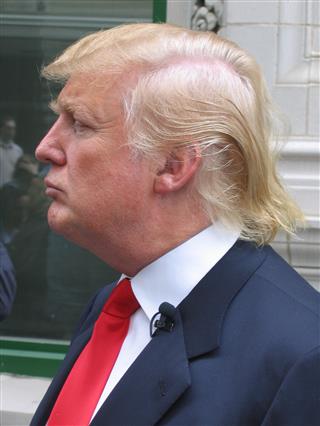 The answer to why the Networks keep telling stories about him is their ratings go up every time he appears, is mentioned and that means advertising dollars. But what I've noticed too is how little information the people say who keep talking about him. They have a tendency simply to repeat what he said or show a clip of him saying something.  Now often these hired talkers for these TV style commercial news-shows say little about a politician who might become or is powerful, but they are not this careful. The oddity comes from a fear of litigation. This fear could also be preventing reporters from exposing his nefarious practices:  they are willing to expose the Clintons, were willing to expose Romney. They and their employers are afraid of this man's tongue and teams of lawyers.


If any reader of this blog can supply URLs to further insightful essays for other readers, let me know. I'll add it to Friedell's insightfully written sketch.

P.S. The comment on sneers in quotation marks was made by a British scholar, William Paley.
Tags: politics, presidential campaign, racism
Subscribe