I begin with last week's election results: take heart, everyone I voted for won! this is a first for me. News reporters say this is a conservative victory: not in Alexandria, Va. I unerringly vote for the most liberal and leftist candidate in sight: a black fireman on the city council; against commercial development of our parks. I also vote for people who have expertise in the area they are supposed to work in: so for the school board I voted for people also with a long history and record you can observe in education. All three won. 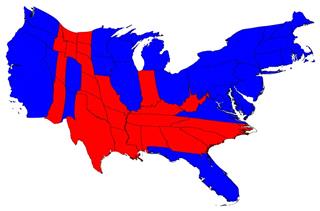 Again people say how conservative Virginia is -- or we hear this in the media -- or that this election showed how conservative all the US is. Above is an adequate adjusted for population colored map of the 2008 presidential election results. (The media is owned and operated by the wealthy.)

In fact along the coast what's called Tidewater in Virginia is mainstream democratic; it used to be heavily US naval people. I live in one of three northern counties of Virginia and while Fairfax (one of the wealthiest counties in the US) generally goes republican, not always. This time Arlington (the third of the three) where one of my daughters live went democratic this election. Yet you will be told that Virginia elections show a conservative trend -- yes some big positions in Richmond (our capitol) went conservative, but in truth what happened was a mixed result. Alexandria where I live is the most liberal county in the state but again often I don't choose the winning candidate. This time Alexandria (City it's called) went liberal democratic and also for people with previous experience and background. You don't hear that reported in the wider news shows.

The extraordinary meanness of the Republicans runnning for president is hardly mentioned; Charles Simic of the New York Review of Books (November 19, Bernie & Hilary and the Future) put it well:

"One expects imbecilities and outright lies from politicians running for office, but not so much undisguised meanness and desire to hurt people. Many of the conservatives we saw seemed moved by nothing as much as hatred. Women, young people, blacks, immigrants, gays, liberals, teachers—the list could go on for pages. The impression I had was that there was a wish to see the lives of millions and millions of their fellow citizens made miserable. The audience loved it. Applause greeted many of these heartless pronouncements. They didn’t sound to me like a crowd pining to elect a future president of a constitutional democracy"

How they treat Veterans: 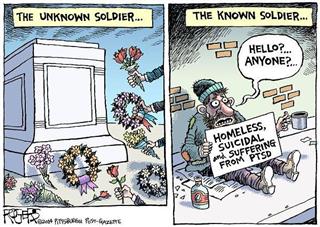 Finally an unusually intelligent article on on-line learning: it shows the importance of the class divide in America and where the malice of those voting for a Trump or his ilk finds one of its sources; the nature of their experiences of institutions and daily life. I know what's meant when the the author said "it's better than nothing."  Nothing was what many had before. The education establishment is moving on-line because it's cheaper and those who run it will make more money.

The real quarrel with on-line learning was pointed out in a humane New Yorker article some months ago on the closing of a high school in Jamaica, Queens:  the change in people's lives (and in his) comes from one-on-one contact (at that high school with no prestige and "low scores") and the hope that a specific encounter can turn a trick, open a door, for you for a fulfilling job, or a friendship. Open University in the UK provided this. That's being cut: the UK gov't is cutting down severely Open University where for little you could go to an accommodating flexible college face-to-face in your local area.

I am from that group only I was lucky enough to live in NYC in the 1960s when the City university was just about for free if you could get there. I took two buses from my apartment.  I agree that the faculty has no malice:  just ignorance. For me it was callousness though  that I saw and I know that it embitters students (ie. me in some moods).

So last on these connections: An essay by George Justice supposedly on his cancer (Chronicle of Higher Education) is from the other side of the wall of class and money -- he is a Dean at Arizonza one of the colleges that is doing online courses, and he mentioned how new people are running the academic parts of his college. He cannot forget for a moment his status, and needs endlessly to justify and to bolster: most of the time these cancer stories are about how I conquered, this one differs in its reference to the job for money and endless hard work. This man might stand for a voter for Hilary, safety it's thought. But read Simic on her understanding of her foreign war policy, the US past, and its results.
,
Miss Drake
Tags: politics, presidential campaign, social life, womens lives
Subscribe