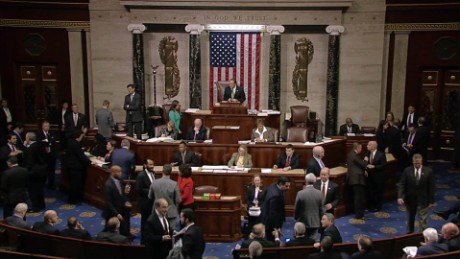 Congress doing its work of funding the gov't

I've never read Tikkum before that I can remember but I am not only impressed by Paxton's analysis of fascism and the demonstration that fascism is growing again in this country -- or has been now for 3 decades unchecked -- but the very worried hesitant explanation by the editor that the paper usually does not go for such a strong point of view but tries to be neutral. Neutral is often mindless - as I've seen too often on PBS reports. I did not know that Ryan has angered his Tea Party constituency by trying to make the gov't work.  He had some of the heat taken off him by his predecessor who managed to do some business he could not have done had he worried that he needed a majority of his suppoters:

I do know that not just the Tea Party group doesn't care if the gov't is shut down; people like the Kock brothers and supporters of ALEC have been working to change the fundamental assumptions and laws of the constitution through rereading perversely words in it (so money now equals free speech for example; bigotry over religion when a company refuses to pay for what they religiously disapprove of is religious freedom).

I am aware that the nitpicking which finds this or that aspect of Trump does not fit the bill is wrong. When for example, you diagnose a disease you do not ask that all the traits the person has fits the bill; you look at the salient important ones.

Let me call attention to this specifcally:

In his magnum opus from 2004 The Anatomy of Fascism, Paxton seeks instead to explain how fascism understood itself; the social traction of fascism as a political movement; and what kinds of political and economic conditions were necessary for it to grow and eventually succeed.  Rather than presenting a series of unalterable criteria that read like a check-list, Paxton shows how fascism develops in context, embodying and taking advantage of a series of “mobilizing passions” to build and maintain a following.  The leading of these passions include:

In all of these ways, Trump not only reveals that he is indeed fascist, but perhaps even more importantly that his followers – even as some of them are in the habit of describing their own enemies on the left as “fascist” and who have loudly professed their disinterest in a caudillo – are actively seeking fascist solutions to problems that ail them.