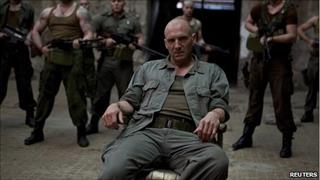 Ralph Fiennes as the ferocious bully Coriolanus who is destroyed because he cannot endure and then cracks over campaign interviews ....
"First, are you our sort of person?" -- The Applicant, Sylvia Plath
Friends and readers:

I read briefly about Marco Rubio's "goof" in the latest of these awful staged interviews. The coarse corrupt bully Chris Christie then lit into him, with raw insults. I don't feel sorry for Rubio because of what he'd do to a large majority of US citizens were he to become president. Not as directly lethal as Ted Cruz, but setting up the same impoverishment and deprivation. Plus spread war -- murder and destroy everywhere, creating permanent damage on all communities, individuals left. Indeed all these Republican spectacles have been for the most part circuses of dominating stupidity and cruelty.

Do any of them have any idea what a battlefield is like, what is the experience of war? do they understand anything about death? starvation?

I then turned to Clinton's latest gambit: women who don't vote for her are the "sort who betray other women." Right. From the woman who helped her husband destroy welfare -- a program for women with children who can't work, are not hirable for living wages.

It struck me that the thing I most detest about going for a job -- the interview -- and what has seemed to me most irrelevant  to doing the job is what these campaigns are all about. I've asked myself sometimes, why do people conduct these, as so often they know who they are going to hire beforehand (as the person has come with connections, been someone's friend, has a resume, or credentials that matter or show needed skills) and yet they are sancrosanct.

At AU where I am a volunteer (unpaid) I found the day I was asked to come in and "learn" about teaching, it was simply demanded (with no previous warning) that I teach in front of the whole group for 3 minutes or more. The woman wanted me to get up without a piece of paper and plan in front of me. I refused and she saw I would not give in. She then saw or made as if she saw I am a competent teacher and stopped me quickly. Nonetheless I had to hear comments from other people around the table -- made quieter because she had first intervened to praise -- from this tape of myself on the TV I too had to watch. Others around the table did not get such nice intervention and they were dependent on the social consensus this was to be "constructive."  Nonetheless I saw some hurtful things said. Had I know this would have been demanded of me, I might not have shown up. Especially the video-taping. After I went up and asked if it would be destroyed. I was assured it was not saved.

The reason autistic and Aspergers people have an employment rate of 10% is they can't get through these interviews or perform such encounters with strangers inadequately. The gov't agencies set up to help Aspergers and autistic people get jobs are useless because they cannot eliminate the interview or even affect how it's done, by whom. In the last two years my younger daughter was enduring these a new absurdity had been stuck in -- if the purpose was to get to know if the person would fit in with the actual people worked with or had the skills -- these firms hired personnel from outside the office to do the interview. It then became a true hazing, after which there would be another round of interview by the actual people who you might work for -- often the higher bosses, not the ones in your office. In academia for tenured jobs I've seen rounds of interviews go on, some of them in effect happening over a day. So continual gruelling in effect -- though not admitted to.

Irrational or contradictory --  if the purpose were to ascertain say social skills even -- are those jobs I've held myself where no interview at all was conducted. Barely a conversation on the phone. This was for teaching jobs, once for working in a library, another time as a secretary. In each case something individual happened and the office couldn't be bothered - or someone said my credentials as a teacher were so solid and degree there, so no need. Yet teaching is a social encounter, a performance in front of a class.

Well these people are endlessly interviewed, hazed in front of millions of people -- the excuse is this way you are learning about them as human beings. Are you? My behavior in front of the group at AU was a performance and only one aspect of me.  In these campaigns they take questions which are intended (it's said) to, ferret out their past record. The result is endless lying, distortion.  The average person will not bother to read columns in newspapers telling about this. But that's not why it's done -- I suspect many of these people (candidates, supporters and reporters alike) thrive on this ratcheted up excitement.

Jonathan Swift was so right about human beings. And my recent revelatory reading of Henry Fielding's implied views in Tom Jones. 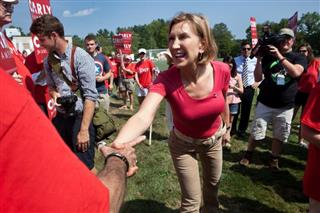