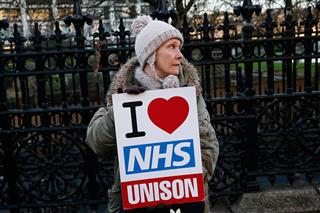 Each issue of the London Review of Books has a two page, 8 column diary entry, and often it's one of the best things in the periodical (and if often has many good articles). For Feb 4, 2016, a "junior" doctor, Lana Sprawls, writes a diary of her life. What she shows is that the UK gov't is attempting to destroy the public health service, the National Health as it used to be referred to when I lived there (now NHS) by de-funding it utterly. De-fund all services to patients, de-fund home care, and de-fund doctors. Doctors have always worked long hours; now the gov't is relentlessly doing all they can to cut pay, add on "unsociable" hours (re-define this), have a schedule where it is impossible for a doctor even to think of following up on a particular case:
http://www.lrb.co.uk/v38/n03/lana-spawls/diary

She ends on the first strike and its results: 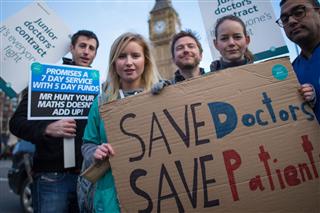 Although these practices go back fifty years (read a comment on the diary just below it, published by the LRB), I suppose the increased grinding down is based on a hope is these doctors will want to privatize, so they can call their own hours, pay, structure their own practice on their own or with groups of other doctors.

The National Health once saved my life. In 197 Jim and I were in Kensal, the Lake District, and I miscarried. They took me in, it ended in an abortion to save my life; I was there for 4 days. I wasn't charged anything. Everyone was very decent and kind.

Once a group of people who form a legitimate gov't give a people an essential service, it is set in place across the country, enforced, and everyone in the country begins to enjoy it (say schools too), it is very hard to take it away -- they are many, you are few, so you must do it by stealth, by lying, by slow grinding steps. In the US social security has been badly hurt because it's not properly funded, and under attack; medicare is hurting because some of the services it was meant to cover (like hospitals) for many can only be gotten if you pay for extra medicare (called Medicare B or D) unless you were lucky enough to be insured by an insurer who at the time provided for this.

I found myself identifying further because before I retired from college teaching in 2012, for over 40 years, the way that I was underpaid, overworked and despised for it was by defining my position as "adjunct" part-time. "Junior" doctors are people with long service and experience but they are only allowed to become "consultants" after they pass hurdles which take a long time and are set up in such a way as the particular person may never pass it. 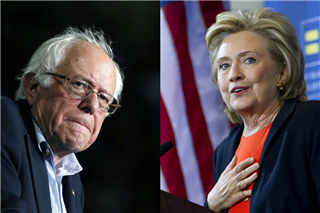 This connects to the present US election: all the Republican candidates want either immediately or by slow death destroy social security altogether, medicare, Obamacare, all are for the various privatizing charter schools, all are against any minimum wage, are on record doing all they can to destroy public employee unions and indirectly all others, slashing city services.

The two democratic candidates, Hillary Clinton and Bernie Sanders are on record for being for extending social security, medicare, the Affordable Health Care act, for upping the minimum wage. Sanders's record is much better than Clinton's: with her husband as president she did support destroying welfare (a program which supported poor women with children who couldn't work or get living wage jobs for all sorts of reasons) by stealth: the pretense was they were helping women to get off the rolls; they have just disappeared into homelessness, despair, living who knows how; she was for his destroying controls on banks and the result has been thousands and thousands of evictions from homes, still going on (and one of the causes for disliking her); she has been for charter schools.

The argument is that if you vote for her she will win against the republican as Sanders will not. Well her record in campaigns does not support the idea that she is a winner. The argument is that if Sanders wins, the republicans will act as they have towards Obama, and thwart him at every turn. It is possible a democratic congress could emerge if he were strong enough. The problem is turning back gerrymandering. Both of these are pragmatic arguments. Many will vote on what they want the president to try to achieve.

FWIW, I will say frankly -- as no one seems to want to put it this way -- Mrs Clinton has a hard time winning elections because she's a woman. She is no longer attractive; her neck is very wrinkled. She puts women as well as men off. The dust-up when a couple of her friends ever so gently in the case of Steinem to pressure women into voting for Hillary as a woman boomeranged.

To me the whole vexed debate showed that women do not identify with one another in the way Obama could count on black people identifying with him once he was seen to be black (not half-white or a white man in black skin). Apart from welfare she has been on the side of women and liberal social causes all her life. If more women voted for Sanders than Hillary (55 to 45%) a whopping number of men voted for Sanders (70% is one figure I saw). Being a woman is not an asset since women do not identify with one another (see comments below)

Sanders is no socialist; he is like Franklin Delano Roosevelt, will shore up capitailsm, strengthen programs that help people and work slowly once again to decrease inequality and all the miseries all its structurings entails. But he will be attacked grossly as (in Trump's usual crude obscurantist language) "giving the store away!" Whose store? the 1 %; no the reference is to African Americans; that Sanders will give up huge amounts of money which should be whites or go to whites to black and undeserving "losers."

Election campaigns as presently conducted bring out the worst in all candidates. See my previous blog.