How Flint came to be poisoned; Nestles profits hugely selling the Michigan water it gets free 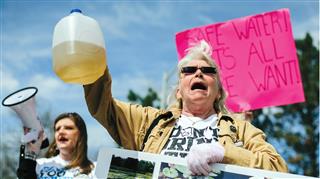 I try to put on this blog information which you might not come across elsewhere vitally important for us all to know.  I realize that aspects of this story have been told on various places on the Net, in periodicals, are available in public records.

But tonight Amy Goodman on her DemocracyNow.org put together a series of videos that tells the story clearly and rapidly in one place: you learn from Claire McClinton how and why the city Flint, Michigan came to be connected to poisoned water, the motives of those doing it, what laws gave them the right. Eric Mays tells her see how the gov't officials stopped opposition from the get-go -- the aim was to get people to agree to privatize and make a bonanza for a corporation. Goodman interviews an investigative reporter, Curt Guyette, of the ACLUC. All the while Nestles company was shipping out of the states hundreds of gallons a day of free water, how Peggy Case, Glenna Maneke, Terry Swier organized to fight Nestles in court and expose what had been done were harassed by (among others) Nestles and the FBI. As one person said this is not a crisis about water, it is a crisis about the erasure of democracy in cities around the US, It's also environmental racism as the cities which were put under this manager were overwhelmingly African-American.

There are five parts to this story: If you cannot play or reach the YouTube videos or listen to the podcasts, I've copied out the introduction and heads of topics.

In 2014, an unelected emergency manager appointed by Michigan Governor Rick Snyder switched the source of the city’s drinking water from the Detroit system, which they’d been using for half a century, to the corrosive Flint River. Soon, residents were complaining about discolored and foul-smelling water, which was plagued by a host of problems. First, the water was infested with bacteria. Then it had cancerous chemicals called trihalomethanes, or TTHMs. A deadly outbreak of Legionnaires’ disease, which is caused by a water-borne bacteria, spread throughout the city, killing 10 people. And quietly, underground, the Flint River water was corroding the city’s aging pipes, poisoning the drinking water with lead, which can cause permanent developmental delays and neurological impairment, especially in children. Since the news about the lead poisoning broke last October, a slew of Michigan public officials have been ousted, the FBI has opened an investigation, and a special counsel for the Michigan Attorney General’s Office has announced top officials, including Governor Rick Snyder, could face criminal charges, including manslaughter. Well, this past weekend, we went to Flint to learn the remarkable story of how the governor and other officials ignored residents’ complaints for a year and a half, and how the city fought back—with protests, citizen journalism, a new mayor and a massive resident testing project. 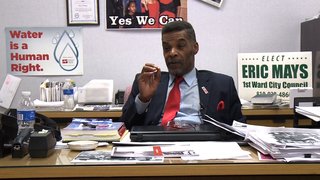 What did GM & the Governor know? GM stopped using Flint water over a year before emergency declared