A good political poem: Muriel Rukeyser's "I lived in the first century of world wars ... " 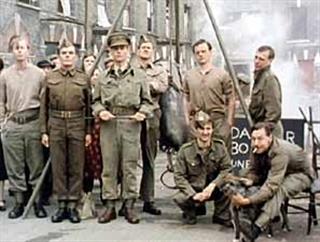 The cast posing as the Bomb disposal unit posing for photos in a town they are trying to rid of planted landmines, about half of them die or are badly wounded over the course of the 13 episodes (Danger UXB, 1979, one of the great mini-series of the BBC -- many of the actors worked for years in mini-series, yes that's Anthony Andrews as Brian Ashe, the commander of the unit)

I lived in the first century of world wars.
Most mornings I would be more or less insane,
The newspapers would arrive with their careless stories,
The news would pour out of various devices
Interrupted by attempts to sell products to the unseen.
I would call my friends on other devices;
They would be more or less mad for similar reasons.
Slowly I would get to pen and paper,
Make my poems for others unseen and unborn.
In the day I would be reminded of those men and women,
Brave, setting up signals across vast distances,
Considering a nameless way of living, of almost unimagined values.
As the lights darkened, as the lights of night brightened,
We would try to imagine them, try to find each other,
To construct peace, to make love, to reconcile
Waking with sleeping, ourselves with each other,
Ourselves with ourselves. We would try by any means
To reach the limits of ourselves, to reach beyond ourselves,
To let go the means, to wake.
I lived in the first century of these wars.

Muriel Rukeyser, “Poem” from The Speed of Darkness.
(Vintage Books, 1968)

This morning there was a bomb attack, "massacres" these are called, at least 28 dead reported in the Washington Post: it occurred all over the Brussels airport Yvette and I were in going and coming to Leuven, Belgium this past September. Another bomb went off at a train station. Yvette and I also used the trains.

I remembered the Dr Seuss cartoon on the 1940s where the US is pictured as dismissing the immiseration of the rest of the world. This morning I'd add the EU with its anti-refugee policy, and NATO's decades of policies in Europe, the US and Israel's govt's in the middle east. 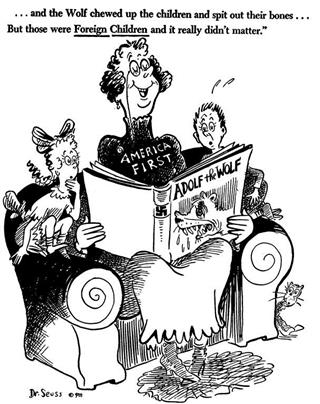 It was also the second day of spring: out of the darkness, I have tiny daffodils, fragile, because of climate change upsetting the flower's growth patterns: 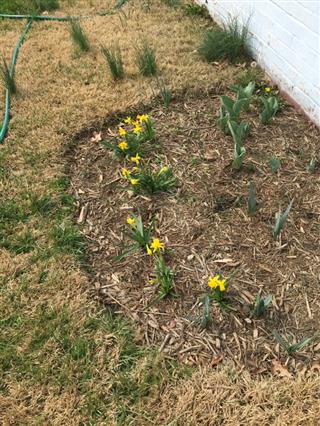 "...Song falls silent, music is dumb,/ But the air burns with their fragrance,/ And white winter, on its knees,/ Observes everything with reverent attention.” [― Anna Akhmatova]