I've not written for a while and telling published reports have mounted up. Jim used to say both a failure of imagination and the refusal of most people most of the time to take anything seriously which did not affect them directly and today, was part of the core of what went wrong in social experience. I'll add the qualification, indifference or utter passivity (doing nothing at all) upon the part of those who can care and can do something,  We forget how at risk we are when others are just thrown away or abused and even tortured. No person is an island ...

Evils that befall the world are not nearly so often

caused by bad men as they are by good men who

are silent when an opinion must be voiced

Without hind sight, it's hard to tell which is the most important -- Trump could lose badly. Just now many will think Cruz suddenly deserting his supporters, the Republican establishment caving in to making their conference a crowning of Trump as their party head salient events. (Cruz only cared about winning for himself; he did not care in the least who won if he could not.) But the torture of mentally ill patients put in prison, and the treatment of animals as non-sentient things are if anything more pressing. Right now, as I type, their suffering is on-going.

Still I'll start with why no one should vote for Trump, or just in case you were in any doubt about how ignorant Trump is about nuclear bombs: what they are, what they can do, and need more ammunition to urge your friends to get out there and vote for Hillary or Bernie when the time comes, here is Jeremy Bernstein (NYRB) with long verbatim quotations about what Trump has now said when questioned about his attitude towards these bombs, war, and national alliances (which he seems to think don't matter at all, nor does he seem to value building and adhering to trust in relationships). I am aware many readers would not take Trump's remarks seriously and those who do are relying on others around him to control or shape his conduct. He is just one man.  He will learn, this is just an act. Any way the other sides will punt, they will flinch, and when Trump bullies whoever, the other side will not throw a bomb -- as happened during the Cuban missile crisis. I wouldn't count on it. See how so many national leaders couldn't care less about the destruction of their or nearby peoples. Here my only recourse is to urge the reader to look at photos of Hiroshima and Nagasaki after the bombs were dropped.

Smaller points are how he is going to cut the taxes of billion- and millionaires yet further, while promising not to cut social security. I am not aware what his latest views are on the Affordable Health Care Act.

The moral disaster has been with us for a long while; it began a new phase at the time of 9/11. So much in the public media made lying, bullying, cheating of every kind even admirable; sympathetic identification, compassion, knowledge of all kinds dismisssed. And now we see visible unashamed racism (murdering black people), sexism (it's okay to rape a woman) since the Net and photographic devices have made them documentable. The truth is not enough Americans are truly horrified by Trump. He is in the American grain, their character. Well to me he is a monster beyond the pale. I shall just have to turn away and pay no attention to politics as it is just too gross, painful and frightening to see such a man be given such power if he wins. And it's more than possible.

Shame, anger and resistance are the appropriate response to this nomination.

It’s so worrying as Hillary Clinton is so weak with voters: consider her “New College Compact:” lower costs for students, expand Obamacare, family leave, veterans and child services, a surtax on the very wealthy, rates on capital gains, change the immigrant system carefully — all thought out — then Sanders beats her in Indiana. Listen to him:

I've a second story:  Oliver Sacks died last year, and some may know that towards the end of his life he campaigned to expose and deplore the shutting down of mental aslyums. With all their flaws, the person had a sanctuary, was safe within a bed, a half-room, a ward, eating cleanly, sleeping in a bed. Having witnessed myself how life on the streets for the disabled, mentally disturbed, addicted, unemployable for various reasons, is horrific for those who are not the violent alpha bullies (Trump types), I agreed. But I've been taught differently by Ben Taub in yet another important New Yorker article (May 2, 2106), "Madness." by Eyal Press. The mentally ill are not put in prisons and literally tortured, taunted, driven to kill themselves. Whatevery you do, do not let your friend, relative, beloved friend go into an institution in the US. It may be as bad in other countries, in the UK they are not yet privatized. But Jenny Diski's account of these (she died this week) suggests to me they are as potentially bad. 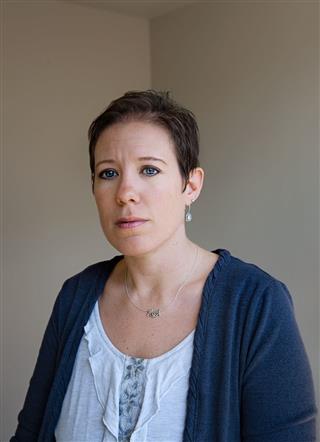 A social worker who faced retaliation for whistleblowing ...

Diski says what ignited her mind strongly in the discourse was the account of the asylum. Why do so many people attack the mentally distressed? I've just written and published a review of a book called Fictions of Affliction where I try to answer that question.

The way she was treated reminded me of the few doctors I had told about my depressive and anxiety problems before I went to Kaiser "Behavioral Health:" note the term; although there was a place to talk -- and get pills -- they deserve the D they got for any adequate treatment. I think they helped my friend Eric into his suicide. But I stay with Kaiser because my experience "outside" has often been worse and I've been fleeced on top of it.  I had been suffering migraines and bad headaches; some one recommended a doctor (that's all there was before HMOs). I had to wait half an hour or more to see him. I was not told the price before of course. I found myself facing a man sneering at me, dismissive and when I left his "consulting room," the receptionist demanded $37.50 for 5 minutes of his time.

For the second, we can in the US vote for representatives who examine and expose conditions in prisons and mental aslyums allke. We can ourselves try to participate in a transformation of attitudes towards the mentally disabled and distressed. We can stop worshipping physicians (out of fear) -- they make mistakes. 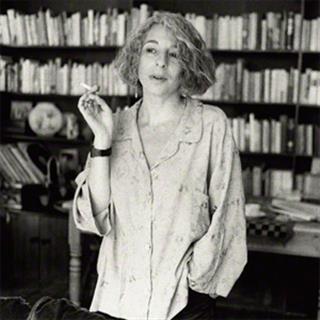 In the shelter of her home of books with her "poet."

Jenny died last Thursday. I was expecting it. I had noticed that more LRBs had gone by without her than usual. I had told myself, she must be very ill now, near the end. When a friend emailed me to tell me I cried on and off that morning. I felt her to be an intimate friend, almost. I loved her essays, travel writing, the novels, her book on animals. She spoke up for the vulnerable, the lonely, those who felt and acted differently from many, and for the depressed -- as far as I read, she seemed almost never to think cant (well once in a while). I first encountered her in the LRB in a diary entry telling the full truth about when she was raped at age 14. It stayed with me because she was more accurate about how assaults happen: first she did go back with the man to his flat. As I grow more aware of how much my cats are reacting to me, how much they understand, I want to tell her Bundy was waiting for you. I've written at length about her too often.  I could easily have been in an aslyum. My parents let me be and at 22 I found Jim, and reader, I married him. Tributes from The Guardian and Tim Adams's memory of her and the last columns. Robert Laird in the Paris Review characterizes how we now die in the world through the Net and her characteristic tone and stances so well. 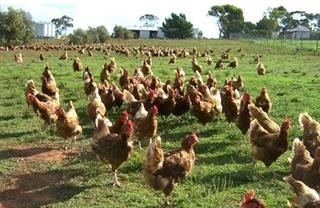 Hens and chickens in a free-range farm

The US cultural group (apparently large) which admires a bully, doesn't mind a crook, worships power, and expresses glee when confronted with any sensitivity is at the core of what's happening. I take it the reader of this blog is not one of these -- or you would not have read on.

So I've a third and last important reportage story for my reader to take seriously to heart. Peter Singer's "Open the Cage!", a review of Wayne Pacelle's The Humane Economy. Who takes seriously the suffering of animals? who thinks that pleasure, comfort, enjoyment in their lives matters?  Not corporations seeking to undercut competition and make the most profit possible.  From the article:

"The problems of chicken production are not simply due to the fact that the birds are raised in vast crowded sheds, in air reeking of ammonia from their accumulated droppings. The more fundamental problem is that today’s chickens have been bred to grow three times as fast as chickens raised in the 1950s. Now they are ready for market when they are just six weeks old and their immature legs cannot handle the weight they gain. As a result, according to Webster, about one third of them are in chronic pain for the last third of their lives.
Given there are eight billion chickens raised for meat in the US every year, that means 2.6 billion birds are experiencing chronic pain for the last two weeks of their lives. Industry reports and scientific journals provide evidence that each year 139 million chickens don’t even make it to slaughter. Their legs collapse under them and, unable to move or reach food and water, they die of thirst or they starve. Or they simply cannot cope with the conditions they are living in, and their hearts give out. Or they die from the stress of being rounded up, thrown into cages, and transported to the slaughterhouses. In one way or another, they suffer to death. The humane economy has yet to have an impact on this huge industry and the unimaginable quantity of suffering it creates."
But it seems that in Europe where the EU has been able to make its will felt across nations, it seems that you can get human beings to care about non-human animals if you pass laws that prevents groups of large numbers of people from obeying a capitalist work ethic about making the most money out of the lives of hens, chickens, pigs, lambs. Today in the US neither the consumer nor animals wishes are paid any attention to -- except a tiny group of family farmers. Having read this article and spending so much time with my cats, I've now vowed to buy from Whole Foods the free range chickens, hoping the label is truthful.

If you can't become a vegetarian, you can when it costs you little in time and space not purchase animal parts from places where there is no proviso for the animal to live a decent life. Cats do wait for us. Dogs love us. They are alive to our moods and apprehensions. Can you be smart enough to see that in your animal is a similarly smart presence? As you want and need kindness, begin here. For myself Izzy and I eat lamb patties and chickens. I can't do much about the patties (I don't know where the minced meat comes from) but I'm buying free-range chicken whereever I can. That means for about 3 out of every 6 meals of chicken. We can make efforts to have a non-meat meal once a week and for myself when I'm eating alone avoid meat and substitute vegetables. I love vegetables and cheese especially. 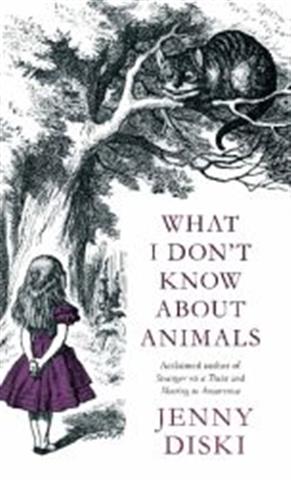