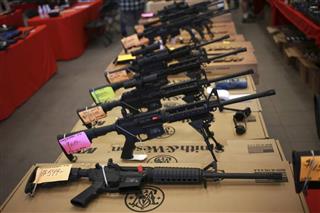 A row of Smith and Wesson AK-15s, the assault weapon of choice since WW2 -- on sale to all at a recent gun show in Loveland, Colorado

In the Washington Post a couple of weeks ago, a reporter named Michael S. Rosenwald reports on a paper by Michael Stone, a forensic psychiatrist at the Columbia College of Physicians and Surgeons in "The Anatomy of Evil." He points out the uselessness, counterproductive waste of money of arguing that mass killers are mentally ill and proceeding to pour money into stopping mentally ill people from going on killing sprees. The gun industry has done all it can to promote this, branches of psychological and psychiatric professions don't mind. Mentally ill people don't behave in this kind of coordinated planned fashion. Another category of "killer" is someone with a "personality disorder" it's said (we still cannot face that people can be this way and not abnormal); these are people who "exhibit" "antisocial or sociopathic disorders" like "sever paranoia, callousness or a sever lack of empathy but know exactly what they are doing." (Thurs, May 20 ,2016, A1 and A18). This type of personality is found among wife- and children-abusers. They are average people who when dealing with those not under their power behave in ways that are most of the time socially acceptable. The experience of abuse from the woman’s point of view is to be yoked to an egoistic, ruthless sociopath. But it is a mistake to take such man as crazy. They are not. They are rational people, knowing what power they are given and what they are allowed to do and take advantage of it, most of the time hiding what they know others will fear and or abhor him for. The US is willing to allow such people to buy assault weapons, live bullets and any other kind of gun they want lest (it's said) some "innocent" individual cannot get a rifle because he is somehow stigmatized by controls.

Two days have gone by since yet another huge massacre enabled by the free sale of assault weapons, rounds of ammunition, guns of all sorts to anyone who wants one basically.  The man's excuse was hatred for GLBT people and his imagined allegiance to the Islamic state. He was murdering people on behalf of ISIS who of course hate anything but macho male heterosexual behavior.  It just happened to be a place filled with hispanic people -- very vulnerable.  Meanwhile no one in congress has proposed to reinstatement of a ban on assault weapons that was allowed to lapse 10 years ago.

On the same day the Orlando massacre occur another man, this time white, was arrested by pollce: he had in his car, assault weapons, rounds of ammunition, and guns. He was on his way to a gay pride parade to murder as many people as he could.  He was allied to those people in the US who have supported legislation in various states to "protect public bathrooms" from GBLT people; read these laws turn out to be stalking horses for allowing landlords, employers, business people to refuse to rent, hire or allow GBLT service of any kind in their terrain. This is (due to the supreme court's decision in the case called hobby lobby) now called religious liberty.  The supreme court majority until the death of Scalia was brought to us by thes same people who have filled state legislations with reactionary republicans (pro-business without qualification).

Today too (a blog is a web diary) I received on face-book today an "X years ago today" type reminder. I am unsure how clicking and sharing these again on one's timeline generates profits for face-book but I feel sure it does. I know the algorithm which allows me to see FB friends' messages on my "home" feed is so structured that I see only 5-10% of these people most of the time, so the way the experience of face-book is generally structured has nothing to do with my needs, what I click on as "I like this," who I comment on, what "pages" I belong to or like. The institutional-business running this page shapes my experience, what is allowed and not. I was invited to share a blog I wrote two years ago, to put it on my timeline; I did so: it was about how the DMV had finally lifted a ban on me from driving and enormous difference I was immediately experiencing in my lfe.

My experience two years ago was that after a 7 month ordeal with the DMV where this institution refused to believe doctors' reports, my lawyer said because one of them had refused to show my full medical records online (my psychatric/psychological record and drugs prescribed), I was granted a reprieve and could drive again .My life was returned to me. This after I had paid the lawyer some $4000 for services I couldn't have done it without. Mean was the way I was talked to on the phone, condescending and (I think) calculated to make me angry so I would not be able to sound reasonable The DMV is run by people citizens never voted in, people who are part of a local elite, there are appointed offices that are powerful within the state employment service where everyone is anxious about their own jobs and place in the organization.

Today I'm thinking about how Americans continue to endure the control of their lives by institutions, what they ingest, what is put onto their fields (Monsanto's predatory spraying), as if they didn't notice this, as if they didn't mind.  The only protest is against those even more vulnerable to these institutions.   At the same time as reasonable gun control legislation is not even broached by an irresponsible congress, most individuals of which are like the DMV employees concerned first about their place in the organization, second their jobs (no one has lost an election for refusing to vote aye on gun controls of any sorts that are effective) .It was easy to let the assault weapon ban lapse: no vote needed.

We are told those who follow Trump are angry because they are powerless and their needs unaddressed, but they are not salivating to stop the power of institutions, to have revolution which attempts to return power to the wide electorate (them), but rather hit out at other people suffering as much and worse than them, It is importantly noteworthy that Trump is not only for banning all Muslims in the US and somehow flagging all around them that these people are Muslim (shall they wear yellow stars?) but has banned the post from his press conferences. This is the second mainstream respectable newspaper excluded. Next step when president?

Powerful institutions in US life control our behavior and what are our life's possibilities far more than any gov't group we vote in. The DMV and NRA are alike in this. The NRA is worse because this is a privately-run and owned institution, not subject to scrutiny by the public. They are funded by gun manufacturers. We cannot stop people from hating other people; we can remove deadly weapons from their hands.  We need not scour house by hour to remove guns. Bullets become obsolete; you need merely as a stopgap measure control the sale of bullets along with guns. Within two years unless the gun owner has the right (we should call this a privilege but a reactionary supreme court has turned a constitutional amendment meant to give states the right to have armed local militias into the right of an individual to own a gun) to buy more bullets, the guns would be useless to the owners.

Of the four people still taking the stage for the presidency, only one not put on major TV, Bernie Sanders called for an outright ban on assault weapons and effective control on guns, and Obama pointed out that inaction on this is a choice. Neither fingered the NRA.  Hillary Clinton blathered on about responsible controls being needed, and I've already repeated what Trump said -- except I left out he insinuated that somehow Obama (because the belief is allowed to let stand in his rallies that Obama is a Muslim) was implicated.  Obama has done all he humanly can to promote and actively seek (after a massacre of kindergarton children in Connecticut gun control legislation.

There has been an attempt by Diane Feinstein in the senate to re-vive legislation to keep assault weapons out of the hands of terrorists on a "watch list" -- said to have no chance of passing. Institutions and corporations trump congress in the US easily. 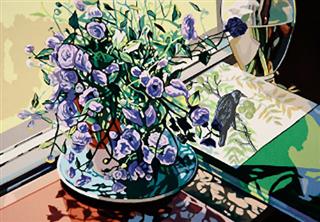 Not all institutions are bad: here is a painting by Jane Goldman (21st century) called Audubon May.