Orlando Massacre and Hatred of Women: domestic violence as a hate crime

This morning in the Washington Post I noticed another ominous turn in the fallout after the Orlando Massacre: the police are now investigating Omar Mateen's wife to see if she was an accomplice to the massacre. Americans will recall how Trump said it's okay to murder the families of Muslim terrorists. 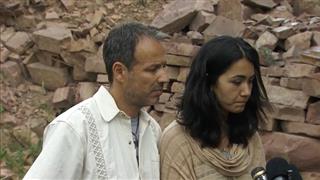 Sitora Yusify with a male family member -- perhaps a brother

Last night I was first alerted to the attention now being paid to this unfortunate woman, Sitora Yusify, because Amy Goodman devoted a segment of her news-show to the question whether in fact there was evidence of hate crimes in Omar Mateen's life and it was not seen because domestic violence is not defined as a hate crime. Goodman interviewed Soraya Chemaly, journalist writing in Rolling Stones. I think domestic violence like rape is a hate crime: it is an outgrowth of utter disregard for and hostility to women. Shortly after Salman married Mateen he began to beat her nghtly; he tried to separate her from her family; he made her his punching bag. She said (this is outside my culture and ideas) that she "tried to see the good in him" and tried to stay but was terrified and in pain. Her family remained close, knew and literally rescued her. They came to the house and this family wrestled her from this man. She is now divorced from Mateen.
Those who read my blogs will know that a few weeks ago I read in the Washington Post a description of the kind of person who commits massacres (because they can get assault weapons, if they couldn't get them and just guns, they would kill far fewer but still kill nearby people, hurt them): it struck me as a description of an abusive man. I had read some of these while reviewing Mary Trouille's Wife Abuse in Mid-18th century France. I had just been reading Charlotte Smith's letters and that clinched my sense that Smith's great tragedy was not a complicated will but that she had an abusive husband who took advantage of women's powerless before any legal document and tried to destroy her by depriving her of money (by not signing) because she publicly left him and then publicly exposed him because he would not give her and her children the interest owed them -- desperately needed to live. And the men all around her identified with him. She hid his violence to some extent because like most women she was shamed by her experience.


Yesterday writing about how the massacre was enabled by the NRA who make money from the gun industry I began with an article which based on studies shows the idea that people who commit massacres are mentally deranged is a red herring, false, and supported by the gun industry. That article described a type known to me from my reading as the sort of man who inflicted violence on his wife and family regularly.
From Chemaly and Goodman now I know that those who conduct women's studies know that the same type of person who commits hate crimes commits domestic violence. Goodman had a woman on her news-broadcast who has long worked in this area and who said it has been impossible to get men or people to acknowledge domestic violence as a hate crime.
Now look at what's happened. Mateen's second wife, Noon Z Saleem is being prosecuted -- or the FBI is seeking to prosecute her. She did not kill herself, is not going to kill herself. It reminds me of Justine in Frankenstein wantonly hung on the flimsiness of circumstantial evidence because the community wanted a scapegoat to murder when a child was murdered and wanted to believe in murdering her they were safe.  Saleem was by his side when he bought the horrific ammunition and says she tried to persuade him not to commit this atrocity.
She was living apart from him; photos suggest they had had a son. It has been discovered she was once to this gay club with him; this is enough to create hostile investigation of her and arrest her.

Update 6/17: i'll take this opportunity to report that the Florida police have now hounded Saleem to where she is said in the press to have "confessed" that Mateen texted her on the day of the massacre. She has told those members of the press she can reach that much tha is being said about her now are either distortions of her life or lies.


We see here a man who manages to get two women to marry him, who holds jobs (however briefly), socializes constantly, himself bisexual perhaps. Yet stories are surfacing about his mental derangement or psychoanalysing him with a view towards compassion.
******************************

I've now read two books on women who commit crimes where there is violence and murder: they do it quite differently, indirectly, and secretively if they can. The clearer more cogent one is Patricia Pearson's When She Was Bad, with a sensational cover (alas) and subtitle: How and why women get away with murder. The book does not say women got away with it, as in all cases Pearson was able to research the crime because the woman was caught. The publisher and editor framed the book with implicit distrust of women. The old play Arsenic and Old Lace, so hilarious plays on our intuitive sense that women socially behave differently from men. Both studies attributed this to the circumstances of women's lives, but it is also in their natures. We have yet to see one gun massacre committed by a woman alone.


Nothing grates on me more than these assertive stories about how women drive men to be violent to them because they are violent. Examples are found of women violent first supposedly. The focus on men being raped is used to say see not just women suffer, men do, not to focus on the person who commits rape, and its effect is to diminish concern for women. This is one of the areas where this obscurantist theory of performance and denial that there is an essential genetic character associated with genetic femininity does harm to women, because women are in such circumstances also because it's in their nature to live in groups and set up homes for themselves.

I hope neither of these two women who unluckily connected themselves to a vicious man are scapegoated. I believe one of Trump's positions is it is okay to kill by drones the families of men who are alleged to have committed acts of war outside a state sanction.