Barry Blitt has caught the glint in her eye I've noticed more than once: 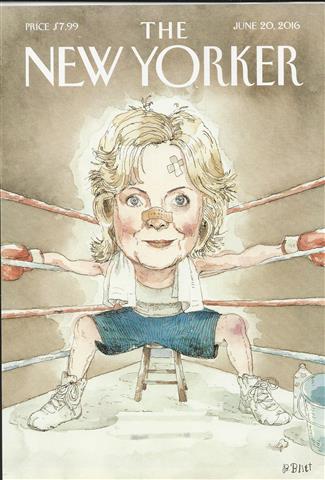 I've used this blog to bring together important informative articles, essays and news reports before, and over the past few days new researched information, essays and evidence from the DNC archives about Trump has helped solidify the case that Trump is worse than an allowed (by law) fraud.  I have three lucid interviews and two columns to share, and conclude on an opinion piece on the hatred beginning to be spewed out at Mrs Clinton.

First the three interviews, each of which brings out all the evidence that Trump is a crook whom teams of lawyers and American law set up to protect corporate self-enrichening pests continue to protect. See Krugman (below) on the principles of the Republican party:

In the first she interviews Cay Johnstone of USA Today there is "incredibly strong evidence that Trump has committed tax fraud.

Donald has done a very good job of trying to keep a number of things out of the public record and shut down investigations, but I found two tax appeals he filed from the year 1984, one with the City of New York and one with the state. And in one of these two cases, Donald filed something called a Schedule C. That’s what a freelancer files. He reported zero income and $626,000 of expenses, with no receipts and no documentation. That’s something that could be construed as tax fraud.

During the hearing, which lasted two days, the CPA and lawyer who had done Trump’s tax returns for years was shown the tax return, and he said, "Well, that’s my signature, but I didn’t prepare that tax return." Now, it was a photocopy. And, of course, you can put a name on a document with a photocopy machine. My first big national investigative reporting award was for just such a device used by a corrupt Michigan politician. And The Trump Organization didn’t respond to any of my questions—the Trump campaign—about this. Donald was hit in one case with a 35 percent penalty. And in the other case, the 25 percent penalty was not applied, only because nobody could find the original tax return, which I think suggests that a photocopy is what was mailed in in the first place.

It also shows, in these two cases, that in the year 1984 Donald paid no federal income taxes. And there’s very good reason to think he doesn’t pay them now, because of a provision in federal law that allows large real estate professionals to live without paying income taxes.

In the last she interviews Steve Reilly also of USA Today to show that hundreds of former employees and contractors have accused Donald Trump and his businesses of failing to pay them for their work. Victims have included a dishwasher in Florida, a glass company in New Jersey, a carpet company, a plumber, 48 waiters, dozens of bartenders at his resorts and clubs, and even several law firms that once represented him in these labor lawsuits. "Hundreds Allege Donald Trump Doesn’t Pay His Bills."

lawsuits involving allegations of nonpayment against Donald Trump’s companies, and specifically more than 60 lawsuits, along with hundreds of other mechanic’s liens, judgments, other filings, which indicate there are allegations Donald Trump hasn’t paid contractors, workers, employees for their services.

Specific examples. The article discusses the Friel cabinetry company, based out of Philadelphia, which did work on the casinos in Atlantic City in the 1980s. They built bases for slot machines, registration desks. And there was a dispute at the end of their work over about $83,000. And the allegation is that Donald Trump didn’t pay the company for the work, which eventually contributed to the bankruptcy of that company, which employed about 80—I’m sorry, 20 workers in the 1980s.

The first is by Paul Krugman in the New York Times:

It’s not about the fraudulent scheme that was Trump University. It’s not about his history of failing to pay contractors, leading to hundreds of legal actions. It’s not about how he personally profited while running his casinosinto the ground. It’s not even concerned with persistent questions about whether he is nearly as rich as he claims to be, and whether he’s ever done more than live off capital gains on his inheritance.

Krugman shows that what Trump has done outrageously is done in all sorts of much more circuitous ways by many Republicans and that on principle they are a group of grifters, to them much of it may seem petty but not to the average citizen.

The second is by David Remnick: it's the lead essay in this week's New Yorker Talk of the Town:

Remnick begins with the possibility of a woman president for the first time in US history, but soon moves to the obstacles, among which Donald Trump as the presumptive Republican nominee takes central stage. I call attention especially to these two comments:

He advises her on the stage to maintain "unassailable poise" in stance. That's hard.  He worries:

If her concentration slips, if she falters in the debates or is upended by some ethical failing, if some event (a terrorist act, for instance) takes place that allows Trump to twist its meaning and rally voters to his banner of America First—if any of that happens, not only could the prospect of a female President remain a fantasy but power will be in the hands of a malevolent fraud. And then what? A disaster beyond the imagining of any screenwriter

*******************
My own thoughts:  The one with Reilly, a younger reporter from USA today was telling. The young guy tried to get the information out and he was too afraid to speak up and speak back and soon it seemed that one dishwasher didn't get paid in 2008 .Trump said he expected better from a USA today reporter. They are so scared of him and he will say anything and loudly .

It's to be expected that Trump rallies would begin to call Hillary Clnton the "b" word, so I close this over-linked omnibus blog by simply saying I've read about three essays this morning in mainstream publications over the past couple of weeks (one I link in is Joan Walsh in Nation) about how the majority of women recognize in Trump an abuser of women, rank misogynist (whose ratings have led Fox to force Megyn Kelly or give up her job to kowtow to Trump, and MSNBC to take a swerve to the right).  His brand of misogyny comes out in a particular poisonous way. For example, the twisting of Mrs Clinton's husband's sexual misbehavior into a stream of hatred aimed at her

Related in reality senseless violence wreaked on women:  On the day of the Orlando massacre a man stepped up to a known female singer and just shot her dead; the murder (all these deaths this week -- and those from US drones are included are tragic) death of a genuinely liberal Labor leader: first the man came up and tried to beat her and then he shot her dead. Jo Cox, destroyed by senseless violence. Emily Ashton and Siraj Datoo: A woman who believed in a better world and really fought for it (from BuzzFeed) 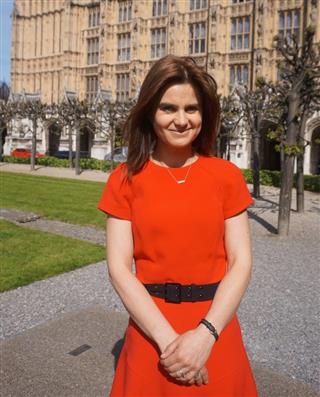