From my patch of ground in the world on the east coast mid-Atlantic state (US)::  I'm a little late on this because I'm only a British subject (when I married Jim I got a card saying I was), so never could vote, and haven't lived there since 1971, but could work, live, use everything about me like everyone else, with all rights; I've visited, spent my life reading British literature and spreading it.  Anglophilic.  So I register a vote here: remain.  I celebrated Scotland remained ("No, thank you") immediately after the election was over (by way of a blog too). 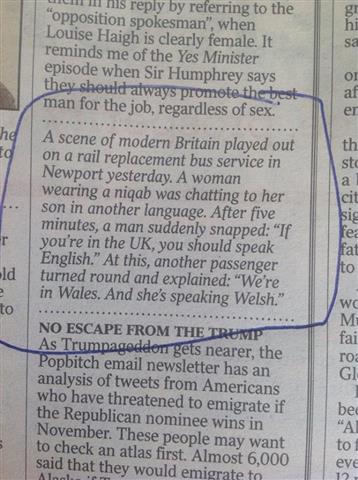 The last few days have persuaded me. It was a series of articles in the LRB articles that clinched it and who is on the side of leave and who remain: 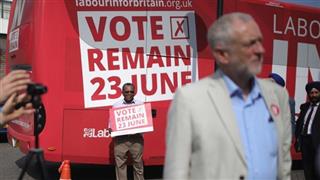 So in my usual way a series of informative, insightful essays:

James Meek: how to grow a weetabix: did you know a huge percentage of English farms are still local, and because of the EU rules animals treated infinitely better across Europe (the US is unspeakable in this regard)

Peter Pomerantsev: European Schools: only recently has someone addressed him as an Englishman

Francis Fitzgibbon: If we leave

From TLS this week: 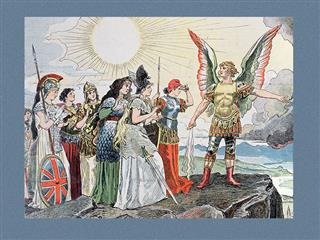 The red bus with the claim that Britain is giving Europe 350 million pounds a day is a lie:

A majority of lemmings in favor of jumping off cliff

Then update on Friday, 6/24/2016: Brexit wins. Before we lambast the working class and poorer and rural people, listen to Naked Capitailsm on why the British went Brexit 52 to 48:

"Brexit represents something much bigger than an economic or political crisis. Although UKIP played shamelessly on the anti-immigration fears, many of the Leave campaigners argued for national sovereignity and self-determination. And the Northern areas that came in strongly for Leave have been left behind as London and environs prospered. It is simplistic, although it will nevertheless be a popular stance among the elites, to depict the Leave vote as yet another proof that technocrats should be in charge. In fact, the very reason that so many UK citizens rejected the dire warnings of what was in store for them if they dared press the red Leave button was that those experts devised and implemented the neoliberal policies that have increased inequality, reduced their economic stability and accelerated political and social change.

Brexit is a crippling blow to the neoliberal order of unfettered trade and capital flows, and citizens being reduced to being consumers who have to fend for themselves in markets, and worse, increasingly isolated worker who are at the mercy of capitalists who are ever more determined to reduce labor costs and hoard the benefits of productivity gains for themselves. Whether they recognize it or not, and we’ll find out over the coming months and years how well different Leave voters saw the choice they made, they have chosen a lower standard of living as a price worth paying for a hope of more control over their destinies. Sadly, these voters are likely to realize the first part of that equation rather than the second."

But see Left Unity which deplores the vote: a disastrous outcome. The neoliberal policies of the EU are not going away; they will now be adminstered even more fiercely by local elite.

And this analysis of the Brexit vote is worth reading.

"Great Britain’s citizens haven’t been losing control over their fate to the EU. They’ve been losing it because their own country’s leaders – as well as those of most other Western democracies – are increasingly in thrall to corporate and financial interests."