Brexit: showing that 52% of British people had reason on their side 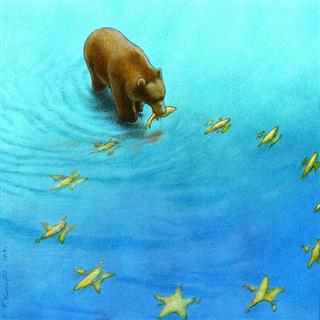 "Great Britain’s citizens haven’t been losing control over their fate to the EU. They’ve been losing it because their own country’s leaders – as well as those of most other Western democracies – are increasingly in thrall to corporate and financial interests." -- The Progressive

Although I would have voted for remain, I'm very bothered at how those who voted for leave are being misrepresented in the press and online.  My morning newspaper today, The Washington Post followed what I have now heard on PBS reports and see the recent cover of the New Yoker has endorsed: we see elegantly dressed British businessman with their briefcases each jumping off a cliff.  In the mainstream press, on US TV, and many many blogs, there are but two kinds of British voters who voted to leave the EU. In the mainstream press and blogs on-line the vote to leave is described as of two types: the bigoted, intolerant, wrongly fearful of “the other” or immigrants and libertarians (the reductive joke is they are against stop signs).

Read the history of the EU in Salon first. The EU has moved from its roots in post-WW2 unity to becoming a neoliberal technocracy.

The third point of view is that the “austerity” policies inflicted (the right word) on the people of Europe on behalf of the investment class is what’s responsible for increasing immiseration among a majority of people, and especially in countries like Greece and Spain. Denmark has never been part of the EU; they have their own currency. The Greeks were afraid to Grexit because they now have Euros and their money would become instantly worthless. Arguably had they been wise or strong enough to keep their own currency, they would have voted to get out of this institution punitive on the vast majority of people in southern Europe and working class, rural, and people in older local kinds of jobs elsewhere.  Arguably the Greeks would have been better off if they could have made such a deal; but the EU masters insisted on conditions that would not give them a chance to rebuild their economy.  They must bend to the vulture hedge fund people (and the coup in Brazil is now foisting this on the Brazilian people). It should be recalled that Denmark has never been part of the EU; they kept their own currency and they have set up a deal where in accordance with pre-existing parameters, they go for individual negotiations with the EU. There are many subject populations (in effect) who, if you held a referendum would vote to leave and it's not because all these human beings are stupid racists: 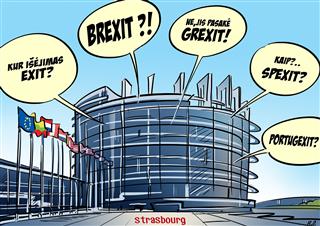 UKIP and the tinier Farage parties have 1% of the vote as of the last election and one MP; there is no equivalent of tea party in the UK as in the US, though there is outright Nazism in these small groups. A vote for Brexit is by no means the same thing as a vote for Trump. The analogy is false.

52% of British people voted to get out. I know a majority in Scotland and Northern Ireland voted to remain; but there were pockets of people in both places who voted to leave, so it was not just English people in the south, London, west country, and the Welsh. I realize a justifiable fear is the next step will be an unravelling of the UK. 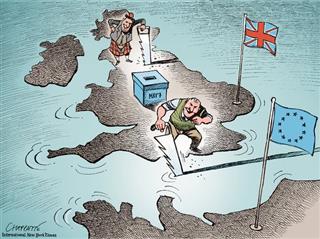 It's not clear what will happen in Scotland now.  They do have different interests than England; but they would not want to give up their pound or sovereignty once they get it.  The Remain versus Leave division was a class division.  Upper class university educated young and old people voted to remain; the old working class labor people to get out. Corbyn knew this and that's why he ran a weak campaign.

Here are three cogent arguments for Brexit: the first from a person who used to write from the Guardian (a newspaper now banned by Trump from his forums). the left-liberal and left-radical point of view the comment above comes out of too*

Paul Mason interviewed (he used to be a British TV journalist too, wrote for the Guardian, a newspaper which Trump has now banned from all his forums)

A blog that my husband used to read daily was not shocked at all:

It’s not just a vote of intolerant bigoted people, or people who love jumping off cliffs, and in a way it should not be a shock — though I was shocked and my first blog was for Remain, for safety. The LRB was clever in having an article which showed that local farms were helped by EU regulations, which also protects animals from the worst ravages and torturing cruel conditions inflicted on them by American capitalist farms. So here is a thorough going-frank Intercept which takes what happened into account:

I'm coming to the view that the British people have done a wake-up call to other peoples in other countries. The PM of Greece gave an interview yesterday where he alone approved of the British vote: it gave people a chance to opt out of this neoliberal investor-controlled world,  As I recall the Greek people  were too afraid because their currency is so linked to the EU; so they opted to stay but not to pay; they ended up staying and have been harshly punished to pay the investor class. The British having a stronger economy on their own and having their own currency spoke loud and clear against this new world order. The politicians are the creatures of this new world order: either paid by them and rich therefore (Hillary Clinton) or one of them (Cameron as revealed by the latest Panama papers, Trump a crook hanger-on). This morning the rightist-labor types (Blairites) of the labor party have done a vote of no confidence to get rid of Jeremy Corbyn; he is refusing to resign as it would be a betrayal of the vote of the majority of Labor voters. There may be a new election there. The Labor officials want a new neoliberal like Blair to run their party.

Bernie Sanders said we need a revolution. He didn't want to scare those who are comfortable enough and didn't give details: but he did want to return to Keynesian economics. No one speaks of this: high taxes on the wealthy and corporations, programs for jobs, social services, education, health, in the US the infrastructure (which is crumbling as in DC the Metro). The 1% and the 10% who directly work for and with them will not give up a dime; they want in fact to take back more of the little that was re-distributed and shared in the middle 20th century. Hillary Clinton's new platform makes no mention of a single payer-system for health care; does not appear to know that the Palestinians exist (a hard-line pro-the present Israeli gov't), is again for what's called "free trade." I deplore the barbaric terrorists in the middle east and other countries the US (and UK, though Cameron held back, not because of his conscience) as much as anyone, but I know they behave the way they do as they have been savagely deprived of any means of even nearly a decent life.

The recent LeCarre films, Our Kind of Traitor may be read as for Brexit. I saw it this past Sunday; I want to see it a second time and read more about the book and then will be writing a blog on it (soon).

It's getting negative reviews because like his A Most Wanted Man (the last film Philip Seymour Hoffman made) it's not understood.

Remember the first thing the leaders of the EU said in response to the Brexit vote was "our first concern is for our investors," and this morning they are looking to make the conditions on the British exist as harsh as possible so as to scare other countries into staying. Would Europe move gradually into another war if there were no EU? How frightened should be be of ourselves? Britain has the fifth strongest economy in the world; they may weather this just fine.

I suspect what will happen is the party elite of both sides of the Parliament house will try to exit as little as possible. No one even mentiones Keynesian economics; before supply-side and monertarism in the 1940s to later 60s there was Keynesian economics: you tax the wealthy, corporations, and unearned income, and you set up programs for jobs, social services, infrastructure, public schools, health care and gradually a majority of people do thrive.