What goes unreported ,,, A mass prayer meeting on a super-hot day with a broken Metro system

This is my response to the Republican convention and nomination for president of Trump, a dangerous, fraudulent man. 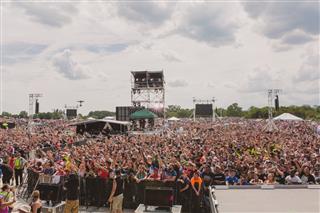 How many people know that on Saturday, July 16th beyond the half a million that I was told were showing up that there was mass prayer meeting on the Washington D.C. National Mall? It was not reported in the Washington Post (said to be telling news of the region); I saw it on-line nowhere else. You can find flash-y videos about "Jesus" under "Reset 2016;" you are told you will be able to get rid of your depression; and there are sites describing a full day's events in brief. None of these will appear on your computer until you know the phrase "Reset 2016" which I saw on hundreds of T-shirts in and around the Metro this past Saturday.

One group of people who knew by 9:30 included those who run the Metro. I saw both times I was on the Metro extra trains put on the tracks, labelled "special" where people on them and a voice-over told passengers "this is a blue" or "yellow" or other train headed for say "Huntington" or some other final destination. Without these continuing extra trains, downstairs on the Metro could have gotten dangerous. As it was people collapsed from heat prostration on one of the escalators at the two Smithsonian stations, putting that side of entry out of bounds, and causing a huge slow-moving crowd to form on Independence Avenue. 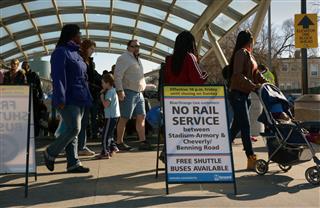 another part of the Metro from the one I tak where people have to get off, take a shuttle bus and then get back on

At 8:30 am I was on my way to an all day seminar on the Beatles and anticipated delays because I would have to get off the train one stop beyond where I get on (King Street), take a shuttle bus for over 20 minutes, and then get back on the train and find my circuitous way to the Smithsonian stop. But when I got onto the station I was startled to see enormous crowds, people in different groups of colored T-Shirts. All white, many of them having traveled a considerable distance from another state to come here. I asked one woman what this was about and recognized a tone I had heard from students in my last years of teaching.

She said they were "Christians," as if the word were a strange one, the name of a beleaguered sect. I never responded to students who talked this way, "Don't you know Christianity is the religion of a majority of the people in the US?" because I thought it useless. Maybe I should start, but I did not on Saturday. Someone told me they were there to pray for the US and to show what a great and good and beautiful nation we are. It was to go on until 9 in the night. I said in reply, "It's very hot out there."

A woman who began to talk more to me said they had water bottles. We were amid this group of people in the same colored T-shirt, and it was apparent to me, the purpose of her group was to feel good about themselves and the world. They were asserting that any fault or evil was that of someone else than they; they were appealing to God to save the world and themselves. I asked her if she was for a ban on assault weapons and she fell silent. Silent. She asked me, "Are you going?" I said I was going to the Smithsonian, a day on the Beatles music group and music, and some talk ensued which led me to reply "I don't believe in God, don't believe any such supernatural being exists." She smiled that self-satisfied smile I've seen many times before, and began to argue the question, and was astonished (really) at my saying, "None of this exists." Did I not feel a comforting presence or want one when I got up. I said "No." She then fell silent.

Suffice to say I got on my train, went upstairs to take a slow bus to a stop near DC (Pentagon City) and then a yellow train to L'Enfant Plaza, and then a silver to Smithsonian. It was 5 to 10. I was 15 minutes late.

[See my blog on The Beatles: an extraordinary creation/production of transformative music.]

When I came out of the Smithsonian 6 and 1/5 hours or so later, it was about 20 to 5. As I neared the Metro stations I saw the same crowds, the blocked station (escalator out of bounds as one person had collapsed on it), and I (as one person not in a group) managed to dart and move through the crowd to near the escalator and a stairway. I walked down the steep stairways with hundreds of people all in these T-Shirts "Reset 2016."  Now I noticed sayings from the Bible on these.

I had some trouble identifying which train to take and took one in the wrong direction; when I saw I had done that, I got out and retrieved my position, now waiting on the right side for the right train, which took me to L'Enfant Plaza, and from there I went downstairs to the yellow line to Pentagon City, from which I would eventually be able to take a bus. I look old and probably harmless and found an older woman came up to me to ask me directions. She had on one of these T-Shirts. She told me the mass meeting had ended early because too many people were suffering from the heat, and she was on her way home to Alexandria. It emerged this woman lives about 7 minutes away from me by car.

We got into the right train and someone gave up to me a seat reserved for "senior citizens."  (Sometimes I wonder if I look really bad.) For a while no one sat next to me, and then this same woman came over and sat down next to me, much relieved. She was not as old as I but she was clearly sweating, looked weary, and needed to sit. We talked. She lives in a different universe than I do. She said she hardly ever traveled on the Metro. I asked why, and she said, "Isn't it dangerous?" I replied only from the lack of money put into the system which has caused the wires and cable to be rotted and without sufficient protective cover. I said (truly) I had never been in danger from anyone on the Metro. I asked her if she ever went into DC. She said she had no occasion to. This was a rare time for her. I asked her how she had come to know about "Reset 2016." Oh, it had been announced in her church and a group of people from her church had gone. She had been separated from them as they went home by cars. I asked her if she had enjoyed herself. "Oh yes."  I asked her if she thought she had done any good?  She said, "oh yes." My last question was, was she for a ban on assault weapons being sold to civlizians and was glad she said, "yes." immediately. I did not want to risk a larger question, "Was she for gun control?"

From what I saw and heard most of those I saw came from suburbs in states and they were not poor; they were modest home-owners. They carried backpacks and had made their own picnic lunches. They were staying the minimum time in DC and then back to their homes. To me the faces of these people looked curiously blank; perhaps they were inward looks where they showed themselves one another and to the "non-Christian" world maintained a guarded face.

This woman did open her face to me. I asked her "Who was the chief organizer of this mass demonstration?" She seemed puzzled by this question. I repeated it in another form: who paid the money for the people on the mall to have the stands and the equipment they were using to broadcast prayers? (plain words to this effect). She said she didn't know. "Who were the chief speakers?" She said she wasn't sure of their names. I told her I had never heard of this mass demonstration (as I called it, she did not) before I got onto the Metro at 8:30 am. She smiled a smile like the first woman I spoke to then: "yes, the newspapers never report what Christians do," she said. A glint of anger and resentment. I said it was true that newspapers only reported events they thought set up by respectable, important (these need not be respectable) or controlling institutions (to me the NRA, the reactionary rightest groups run by people like the Koch brothers), or if it was sensational.  Rolling Thunder, the annual Vietnam veteran meeting had only begun to be reported a few years ago. I reiterated my question: "I'd like to know who funded this or started it because then we could figure out why it's not reported." She didn't enter into this thought.

I asked her if she read the newspapers or the Internet much? "No." She said something which implied "Newspapers are full of lies." "What news show does she watch" (my question or words to this effect). She said without embarrassment, "Fox news," then, "sometimes CNN." 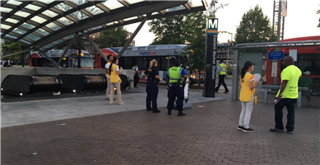 A bus station in early morning near a Virginia Metro stop

It was soon time for both of us to get off to take the shuttle bus.  A ride, 25 minutes. Then we got back on the train, and sat next to one another again. I in the seniors section and she too. (She was cheating.)  By that time I realized she had one phrase in mind she kept repeating: "The No 7 going to Fairlington." That was the bus she needed to take when we arrived at King Street. She seemed worried and I assured her the bus would be there. She did ask me if I had a car. I said, yes, and I had parked it near the King Street station where 3 hour parking is allowed. It was a 2-3 minute walk and there my car would be. I remind my reader she was about to take a second bus. So I was a privileged person as I had a car to take when I got off; she had to take another bus.

Quite a trip she had taken to get to this national meeting which ended early lest people like her collapse.

These are deluded people if their purpose was to stop the killing in the streets of the US, or the killing of people and destruction and immiseration of groups of people in the Middle East in order for the capitalist order to keep making huge sums on extracing oil, selling weapons, providing an egregiously luxurious lifestyle for the 1% of this earth. I must say their God has at a minimum neglected the Metro, not made sure their tax money is used for their benefit at all. They were stuffed into the extra or special trains put on the system for the day.

I do not know that many of them will vote for Trump; it's startling to think they may as this man is utterly amoral, has lived an utterly areligious life, but they are hardly Hillary Clinton people. I tell this story in order to bring into public discourse on the Internet in my tiny corner of it, to remind readers of the existence of such people. I fear these people will vote for Trump.

This is my contribution or reaction to the Republican National Convention. An event I witnessed from far, wholly unreported in mainstream media.

Miss Drake who boldly goes where no woman before her has gone ...