Thoughts on the debasement of Yahoo services: what Trump will mean for the Internet

"They are surely happy," said the prince, "who have all these

conveniencies, of which I envy none so much as the facility with

which separated friends interchange their thoughts."

Dear Internet, FB, and all sorts of friends,

Think about all the fun we have with our cats ... 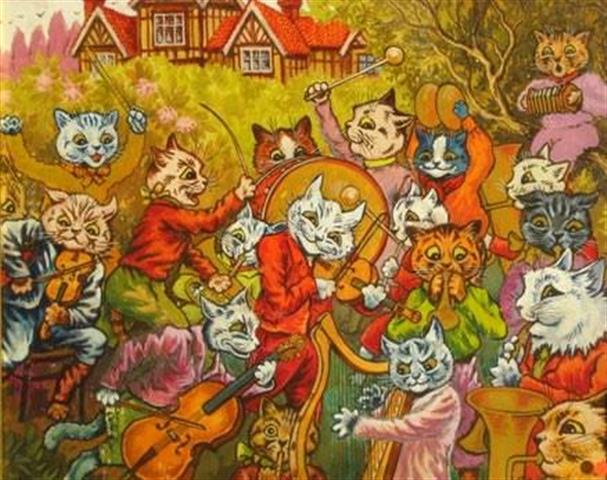 A few thoughts on the further debasement of Yahoo services:

As a long time user of Yahoo, nowadays a listmoderator for one active list, Trollope19thCStudies, and one where there are still a few friends who try to find time to read together and post, I'd like to suggest what the latest debasement of Yahoo portends about a Trump presidency.

On both the listservs,Janeites and Inimitable-Boz (which I still post from time to time) and on hundreds of other listservs as of last Wednesday messages are coming in very s-l-o-w-l-y. It can take anywhere from 12 to 48 hours; sometimes they don't show at all. Iindividuals are suddenly having problems staying on Yahoo without resigning up, giving information about oneself (phone numbers for example). On the two sites on facebook supposedly for Yahoo customer care, I've seen hundreds of complaints; on three Yahoo listmanagers listservs the same. On neither is there any direct help or acknowledgement any one read a complaint who could do something about it. This morning for the first time Yahoo put a place for "tickets" to send to them to explain any problems. But I have managed to talk to two Yahoo people on two of the above sites and gotten obfuscating unhelpful replies.

What happened? Verizon has bought Yahoo. Now Verizon has been working elsewhere and in courts to privatize Internet routes so they can have slow and fast lanes. They may have instituted slow lanes for ordinary yahoo users. Early on I liked Yahoo; it had flaws but it did what it said it would: platform for talk, files, albums, archives, places to get help. When they switched to "Neo" then the debasement began. I have made two face book pages for the two listservs that are still alive but I'm not sure how many will come over and also the whole feel of face-book is so different.
As long as Obama is president and his appointees at the FCC and the supreme court divided, the Internet will be classified as a public utility. That is enormously important. Calling it a public utility makes enormous sense for all the people literally around the world using it. I follow future learn courses and it's remarkable how many ways this communication tool is essential for so many. And so many are so poor.

If Trump should win, all this will change. He will appoint millionaires, CEOs, and ruthless pro-industry and corporate people to the FCC and positions of power for communication and public transportation (a wolf watching the chicken coop). Private companies will go after ISPs to close down anything that might interfere with profits. It will mean the end of the Internet as we have known it for these short 20 years or so (PCs spread to ordinary people in 1995). We will all be turned back to isolation. Right now private emails are monitored. Trumps says he will "open up" the libel lies: appoint judges who will work to silence newspapers, silence TV news, silence ordinary critizens by litigation that breaks them financially. Face-book would feel the heat too if Trumpish came into powerful offices.. 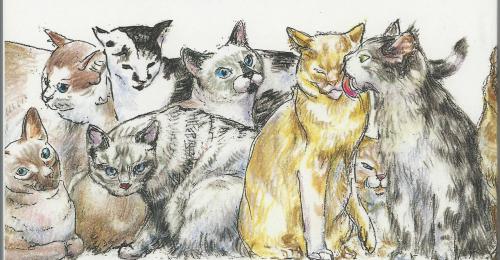 Liebling said freedom of the press belongs to the person who owns one. Those of us who have been publishing essays, fictions, scholarship, who have been reading other people's essays on what they read, their life-writing, made friends will again find ourselves excluded and disabled. I have now participated in or "taken," "followed" three Future Learn courses from Open University in the UK: they are for. The Anthropology of Social Media; The Power of Social Media; a course in how to read and analyse common usages of word, symbols and behavior on the Net:  all three showed how pervasive the Internet is, how so many people use it daily to contact friends, business associates, do common needed tasks about essentials; also (this counts) a place to get good information, find emotional support, express ourselves, share views. All this will be badly maimed; it might become as limited as it is in China or Russia. Why do we post? we post to live better, more safely, more in a community.

Yes Hillary Clinton might collude with the corporations. She likes private-public partnerships. Such things exclude individual people, but I think her solution will resemble Obama's as he likes private-public partnerships too. She is an organization woman, someone who shares, cooperates, respects the rights of others so I imagine if in her administration there is some pull back from insisting the Internet is a utility and Net neutrality (everyone having access to the same cables at the same speed), it will be contained. More pay walls will probably be the result of pressure on her. I doubt she'd change on copyright issues: these are local problems. She is on record for fostering communications; it's her basic style.  Remember the churchlady who was so active in your community when you were young (read the Garrison Keillor column linked in). Or the woman who headed the Parents-Teachers Association. That's her.

Trump would just wipe us away: he regards all criticism of him as vicious attacks and seeks to retaliate and punish. Remember how he said spontaneously oh yes women getting an abortion without telling the husband should obviously be punished. He would want control and profits for himself and his buddies.

So if you are hesitating over Hillary, remember the Internet as you type out your hesitation to your friend, on a blog, website, twitter or face-book. 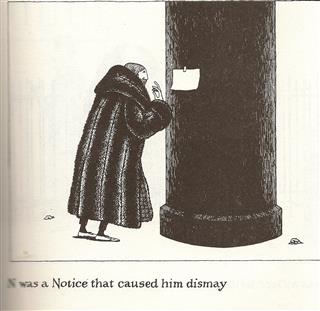 Edward Gorey -- large areas of the Internet possibly after Trump