Another photo of Hillary Clinton; another suggestion by Trump to incite violence against her

I like the photos of Hillary where she is not artificially smiling. But that's not why I am adding this photo of her onto the others I've put on this blog. I'm told the woman is now wearing full body armor and that is why she became dehydrated.  Look at her body in that outfit. She does look very stiff. 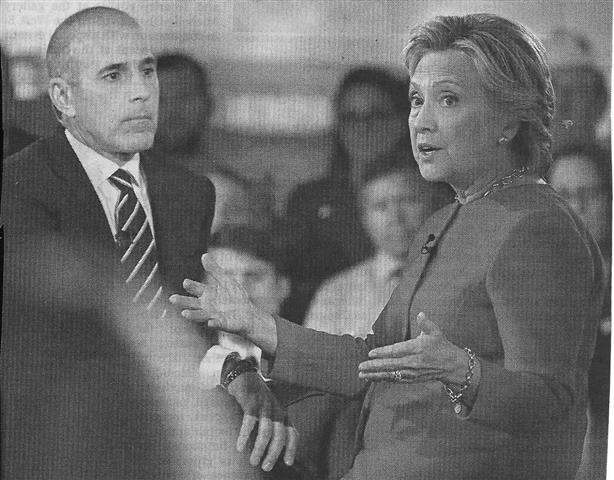 A few weeks ago a an August rally in North Carolina, Trump suggested that armed citizens could stop a hypothetical president Clinton from putting justices who favor gun control on the Supreme Court.

said that 's "bodyguards" should disarm themselves because Clinton supports gun control during a rally in Miami on Friday. He has made similar remarks in the past, but this time took it a little further.

Why does no one arrest Trump for inciting violence against Hillary Clinton?No republican even condemns these threats, they do not mention them. Imagine what the woman feels when she puts on this body armor. He is torturing her.

The analogy is that of a man who threatens his ex-wife or girl friend, who throws out half-threats. The police cannot arrest him for words; he must act on it. Trump is abusing her the way men have abused women since women were able theoretically to get police protection. Does no one care? that he knows intuitively how to abuse a woman and not bring police down on him.

This is so horrible -- it's beyond minimal decency; it's unsafe for her. But he's not her husband; she is an important person now and in wide public life. What are the authorities afraid of? Is it really they are afraid of the type of white male who took over the Oregon center some months ago -- the militia let them stay there for months, and one white man only was killed. Had that been black people, Indians, the compound would have been attacked almost immediately.