A letter of complaint to PBS reports: they have been helping to elect Donald Trump

Friends, for the first time ever I have written a letter of complaint to a news organization about their reporting. As I wrote this I realized what I am complaining about has been happening in other newspapers:  sometimes the venerable NYTimes, sometimes even the Washington Post which has done its daily duty more explicitly. 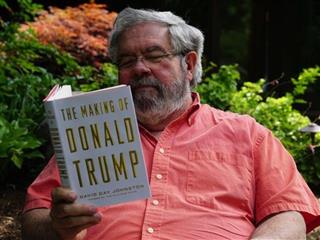 I wrote to Mark Gertler who is the person one sends these emails to, something like this:

Dear Sir, There is a difference between even-handedness and bending over backwards to the point you support a candidate by not telling the truth.  The other night Paul Solman had on the broadcast for the first time a man who has written a thoroughly-research book on Trump, showing among other things his long history of fraud, of lying, and now he recently wrote an article about what we know about this man's taxes. Solman treated him hostilely. In effect Solman defended cheating on taxes. He defended behavior that was indictable. The interviewee said that there is a difference between shady practices by someone who is not running for president and someone who is. Solman looked unimpressed.

I've listened over the months to Shields and especially Shields, attack Clinton for what are in comparison personality issues and political maneuvring well within the norms of politics. Brooke has made it plain he is "never Trump," but to listen to him on some weeks he regards her remiss behavior as the equivalent of Trump's.  Endless complaints about her and then they turn round to excuse and "understand" him. Only in the last two weeks has Shields come out and treated Trump with the seriousness a presidential candidate ought to be and thoroughly described what he is.

Judy Woodruff will sit and try to excuse the delusional voting of the Trump people, never once pointing out the difference between what is and what these people imagine. Never have I seen her come near the issue of misogyny.  Shame on her as a woman. I suppose I ought to make a blog too about the difference between even-handedness and bending over backwards to support a crook.  They are helping to elect this man.

Gwen Ifill. Does she care more about her career lest the least fair comment about black women -- often the mothers, sisters, daughters of the black men regularly killed in the streets hurt her chance at whatever. I wonder if Charlene Hunter-Gault was hired to say in her suave tactful way as if meditating what Ifill demurs at. Ifill does regularly interview African-American people.

I have been a sustaining member of PBS for over a year. I did this because I support PBS reports. Equally that night Paul Solman disgraced himself Malcolm Brabant had a news report on trafficking of refugee women. I've no doubt he sometimes risks his life informing us about the plight of these people. Fred de Sam Lazaro is irreplaceable, a hero. William Brangham is so penetrating in what he does present.  I enjoy Jeffrey Brown's purview and interviews.

I have the highest respect for Hari Sreenivasan. Has he at any point reported on the effect of Trump's anti-immigrant stance? precisely because he is a man whose background is not European he should be forthright.

When it comes to Trump this news organization loses sight of their duty as news people to report straight what is.
I signed my name.

i did not say that Trump has not deigned to appear on their show. He has treated them with utter contempt, pretending they are not there even. What do they expect will happen if he should become president? When someone pisses in your face, do you say it's raining?

The man Solman interviewed is a a Pulitzer-Prize winning investigative journalist, David Cay Johnston, who’s been reporting on Trump since the late ’80s. He’s also the author of a bestselling book, The Making of Donald Trump.