"It's" certainly not over.

Keep in mind that Hillary Clinton did take a majority of the actual votes 54% -- in the wrong places, where they did her not enough good as the US is so gerrymandered and the electoral college a left-over from a racist colonialist republic. Yes the electoral college stands for the continued refusal of the US as a gov't and country really to have a one-person one vote system.

She is a good, gracious, intelligent, well-meaning, experienced statesman, and Kaine is a kind and generous spirited man. A sizable proportion of the US population accounts these qualities unimportant. If you think as I do that Bush was total disaster (it began with his war on Iraq and his putting down the percentage of taxes on the rich), you ain't seen nuthin' yet when it comes to Trump and a Republican dominated congress.

What follows is an elaboration of the above.

We have been, on my small Trollope and his contemporaries reading list on Yahoo, reading Tolstoy's enormous War and Peace, and we are now into this huge conflagration (for its time) that the book has been moving towards: the war of 1812, and specifically the battle of Borodino. Tolstoy keeps asking and offering explanations for why thousands and thousands of men killed one another, forced horrific deaths on one another, destroyed everything in sight as they marched through, food supplies, houses insofar as they could bother. All to no point. To obey one man?  Napoleon. Tolstoy does not believe this. 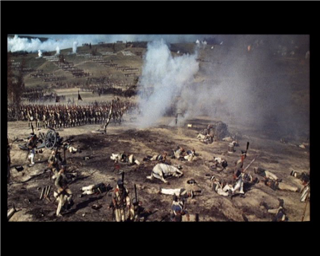 From Bondarchuk's 1966 film adaptation of War and Peace: the 1812 battlefield (a still)
What to me is important to say about this novel this morning is that we are not surprised by this turn of ev ents in the book. First of all it literally happened, even if many of the specific characters are fictional, and some of the doings of the historical characters fictionalized. Second we say it's utterly believable, probable, consistent with what we all know of human nature that the situation of Czarist Russia and the peoples and armies of its allies, and the people and armies of the country they all first attacked (huge numbers of people under the leadership of not a few) should evolve in just this way.

The polls put me in mind of an incident years ago. A black man ran for Mayor in LA (was it?). A huge majority of those polled showed he was going to win. He lost badly. Conclusion: those asked lied. Polls are like sex surveys -- where most people lie, and are presenting an image of themselves they want the pollster to take away.  We might bring the two polling topics together:  A man who boasts of sexual assault, who when accused of rape replies, look at her, implying no one (man) could possibly want her (sexually) has won the US election.

I thought about the Renaissance playwright Christopher Marlowe's ironic comment in his fiercely anti-semitic play on Barabas:  how Barabas goes about "kicking cripples under wells" and poisoning wells." The last day of the campaign Trump had a man with cerebral palsy physically kicked out of his rally for peaceful protest with a sign.  He then mocked him, and when President Obama in public respected the man's purpose and commiserated with him over his treatment, Trump mocked that. Trump says there is no such thing as global warming and I've not doubt his FBI will ruthlessly do all it can to facilitate the fossil fuel industries fracking wherever they please.

Here is the man's plan rightly described by John Nichols:  a plan to inflict gradual and immediate pain and immiseration on 98% of the US population

The house and senate are now majority republican: they will destroy social security insofar as they can, privatize it so that if you are grandfathered in (as I will be) it will hurt; they have been trying to destroy medicate for years; now they'll do that. Medicare is a kind of National Health for people over 65. It's called a "single payer" system (i.e.,g the gov't through taxes) over here. So that's for them. The republicans will now carry on privatizing schools, no money for public transport (which enables people to get together), they will give fossil fuels a free hand (fracking), carry on mass incarceration, murdering blacks. It's a 40 year set-back for women: a bimbo (sorry for the term) in the white house. The man is gloating tonight as he contemplates how rich he'll leave. He has wanted to repress the press, he mocks and throws out disabled people (he does not understand peaceful protest). He represents the worst in human nature - and he can start nuclear war without consultation: only the army can stop him if they disobey. I omit these horrific continual wars -- drones dropped, hospitals destroyed, barrel bombs (Obama participated in this and Clinton would not reject it -- Sanders did make noises to suggest he might).

We didn't get in our newspapers that he would win -- the newspapers dislike him for good reason and the elite of the wealthy are also very nervous; they preferred Hillary. Why first names? "The Donald" they called it; from TV he got billions of dollars of free publicity because his presence and pictures put up ratings. They helped elect the man who would destroy and repress them. I fear for the Internet for the average person as a place to communicate and find out news and views.

It's continually asserted part of his constituency were the ground down and ignored, and that's true but it was also intense bigotry, and a whole range of US values that are terrible -- for guns, racist, sexist. Lots of middle range white people voted for him. My IT guy who makes 6 figures loves him, inoculated against all criticism. he'd get a gleam in his eye when you said "make America great again." He looks forward to bullying the rest of the world with impunity.  As usual the very people voting for this man (this is true of all republican wins) are those Trump and the republicans will hurt worse. Of course he cannot restart factories; his constituency includes the corporate globalizers.


While in Cornwall I did hear and listen to ordinary British people around me and came to the conclusion the Brexit vote was not a no to neoliberalism but the product of fear and dislike of immigrants. At least that was the way I heard it talked about: in terms of other countries stealing and undermining English jobs and industries.  I heard people talk in a way that suggested they didn't identify with Scots people. I heard someone defend the attacks on Polish people the couple of days after the Brexit vote.  The neoliberal policies of the EU are bad too and as in the US this is part of why a majority voted to leave Europe.

There is no excuse for this choice in the sense that the condition of the average person in the US is the result of similar choices for public officials for decades. Each time starting in the later 1940s the US population was given a choice they regularly chose people who fleeced them and enriched themselves and few groups in society, and went to war to do it, killing, maiming, destroying other people's social revolutions around the world. The average person's immiseration today comes from decades of the same kind of choice they made yesterday. From the formation of a strongly conservative set of courts, privatized prison system, loss of public lawyers and use of plea bargaining with huge sentences as the threat so the person doesn't go to court but to jail for a shorter time (not short).   So now a near majority of US people chose a crook, ignorant, serial liar, rapist, racist who has promised to extend torture, willingness to use nuclear weapons, no sense of anything but narrow national interest as if all peoples are not in the world together, and a TV right-wing radio host with extreme religious views (he is for inflicting conversion therapy on GLBT people) and ceaselessly anti-labor.

It is an even worse nightmare than the elections of Nixon, Reagan, Bush senior (Reagan 2) and Bush junior. None of them openly professed to ignore law and the constitution. The last day of his campaign Trump had kicked out of a rally physically a man with cerebral palsy who was peacefully protesting with a sign. He then mocked the man. He then mocked Obama for publiclly supporting this man's right to protest the derision he aims at the disabled. The man showed real courage to go to such a rally and act on his own behalf and those of his fellow Americans.