This will be my last blog on the election itself and my last photo of Hillary Clinton. 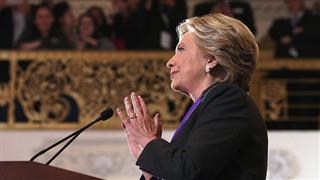 Waking this morning and again not sleeping until dawn, it came to me not only were the newspapers clueless about the election, they had the wrong party: it was said the Republican party was self-destructing; it appears it's the democratic party which is self-destructed -- the democrats have lost congress, many judges and more to come, many governorships, and then state legislatures. They refuse to offer an alternative vision: Obama sent drones; Trump says he will carpet bomb (kill thousands instead of say 23 at a time). Roosevelt did in 1932 with his New Deal. Now what's left will be destroyed, defunded totally or whatever they have to do.. Yesterday was a case in point: Obama at no point recognized that our democracy includes the right of people to be out there and protest peacefully, only emitting sterm scolding pious precepts about peaceful transitions.  Police were out in the streets, in some cases arresting people. On North Dakota early last week Obama talked as if both sides were equal and had not come to the point of moving that pipeline. Now of course the people's water supply will be very threatened, probably compromised. Democrats offered Republican-policies with amelioration or "lite."

The analogy with the Brits is correct: labor is dying because its leaders will not answer the constituency who clearly want Jeremy Corbyn, but the leaders will not work with a true socialist or old labor type -- it's not old, it's what's wanted. The Democratic party sidelined a man who did in numbers show a good chance to beat Trump: Sanders. There is this poll tonight; I admit it's a counterfactual.  They persisted in insisting on Hillary Clinton who came with much baggage, is weak as a campaigner, does not know how to emotionally connect. They would not give Sanders a chance. Now they are in deeper disarray from which they may not be able to come back as the republicans when they get into power change the rules to keep them out -- as in North Carolina. Harry Reid and Bernie Sanders gave responses which took into account what Trump is prepared to do and how they will vigorously fight

Tonight on PBS both Brooke and Shields refused to recognize reality -- as the pollsters failed to get any grasp on what was happening during the campaign between Trump and Clinton. Brooke went on about how the voters were marginalized, left out people. Some were, but many were not: wealthy, middle class went for Trump. What united them were they were all or almost all white. Shields waxed indignant at those who say racism is central: he wants to know how "we" can work with these people if we demonize them.  Trump supporters demonize swatches of democratic voters. They will not work with you on a "nice" basis at all. PBS is determined to keep to a script which is falsifying in order to normalize the reasons for Trump's election. He has never deigned to be on their show.  He has treated them with utter contempt and they parade his program as if it were reasonable and potentially good.  Moore doesn't, he persists in the fantasy it's about being left out, impoverished

Not one comment on how the Democratic party is dissolving away because its leaders refuse to answer to their constituency. They do have to develop a new party. Trump lost the popular vote but won the electoral college; of course this antiquated patronage system should long ago have been abolished, but it favors the rural areas, hierarchy. But do the democrats even bring this up? So they campaign for one person one vote?

All that is there for the people are mass demonstrations - and these meet riot police, arrests, and worse: tear gas, rubber bullets, pepper-spray. The democratic party is still refusing to move and will continue to dissolve away. A friend thinks a new party will arise from these ashes -- history says no. Yes a British labor party arose but not from such a conflagration as this. In Europe they were crushed when they tried after 1848.

When I opened my Washington Post today I couldn't forget how all i've read in the past months got it all wrong -- especially on black people. They did not come out in the numbers needed for Hillary -- so Trump got 51% of North Carolina. I've talked about how puzzled I was at the assertion she had the blacks (yes the ones on stage) when he and she began mass incarceration, ended welfare, made it possible for banks to do what they wish to people's hard earned houses. For myself I never for a moment forget she supported ending welfare. It just rankles. I was overlooking it and her record as a military hawk (she never mentions the Palestinians embargoed on their prison strip still) as she has far more on her record that is good and I was voting against Trump. Juan Gonzalez does show that the latinoes came out for Clinton 80-90%

Trump says he will put back torture, protect carrying loaded unconcealed gums, will expand Guantanamo,,is  willing to use nuclear weapons and repress the press --- last night Tump said the protests around the US are incited by the media (Obama as I say refused to recognize them in speech). He has now broken with tradition and is not permitting the press to travel with him.
His supporters were all white and older whites came out heavily for him in the white population in the industrial and ex-industrial states came out for him. It's cruel (Trump was cruelty personified in the way he treated disabled people, racist (why promise to rescind every executive order Obama ever signed? Trump threw black people out of his rallies unceremoniously). .
Today the Ku Klux Clan group in North Caroline has announced a large public rally, celebrating the election of Donald Trump:
http://wgntv.com/2016/11/11/ku-klux-klan-announces-trump-victory-parade-in-north-carolina/

Seeking power first, not cooperation, overtly Christian (which is not the same as morally Christian), isolation or Nativist (but it does not include Native Americans). Stocks of private prisons have risen quickly; also all those industries serving the Pentagon war machine. The prison sentences fit in here. If you see it, everything falls into place.  Even women voting for him, especially a women who worked as a nude model (and the way to get jobs there is through sex): she stands for being successful through making her body beautiful and selling it

On women's rights and needs: Fan-sided reported this morning that Obama put in place an executive order and passed legislation to protect women's health funding at reasonable costs in Planned Parenthood. But the next day (today) women republicans say this is a hideous corrupt abortion provider (as if that is all they do, it's a small part) and we will defund the whole thing -- she pretended to believe fake videos about them selling fetuses. This is the kind of talk we will have here and the kind of actions done. Many women will not have no where to go for ordinary health but to egregiously expensive doctors as the first thing the republicans will do is repeal ACA (affordable care act, called Obama care). The rhetoric which is reported in most places as real or true (Fan-sided managed a sceptical note) is delusional and filled with hatred. Trump's plan for the next 100 days by the way includes his determination to sue the women who accused him of sexual harrasment, groping or rape. Women in my classes said this loss of Clinton, and the election of Trump who openly boasts of sexual assault and whose wife made her living selling her puts women back 40 years.

All the above said, personally  and as a woman, I would have loved to see Hillary Clinton photographed as a fourth woman in charge --- she worked so hard, she has been so brave.
I end on the statements of two women in power in response to the election of Trump

A friend on the Wwtta listserv I moderated put this on: Merkel’s statement upon Trump’s election; here Theresa May’s more sycophantic one: 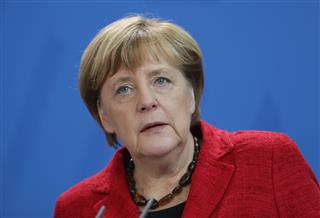 “There’s no country we Germans have as close a relationship with as the United States of America. Whoever rules this vast country, with its enormous economic strength, its military potential, its cultural influence, carries a responsibility which is felt all over the world. Americans have decided that the person to carry this responsibility for the next four years is Donald Trump.Germany and America are connected by common values: democracy, freedom, respect for the law and for human dignity irrespective of origin, skin colour, religion, gender, sexual orientation or political conviction. On the basis of these values, I offer the future president of America, Donald Trump, a close working relationship. Partnership with the USA remains a basic pillar of German foreign policy in order for us to meet the great challenges of our time: striving for economic and social wellbeing and a forward-looking climate policy, the fight against terrorism, hunger and disease, engagement for peace and freedom, in Germany, Europe and all over the world.”

No congratulations and a pretty open hint that there would little or no cooperation if all those civil rights she mentioned should be undermined as we might well expect them to be, judging by Trump’s policy statements during the campaign. 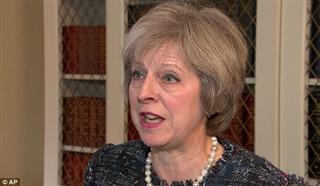 In contrast, Theresa May:

“I would like to congratulate Donald Trump on being elected the next President of the United States, following a hard-fought campaign. Britain and the United States have an enduring and special relationship based on the values of freedom, democracy and enterprise. We are, and we will remain, close partners on trade, security and defence. I look forward to working with President-elect Donald Trump, building on those ties to ensure the security and prosperity of our nations in the years ahead.”

May did give an old-fashioned "protectionist" (paternalistic Toryism returns) speech in Parliament not long ago. This ex-home secretar presents herself as concerned for all the people in the UK, responsible for them (is the way the thought was couched)

Not to omit Nicola Sturgeon, Prime Minister of Scotland: 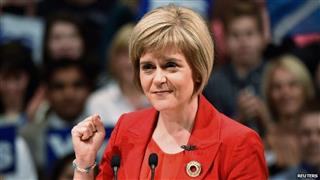