I did go to the first post-election rally of democrats - for social and economic justice, for good healthcare for all, for equality - just outside a Senate building in a pretty park. It was reported in today's later edition of The Guardian.

It was set up and arranged by at least three unions: Nurses (who endorsed Sanders to the end), ATU (American transit union?), CWU (post office and other communication workers); the pretense was they were there to celebrate the TPP dying and they insisted it was not Trump which killed it but this mass movement of several different groups. The inference or argument from this insisted-upon success was: we can fight back, if we stay together we can win other fights

This was the first rally or public meeting of this kind of thing that I participated in since say 1968 -- when I had left in disgust at the frivolity of the people I was surrounded by.  This group were there for serious reasons and the tone of the crowd was serious at the same time amiable to one another.  There were apparently two Trump supporters in the crowd with these hideous signs: Love Trump's Hate (why do they not say hatred).  But people were magnimous to these silent presences. It was not a march, but gathering around a dias in a park next to a senate office building. There were around 9 (!) speakers before Sanders but it seemed to me there would have been no crowd but for the promise of Sanders and his presence heads the stories about this rally. 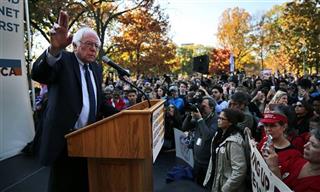 I thought at least 1000 people were there, maybe more. We seemed to fill out the small part.  People from the same union with the same t-shirts or some sign; people with children, all races, all types, old, young. I saw one elderly lady with no teeth (I notice that kind of thing nowadays as I wear almost complete dentures). Some were friendly. Everyone close together, no pushing, a sense of cooperation. They chanted back when they were given words to call. For me the only one moving was "Keep hope alive."

It seemed to me the letters TTP ignited no one, even if it was an important moment in preventing so much momentum in the destruction of unions and good jobs for workers.  Some of these 9 were all congratulating one another -- which while to me in somewhat bad taste was understandable. What makes people work on?  As the speeches and small talk around me went on, a few union people -- men, not the women, made genuine contact with the larger crowd by referring to other issues people cared about. For the first time I witnessed how weak an issue for a group is health care. You might say it's a "down" subject. but the last three men talked about what is happening or about to happen in this Trump administration,  a powerful speaker from the CWU, from the AFL/CIO and from an official of the democratic party -- himself a Muslim immigrant with dark skin. They all said all the gains of the last half century and more were at risk, but persisted in this positive: we can fight and we can win. Sanders told the most truth. He did say the democratic party had picked a candidate who was known to be unpopular and would not budge from that. The party has to change. He talked of despair in the US -- and described conditions of misery and said this is why Trump won but Trump will not deliver to these people at all.

I was bothered because little of what was said came near the unfolding horror of Trump's appointments today. So all this was educational for me. My friend who fears intensely losing the health care she has had since Obamacare was dismayed. She persists in calling the democratic headquarters. I was interviewed by the Guardian reporter who wrote the above story but she didn't report my replies. She asked why I was there: I said to help protect social security, medicare, the internet for all. She asked me how I felt when I got up the morning after the election. I said deep distress. She asked why? because I foresee what shreds of democracy are left will be cast aside. She asked me if I thought Sanders might have won. I said I didn't know but that newspapers had colluded in helping Trump to win and marginalizing Sanders. I said I also feared a nuclear war because if Trump didn't start it, others might pitch a first strike out of nervousness if he bullied them


Read Elizabeth Warren's open letter to Trump on his "transition team." Racist goons (one from the Net, the other with Klan ties, four of his children (!). He is thinking of adding Giuiliani as attorney general -- that is a signal that black lives don't matter. For foreign policy he will follow Putin. He will take the US out of all trade agreements, NATO.  He will not have reporters about him but communicate to the American people through lying tweets.  . He will let Ryan shred all social programs and let Mitchell stack the supreme court with reactionaries. He will let lobbyists loose on all things they can feed off of. Among these a lobbyist for Verizon to take a major position in the FCC. Goodbye Net Neutrality the Net as we have known it as a place for ordinary people to communicate with one another.  Is this enough for them: Are the elected officials in congress and the house going to just sit there and let all this happen

It shows how weak is the US gov't that this could have been done decades ago but that in each case we were dependent on the man taking office doing what had been done and continually consulting with others. It appears to me the whole constitution is a bad document -- or any gov't is dependent on who gets into office. It's like some 18th century monarchy where a particularly evil insane person is put in charge. Maybe the end result after the some conflagration -- will be throwing away this document. No one should give a gov't over to one man which is what our 18th century document allows. He could not get away with this in parliamentary gov't. Immediately after Brexit Farage (or whatever is his name) fell; the London mayor is there as crony and patronized by Teresa May. So that's my view -- the whole claptrap needs to be thrown out: not just the electoral college. We were lurching towards this for 40 years and it's here now which is what our 18th century document allows.


I find Obama's normalizing stance mind-boggling. While there I remembered why I suddenly thought to myself this morning why many didn't vote. I caught a moment from Hillary Clinton's latest speech where she seemed to be (as it were) lecturing to some peculiarly tiresome tedious children they must support "our" president. Like Obama, she seems not to be aware that peaceful protest and assembly is as part of a democracy as this electoral college election.  Her tone was one of someone whose patience has been tried. Well all her learning, she is not truly clever. Why didn't she campaign in the middle states? She followed algorithms? no, she stayed away.  She is a version of Lady Russell that's who she is: can take in large issues, come to general understanding, but what takes real subtlety to see she not only lacks but turns away from because it does not suit her
Miss Drake
Tags: capital punishment, class, human abuse, politics, presidential campaign, private property, sexual abuse, social life, trump menacing clown, water-boarding
Subscribe