A friend has suggested to me that the ability to make fun of someone in public, to play cat and mouse with them and make them look bad is a trait of dictators. She instanced Nero and Caligula.

So Trump against the Hamilton players: he sets them up by sending his henchman, Pence, to see the show, accompanied by a host of paramilitarized police so that the people on the street will know Pence is there. The police were none too polite; the feel was intimidation around the theater playing the opera out of War and Peace: Pierre and Natasha and the Great comet of 1812. They can't resist making a semi-pleading courteous address to Pence while he stalks out of the audience, back to them. This was the prompt for Trump's tweets accusing them of rudeness, saying how unfair and biased this show is, and of course Saturday Night Live which some years ago made fun of Trump. He never forgets an insult himself and gets back. I'm told this played well with his followers (as they are called). Score 1 for Trump.

Then he exposes the press. He has not had any news conference, and now invites them to come to his lair as long as there are no cameras. They are astonished he spends the time berating and insulting them, refusing to answer questions, shameless. One reporter (off record of course) said "it was fucking outrageous."  Trump ejects them and then tweets about how unfair, biased coverage of him has been. I'm told this too played well with his followers. Score another for Trump.

The New York Times alone held out; Trump at first cancelled a meeting he said he would have with them; when they said, okay, he reversed himself and did meet with them and had to face a few reasonable questions, which in his usual way he deflected.

I'm told he tweeted Teresa May as to who she should appoint ambassador: naturally the lying Farage, just his thing. This was to embarrass her.

When I told another friend of my first friend's insight, she reminded me about the caricatures of Japanese during World War Two when they were interned: they had done nothing wrong, many lives were destroyed, they lost property, jobs, endured lasting stigmas. But oh how funny were these caricatures.

Down south here the reactionary local gov't bodies used to get quite a kick out of naming all black schools (before 1954 when a couple of decades of attempts at de-segregation were imposed, and the worst of these schools closed because they were in such poor repair, such eye-sores) after confederate generals who were particularly sociopathic towards blacks and ex-slaves. A FB friend reported: "the black school in my little southern town was named after Frederick Douglass. And the Houston ISD just decided to rename a predominantly black middle school that was originally named after that noted Confederate general, Sidney Lanier. The did it on the cheap, renaming it after former mayor Bob Lanier. La plus ca change.

I remember during the campaign Trump had himself photographed in the cafeteria of Trump tower eating an hispanic dinner: he smirked and tweeted: see how I love hispanics. I saw that as loathesome because of the low salaries of the very employees forced to serve him, but now realize that was not the reaction of his followers. Maybe they found his burlesque parodies of disabled people hilarious. So Hillary Clinton's commercials showing him doing this may also have back-fired.

Sophisticated analyses of satire point out how hatred and the writer's own seething ego are part of what fuels satire -- it claims to be moral and often does use humor to expose the immoral, the cruel, the vain, absurd follies.I like and enjoy satire myself when its aim is ethical not cruel. Did the press deserve that put-down?  They put him in power; CNN and FOX news gave Bernie Sanders 1/16th the coverage of Trump. On Big Tuesday, Sanders's speech was not aired anywhere but on DemocracyNow.org, and he had done pretty well against Clinton. The TV news reported false stories, kept his picture before us; I remember one reporter (from the Washington Post before it was banned) suddenly asking Trump, "Is this what it's going to be whe you are President."  And Trump said "yes," gloatingly.

But what drives the writer to write in this peculiar vein. An enjoyment of ridicule, of cruelty, of scatology frequently. Those of Trump followers not in a position to pull this off may revel in his humor now.  He has this uncanny social cunning (in the 18th century it was called "low cunning"). Is this the sort of thing he did in his ever popular Apprentice show? I had (I now gather) the mistaken impression it was just another "reality" show -- platforms for humiliating who are willing to submit to this for the publicity, money, hope for another "gig." Modern freak shows.

Well now it's the dominant news. I must congratulate his followers for providing such material for us all. So much humor ahead. Am I to give thanks for all this?

It's no use to say we used to root for Tweety as the underdog: 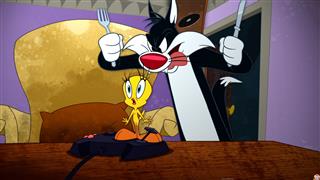