A friend (not me, honest) wrote to a listserv I'm on with him:

At breakfast this morning ... I explained to [my daughter] why Fidel was the most admirable political figure of my lifetime. I spoke of his incorruptibility, what he had brought to Cuba -- universal literacy, advanced and very low cost health care for everyone, low unemployment, proper recognition and compensation for teachers, solidarity with Africa (especially South Africa during apartheid), a refusal to accommodate US imperialism, impressive advances in medical technology and pharmaceuticals (made available at low cost), and so much more.
I told her that Fidel was widely vilified in the US and among the privileged classes around the world. And that not many Americans admired him as I do. A minute later, our waiter, a young man of college age, said he overheard our conversation and was it true that Fidel had died? I always liked him, he said."

I put this on my blog because I strongly agree and couldn't have said it as well. Another person came onto our listserv to agree. Cuba alone of all the Latin American countries has no drug problem, no ceaseless violence, health care, education and jobs for all.  No one else appeared to have a view. 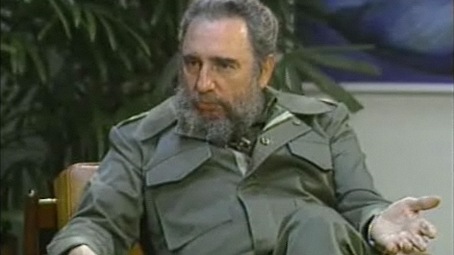 Fidel Casto interviewed by Robert MacNeil of PBS in the 1980s

I wrote in reply what I remembered most:

Fidel was an extraordinary man and that he made his revolution stick, held out against this horrendous enormous power to the north of him is astonishing. I for one do not know enough about the obvious pact Kennedy must have made with Krushchev after Kennedy brought us to the brink of WW3, nuclear weapons and all. As I think about it, that night comes back so vividly. My father was worried sick because he had received a notice to go somewhere as a "warden," and I remember his appalled horror as elected official after elected official came on TV to support Kennedyin this dire threatening of the whole world because the US would not tolerate a small communist country nearby nor any defensive weaponry: this was after the invasion of Cuba at the Bay of Pigs, several other assassination attempts and of meanwhile the US lines the borders of Russia and many other places still with nuckear warheads.

I think of that now when I see all these Republicans and business men from around the world, TV stations falling into place behind Trump. There is noth ing most individuals won't do or support when it comes to facing power and wanting money -- the great god profit is now in place.

So deeply anti-social and inhumane: someone put in charge of the department of education who is a billionaire, has never been in  a public school, is known for wanting to destroy the teachers' union while 9% of all US children go to public school -- for the excellent reason they don't have the money to pay for charter school. Ib ut the first actually willing to go to conflagration or saying they are. A lesson for us all when we think of what's to come once Trump is president. I fear that people put in charge of areas they know little about will provide a spectacle of give-aways (corruption) to corporations, loot the public treasury in effect. How would such people react to any crisis but consult their own narrow interests and ideology.

Kennedy himself may have paid an ultimate price for not really keeping his word and semi-authorizing continual attempts to overturn Cuba's gov't or kill Castro. There are links and unexplained connections between Oswald, Ruby, the Cuban emigres.

Today Castro was hailed and praised by the leaders of social democracy gov'ts in South America.

The repression in Cuba was often ugly, but it was made necessary by how determined the US was to overthrow the revolution, reintroduce deep inequality, undo all the reforms the Cubans achieved, and make Cuba a sad US colony once again.
Had there been a Cuban-style repression following the US Civil War, those who undid the good intentions of Reconstruction would've been stopped, saving us from the horrors of Jim Crow, continuing racism today, and perhaps those, like Trump, who use racist appeals today.

The question arises, Why did Fidel succeed? In France in the 1790s, the terror was the direct result of the invasion of the allied monarchies' armies into France and the counter-revolutions occurring in the countryside, not to omit the return of emigres either to their own areas or to join up with allied armies. (Charlotte Smith damatizes this in her novel The Banished Man). Napoleon's regime was undermined from its groundwork.  Was it the lack of a socialist ideal; the return to militarism, empire, hierarchyl? I know from reading that the killing and suppression of another revolution in France in 1870 and 1871 after that uprising was successful in the sense that huge numbers were slaughtered (figures higher than in 1792-3) and the rebellion put down utterly thoroughly. After the Russian civil war of the 1920s, ruthless repress was the route the communist party took to keep their socialist revolution in place.

Castro brought to the Cuban people services and self-respect they never had before. Good health care, pensions, schools, jobs (however low paid). The embargo was what prevented any growth - as the cold war hurt the Soviet Union and eastern Europe.  Still Castro and his gov't destroyed the colonialist capitalism in the island much hated from the Batista regime. Was Cuba simply small enough too? The people in general loved and revered him: they liked and were comfortable with, felt secure with the egalitarian socialist ideals. As have been many other peoples and groups of voters and nations around the world.

Back to my earlier memory:  When I think about the Cuban missile crisis (that night Kennedy went all out and all those elected officials came on TV to support) I get breathless with terror at what will happen when Trump assumes office. I am totally in agreement with Chomsky about the dangers of this powerful machinery under Trump and the Republicans, feel how wrong people were who didn't vote for Hillary Clinton (didn't vote, choose a third-party candidate). See especially his last sentence
Miss Drake
Tags: human abuse, human rights, politics, presidential campaign
Subscribe