Fascism as an anthropological fact -- Ferrante; Jaffer's Drone Memos; from the Arab Spring 2012

It becomes very hard to write political blogs as they are so egregiously without real political effect by people hitherto thought powerful. So what of mine? Each week I try to share good essays or articles, blog and interviews or books you may have overlooked; this week I begin a line of thinking derived from the strong voice of Elena Ferrante in her Frantumaglia (Fragments); move on to a informative good book on drones and end on an interview with a Syrian dissident from the original Arab Spring. 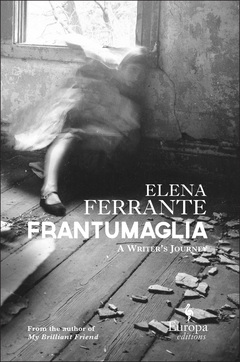 Obscenity may be defined as indecency, immorality, impropriety (from Webster's American Dictionary). I was going to write that the Rockets forced by contract or fear of not being rehired to dance in super-sexy outfits in this super-controlled way before a man who has repulsively boasted of his sexual predation, laughed at women who grieved over the trauma as women not tempting enough for him (thus liars), and shut a number of rape charges (including one from his first wife) by litigation, suit, bribery, forced to dance this way was an act of obscenity since they have made it plain to their manager as well as their union a majority of them regard this as degrading and debasing their art or status as professional women. The whole thing seemed to me reminiscent of how black concubine slaves could not escape their white master's demands.

But Ferrante's forceful exposure of why far from no one opposing fascism coming to power, but majorities voting for this derives from how a large swath of society rejoices in fascistic cultural norms -- which are deeply sex-drenched from a hegemonic aggressive heterosexual male perspective. The anthropology of male-female relationships in her imagined Naples is analogous to the way the Rockettes dress themselves, maintain their figure (as the body is called). Her heroines empower themselves through obedience. She goes beyond sexuality to how this culture believes a grand entrepreneur (she is thinking of Berlusconi) who grew wealthy, powerful, connected by his bad television and other empires can "fix" the problems of a nation, manage democratic institutions meant to answer the needs of all citizens. She says we should keep our eyes on the illusions of his target audience and constructions of his politician and corporate peers.

What is so hard to demonstrate is how this depends on controlling and demolishing women's rights as women. Trump has asked his appointees to various departments to make a list of all programs meant to promote gender equality. He's after that.  He has the treacherous snake lady, Kellyanne Conway: nothing too vile nothing too crude, too low for her to defend. Defunding all of Planned Parenthood is in his first 100 day plan. Ferrante's Frantumaglia by discussing how she came to write her first three novels, Troubled Love, Days of Abandonment, The Lost Daughter, the thinking behind them brings these connections out visibly, concretely.  makes these connections visible.

(She is obsessed with how people want to pay attention to her book if it is made into a film. I'm struck by how if a press person gets in touch with her, instead of say being glad of the distribution or briefly referring to the irony of why he or she is getting in touch, Ferrante goes on to berate the press person or reviewer. She tells the person only if she will say something about herself only then does she receive compliments or recognition from the press.. She insists on this and then ends the letter. Like Trollope In the Way We Live Now, she connects the corruption of the political and economic world with the corruption of the literary one.

I also have concluded that the anonymity was to protect herself from personal attacks far more ferocious than Rachel Cusk received because Ferrante's novels are far more intimately and centrally subversive.)

And how pathetically out of it Hillary Clinton becomes in this new context: she defined herself perpetually as a grandmother: now she walks in woods as one: 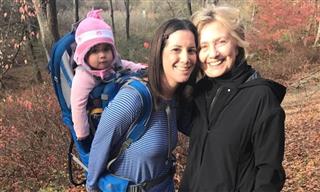 I admit how much better I like her withoutall that make-up, without her power suit: it's said that she wore a metal sheath to protect her from assassination -- Trump is still rallying his followers with "lock her up," only the phrase has wider application (or will) now.

The second topic I found something worth while to think about is the abuse of power through principle Obama used in his drone program. Amy Goodman interview of Jameel Jaffer, author of the Drone Memos: Targeted Killings, Secrecy and the Law 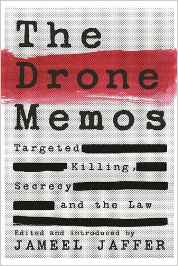 This was an abuse of power on the part of the Obama administration. He ends on how the new national security advisor, Michael Flynn, wants to define 1.7 billion people as Islamists infected by “a vicious cancer” which has to be “excised.” This is horrible. 1.7 billion people include so many different ethnicities, versions of Islam, it's absurd, blind, ugly.  This connects back because the drone program began as a tool against ISIS and Al-Quaedo.  Obama's administration sought to punish and imprison "whistleblowers:" people (Snowden was the most spectacular) seeking to bring before the American people how much data which can be used against them by such courts is being collected.

I'll add congressional committees have time and time again had before them people from the Middle East demonsrating how much hatred and fear the US brings on itself by these drones.

And if you've time, listen to this Syrian dissident, Yassin al-Haj Salen tell how a revolution to overthrow a dictator and achieve a social democracy has ended in the destruction of a people, and the installation of ruthless colonial powers in alliance with that dictator. His wife, Samira Khalil disappeared three years ago along with a human rights attorney, Razan Zaitouneh; they were abducted and what happened to them is unknown to all but those who too and probably killed them. Saleh lives very quietly as an exile in Turkey.