One of the last public statements Michelle Obama made was how we all need hope; on this day when so many deaths (bombs, drones, executions) have been happening everywhere and health care and our US pension system, is threatened, millions of decent good people marched on behalf of the extraordinary good that science has done for life on earth, and demanded that those who exploit and pollute the earth be controlled or prevented,

Read about the demonstration in DC and satellite events by and for science (remember Trump and his gang do this to make large profits for him and themselves quite literally -- it is impeachable if we had the political power).

I am having a hard time keeping hope alive for myself: I see no change or doable goal that can enable me to build a new life. 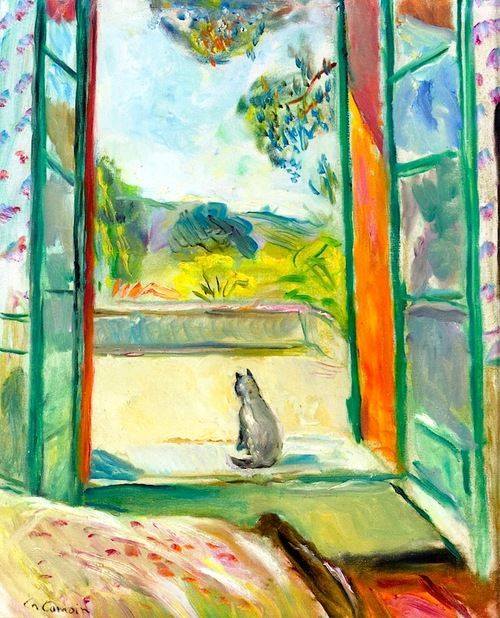 Charles Camoin, Interior with a View

among wars, the big hands of the world of death

The faces of the sufferers

in the street, in dailiness,

a look as of music

that says I am in the world

to change the world

is to love to endure to suffer the music

to set its portrait

up as a sheet of the world

the most moving the most alive

and Faust walking among flowers of the world

and the child alive within the living woman, music of man

and death holding my lifetime between great hands

the hands of enduring life

that suffers the gifts and madness of full life, on earth, in

may give the face of this music in portrait waiting for

held in the two hands, you.

The fugues come back and

A theme may seem to have been put aside,

but it keeps returning—

And it is very good that this is so."

A woman pouring her opposites.

"After all there are happy things in life too.

Why do you show only the dark side?"

"I could not answer this. But I know--

in the beginning my impulse to know

had little to do with

I simply felt that the life of the workers was beautiful."

She said, "I am groping in the dark."

She said, "When the door opens, of sensuality,

then you will understand it too. The struggle begins.

Never again to be free of it,

often you will feel it to be your enemy.

I you will almost suffocate,

such joy it brings."

Saying of her husband:

"My wish I is to die after Karl.

I know no person who can love as he can,

with his whole soul.

Often this love has oppressed me;

I wanted to be free.

But often too it has made me I so terribly happy."

She said : "We rowed over to Carrara at dawn,

climbed up to the marble quarries

and rowed back at night. The drops of water

She said: "As a matter of fact,

is almost a necessary factor

in artistic production; at any rate,

the tinge of masculinity within me

She said : "The only technique I can still manage.

It's hardly a technique at all, lithography.

only the essentials count."

A tight-lipped man in a restaurant last night

the corpse with the baby

floating, on the dark river

and the confession of No

the confession of great weakness, war,

all streaming to one son killed, Peter;

even the son left living; repeated,

the father, the mother; the grandson

another Peter killed in another war; firestorm;

this pole and that pole as the gates.

What would happen if one woman told the truth about her life?

The world would split open ....

rising within this girl

of meaning, its light and form.

out of the male, the father

from the warm woman

a mother in response.

The word of death

calls up the fight with stone

wrestle with grief with time

from the material make

an art harder than bronze.

Month looking directly at you

eyes in their inwardness looking ,

looking deep at you

alive, German, in her first War

strength of the worn face 2

a skein of lines

mothers among the war graves

stubborn upon the field

the marks of her knowing­_

repeated in the eyes

"Seedcorn must not be ground"

and the grooved cheek

face of our age

life as her son in death

pouring from the sky of

hand over the mouth forever

hand over one eye now

the other great eye

Not To Be Printed,

Not To Be Said,

Not To Be Thought

I'd rather be Muriel

than be dead and be Ariel.

The German 'Nie wieder Krieg' means 'No More War' (lit. 'never again war'), the slogan of the anti-war marches that are still held here in Aug/Sept (the

beginning of the First World War). Kollwitz produced a famous poster banner with it for the 1924 Youth Day in Leipzig:

'She ends on Michelangelo' s Pieta" and one of Kollwitz's, too:

This is the copy standing on the national monument mourning the victims of war and tyranny in Berlin - here a fuller picture: