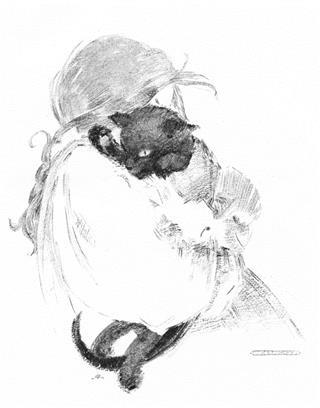 The poem below is the coda to Elsa Morante's Menzogna e sortilegio -- badly translated in English as House of Liars, a text which omits 200 pages of

the original. There has been an excellent article on Elsa Morante by Jenny Turner in the LRB for 20 April 2017. Turner comes closer to

who gives birth to an epileptic child.

For Alvaro the Cat

Your nest is in my arms,

Indolent flame-like spirit, shining one.
High noons and the shadows of night are yours

When every light is spent, the pupils of your eyes

Shine in the darkness, companion of my sleeplessness

The solemn truce is broken, a thousand torches

Burn briefly in the night, as little tigers
Follow each other in the sweet delirium.

Then your blank lamplike eyes
Are closed in rest, lights which will be in the morning

The glory of my windowsill, my double flower

And I was once your equal!

Your equal ... Do you recall that ancient time,
Creature of arrogant sorrow? Under dark leaves
We dwelt together in the shining garden

Among the simple tribes of Paradise.

My fate was exile; but your home is there
How then can you grant me your love
o savage one?

While your peers, the animals of heaven:

Live like the gods at ease, before the dawn

Holding their feasts and wars and heartless chase,
Why do you stay by my side, you who are free,

Deathless and innocent, while in my very breath
Live the three dooms of prison, sin, and death?
Among the moons and suns there, glistening thorns

Leap the immortal young, proud in their strength
In the splendid hurricane of breaking day --
All your gallant brothers with the lovely names:
Atropos, Viola, Passion Flower, Palomba.

Is it for love of me you stay?

No answer? You hide all longed-for secrets

As the Damascene sword conceals its shining blade
In a sheath of velvet, zebra-striped. The secrets of the

Are not for women's ears. Then close your eyes and

Sing me sweet flatteries in your PUTTS and sighs,
Sing praises, make your honey, 0 my bee.

The memory of all my questions fades,

Crows shadowy, and I would rest.

The simple joy of having you for friend

Fills my heart to the brim; my agonies and fancies
Die in your kisses and your sweet laments,

So deeply you console me,

a cat of mine

A very worthwhile book on Cats: Dr Nicholas Dodman's Attitudes, Emotions, and the Psychology of Cats: The cat who cried for help: this is an excellent study in the mode of Oliver Sacks: a cat whose behavior is inconveniencing or troubling its owner is taken to Dodman who diagnoses the ill often mistreated cat and then extrapolates out from there. It will help you understand your cat, treat him or her more humanely, have a good relationship on both sides.  It will also show you how cruel and thoughtless owners are: how they do not see the cat for itself but as an adjunct of their own existence. I do this too, I am as guilty, and like many try to find some compromise between the way I want to spend my minutes, hours, days and what the cat wants as well as what is good for it. The great controversy is whether to let the cat go out. It's too late for mine as they are over 8 and have never been out.  They sit by the window and look longingly and I know were I to leave the door open eventually they would go out. They would probably be quickly killed - run over, starve (as they have never been taught to eat what they hunt). It's too late for them; for others the outdoor life shortens theirs, but I understand from the book that British cats mostly are indoors/outdoors. Sigh. They have as many cars as Americans, as many diseases.

Following Dodman I know Ian cries because he needs more play and I am now playing with him more and he is yet more enjoying life. This book can make for less suffering and loneliness in the world as so many own cats or care for them if only we will listen to, heed Dr Dodman.