I'm about to start watching The Crown, Clare Foy as Elizabeth II when young. Yes I updated my Netflix plan and now not only get DVDs, but movies on demand: streaming. That includes mini-series and movies made for Netflix. Yes I know the most important prime minister was Clement Atlee just before her reign, and he's barely mentioned -- he created the National Health, nationalized industries, poured money (well whatever he had) into socially beneficial programs. The Crown thinks the man who mattered was Churchill.  Its politics (if you could call the references to their power that -- the women are made the "true" powerhouses inside the house), reactionary -- men protect women, people shoot ducks as a last noble moment - -it is humorous, half-comically making fun of many of them; that saves it.  What the film does is show us how important a symbol Queen Elizabeth II has been for a certain strata of the British people since her commendable conduct in World War II. 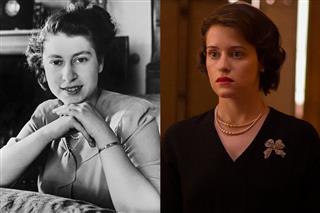 So I imagined that she at long last used this power where it should count. She does not personally tweet. She held the equivalent of a news conference for a queen, and on the eve of the British election called upon Teresa May and Jeremy Corbyn to pledge not only not to give Trump a state visit, but not have him come at all.  She would have herself to issue the invitation -- or her people, the palace. She would have to welcome him.  He stands for everything that Britain over these past few days has not. The two candidates have fought over how many police are on the streets not the values of justice for all, sanity, decency, respect for all, keeping an open society, all that this man's foul tweets abused. She gives said speech or statement. Very quickly Corbyn comes on to agree referring to her as the people's representative -- or some such phrase. May hesitates. Fatal. Sadiq Khan thanks her.  So May comes out finally to agree.

Trump goes into a series of unhinged tweets that brutally insult the Queen. I do not want to imagine the grossness of what he might say -- vile attacks on her body, her age, raw.

Meanwhile Republicans looking at this health care bill, the tax bill and now this vague infrastructure are beginning to think maybe they are better off with Pence. I realize this is the most problematic part of my fantasy. The rest could conceivably happen. The total lack of any integrity, honesty, responsibility (Trump is edging towards nuclear war, he wants war with Iran, nundreds of people killed across the middle east, is utterly corrupt financially, issuiing waivers so others can, &c&c) does make it improbable they would invoke the 25th amendment. But it is the best and swiftest tool  Grant me my fantasy. They invoke it. The resolution is passed by a sizable majority of the congress.

Trump refuses to leave but he is no longer head of the army -- not by law. And law prevails. The White House is surrounded; he is forced to leave.

Only the Queen of England could have pulled it off.  The Pope could not come near this. 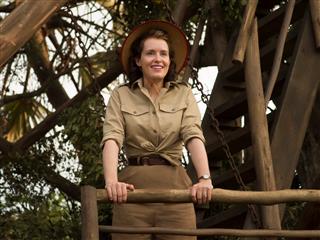 As Princess Elizabeth -- she was also Anne Boleyn, who endured a very different fate.

People will say most US people don't in the least care about Elizabeth II or the royals; Charles III is PBS fare. Fair enough. But if she would only refuse, it might engender such a storm of lunatic misogynist tweets ... Merkel lacks the numinous status. 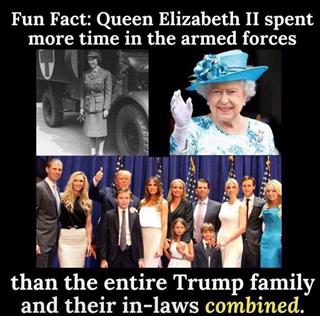 Update:  I wonder what the German newspapers are saying? Trump is fomenting a war with Iran; he thinks he can do it what Bush and Co did to Iraq. And it's working, the coalition he's engendering "against" Qatar is a step (from his dangerous vicious point of view) in the "right direction."  I cringe when I hear Mattis talk of the aim being annihilation when he's told so many civilians are dying and references are made to innocent families. In the Trump world there are no innocent Muslim families. On the campaign trail he explicitly said "we'll go in there and take the oil" of Iran (and terrible man Guiliani endorsed this as, is not this what nations have done for centuries, laughing) and that families of terrorists should be killed. Mean when he intervenes personally raid after raid is "botched:"  how can we tell when these botched? why American military personnel die.

He is though succeeding in formenting this war: read or watch this: