Women journalists and news anchors seem to me to write and host the best pieces on Trump; a few weeks ago now Rebecca Solnit wrote one of the best accounts of Trump's real career as a failed semi-criminal businessman; well in The New Yorker, Emily Nussbaum has written a counterpart to Solnit: Nussbaum's essay demonstrates how Trump's invented identity on TV; the reality show, The Apprentice, made this presidency possible:

Then turn to Amy Goodman and Allan Nairn to hear what's happening that matters behind the circus show of Russia (mercenary colonialism returns):

Even the studiously neutral and carefulJudy Woodruff has her moments: tonight she reminded of what the triad nucleat set up is; on the website several pieces o the US arsenaland do watch who's at the trigger when the president calls a nuclear strike:

Not to omit Emma Lazarus who will become another foremother poet in a blog to come:  a statue not of a killer-hero, but a mother with a torch of welcome and light: Like so many 19th century women writers, she was once almost a household word; like many American writers until the Post World War Two era, when the FBI and all sorts of organizations went after socialists, progressives, anything leftist, she was socialist -- Wm Dean Howells was a socialist, no one more centrally mid-western American, he was editor of the Atlantic for years and years. Nowadays she is only known by the one poem by a vast majority of people might not be able to tell you the name of the author. Carved onto the Statue of Liberty. The New Colossus:

With conquering limbs astride from land to land;

Here at our sea-washed, sunset gates shall stand

A mighty woman with a torch, whose flame

Is the imprisoned lightning, and her name

Mother of Exiles. From her b eacon-hand

With silent lips. "Give me your tired, your poor,

The wretched refuse of your teeming shore.

Send these, the homeless, tempest-tost to me,

I lift my lamp beside the golden door!" 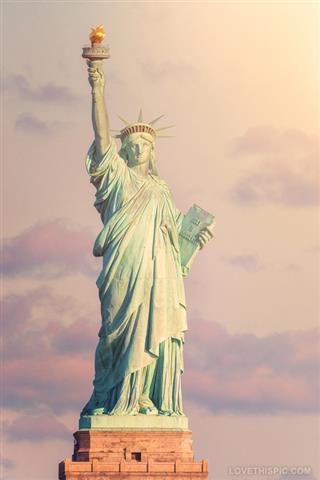 All four of my grandparent were immigrants; they came through Ellis Island from Poland. My father didn't speak any English until he was about 7; by 8 he was utterly fluent in English, reading and writing but for the rest of his life could slowly make his way through a little written Polish. My husband, Jim, was an immigrant, born in Hampshire, England.