Listen to Martin Luther King; read, follow his advice, do what you can ....

It is immensely important to keep Martin Luther King's words and life career before us today. What the man did, what he attempted, what successes he had.  Honor him and all he stood for. Listen up.

Then do something: if it is only writing a blog, wearing a button, carrying a sign, going to a food pantry to help out (there is one forming on the other side of my city as a way of remembering overtly Martin Luther King. We must "keep hope alive!"

I am glad to be able to say there was a march in Falls Church today and the congressional representative I voted for was there: Don Beyer. For racial unity, sponsored by  the Tinner Hill Heritage Foundation for a 2nd year.

I end on a link to the essay by Wm Barber published just today in the Nation. He carries on King's work.

So  first, here is one of Dr King's last famous speeches, a time to break the silence: Let us develop a kind of dangerous unselfishness.


King is calling for fighting people who take your jobs from you, to go to court, to demonstrate, to boycott all those who take from you that you need for a minimally decent life. He is holding the people in power to the laws of the constitution which give all people the right to protest, to strike. He outlines practical things for us to do. Put pressure where it hurts.

Listen to King: violence is non-existence for us; we are men and women, and what we are seeking is to live good lives

There is another just as important, more detailed, given at Riverside Church. You can read the whole text here.

He was murdered because he might have gotten into power, actually won some state-wide public office and then (who knows? Obama did it) some federal  power, even president. And he had begun to make serious speeches decrying not only the domestic policies and racism of the US at the time but the horrendous foreign policy decisions, of which the Vietnam slaughters were the contemporary manifestations.

*****************
Today I know people who becoming literally ill; over the last week have spoken to friends and read emails where the Trump regime policies and what Trump does and says literally sickening our population ...

These past two weeks of tweets and this latest moronic stupidity went beyond what should be endured. Photos of Trump looking so stupid, smug face, closed eyes, arms akimbo, tight across his chest, calling lands around the earth with black populations as shitholes.

Details: I know or know of a number of sick people, people on drugs of all sorts, drinking opioids, in hospitals. I know of many people with no jobs, or any decent-paying or at all self-respecting jobs at all, tiny sums and insecure; where once they would have had a good job, they are not treated well. Retiring from agencies where they cannot bear to see what's not being done: say not stopping debt collectors from hounding students. The POTUS is a symbolic figure as well as a powerful man. Just about all US agencies are dying and no jobs are being created at all, and the privatization already done by shutting down and selling out gov't work, which started with Bush I and was accelerated in Bush II, has been devastating. People who work in these agencies left to rot are retiring, finding another place, demoralized.  Hospitals all for profit, doctors pushing drugs. Schools privatizing; enormous debts for many for school or health care. No affordable housing so tent cities, people doubling up in small spaces. And the air waves filled with poisonous toxic comments. The #Metoo campaign for women makes no in-roads on the mass of women's employment: a vaunting sexual predator in charge. Nuclear war a possibility!

We won't get bored by Trump unless we ignore the results. Most of the park service in the federal office actually resigned yesterday. The head of the department of interior is holding a shameless fire auction and selling off vast lands belonging to the taxpayer -- bribes happening too. In the central cafeteria of the federal building a huge target called Big Buck Hunter complete with plastic rifles. It's not for entertainment: it's an egregious assault on the values of the place meant to warn and intimidate; it's an insult to all working there. Elizabeth Kolbert's "Slash and Burn,"
https://www.newyorker.com/magazine/2018/01/22/the-damage-done-by-trumps-department-of-the-interior
As Elizabeth Kolbert we can change the tax laws back but once these lands are ruined, it will take decades to bring them back .Acquifers (she does not say this) never come back.
Trump would like to bring people to the US from Norway because just about everyone is white; why aren't they brought in?

Norway is a country with  good and secure jobs for all, with pensions, single-payer health system for all, it has short prison sentences for most disobedience to laws, it has no capital punishment, no guns in circulation, a place which refused to turn to hate when a crazed hateful Nazi type murdered a large group of people he was rightly treated as a madman. No prison for debt. It doesn't have cops loaded with fierce military weapons, killing with impunity. No deeply injust justice system with huge numbers of people put into solitary confinement and then deprived of their right to vote when they get out Norway has a single-payer health system, pensions that are paid for and then delivered to people for lifelong work, good public schools, well-funded, university education

Haiti is destroyed, El Salvador a place of mad murders and drugs because the US gov't 30 years ago destroyed their social democracies by killing leaders, destroying all that could built such a system. He is deeply poisoning the US in everyway as his presence also stimulates the worst people to become violent, hateful and his judges will say that intolerance is tolerance and so on. The jailing of black people in the way done is a return to slavery. On this buy or rent James Baldwin's I am not your Negro to hear more about KIng, Malcolm X and Medgar Evers (head of the NAACP, also assassinated by his mid-thirties. My hard-working African-American friends look distressed and have tears in their eyes when they open up to talk for real.

Numbers to keep in mind: 3/4s of Puerto Rico is still without power; nothing, nothing whatever is being done to help them after having been devastated by corporations. 39% of the US population has consistently voted liberal democratic since the end of WW2; that Hilary Clinton won the popular vote.

It'll help to have democrats in charge of the senate and congress but not until he is ejected from office can any health return. He must be got rid of first. The democrats must Impeach him upon winning the congress sufficiently.

For myself I subscribe to the New York Times, Washington Post, The Nation, New Yorker, am a member of the Guardian, support ACLU, the Southern Poverty law center, Planned Parenthood, Doctors w/o Borders, member of PBS, upport Amy Goodman, WAMU radio, and buy what limited meat we eat from free range farms. Boycott where I can. I'd join a union if there was one in Virginia for university people, I'd strike; I'll vote against all right to work, spread of guns laws, for tax redistribution, against all wars. Go to lawyers when you are cheated if you can find one you can afford. That is his message. Don't take the punishment hopelessly. Join with others.

Going back in time, at Pacifica Radio, was found a tape of a speech given by King on December 7, 1964, in London, just before Dr King was awarded the Nobel Prize: it centers on the history of segregation and punitive exclusion in the US and the recent progress made after Johnson signed the Civil Rights Act that summer.

From Dan Cantor of the Working Families party:

"The first is Dr. King's astounding closing speech at the end of the March from Montgomery to Selma. He is clear-eyed about "the brutality of the dying order" that is trying to block the freedom struggle, but always hopeful about the possibility of victory. You'll hear King's voice in your head as you read. The history lesson King gives us about the southern "Bourbons" suggests that Americans of an earlier time knew their history better than we do, and it's important that we learn it too.

The second is an article just published in The Nation magazine by Rev. William Barber. He connects the dots as no one else can, and I urge you to learn about the Poor People's Campaign that he has launched. I had the chance to meet Rev. Barber when he spoke at a WFP celebration in Washington a few years ago, and he is a visionary and a strategist with few peers. 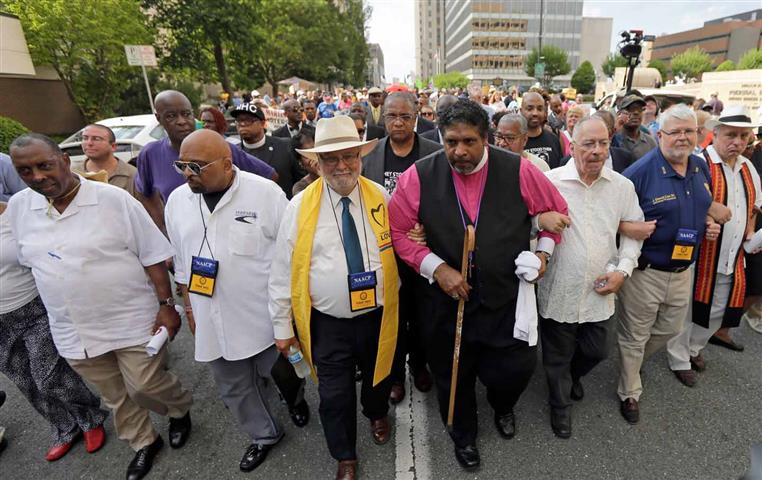 That's it. Here's to the struggle ahead, and to the memory of the Reverend Doctor Martin Luther King, Jr. "

Let us never forget him. Imagine if he had become president of the US.