Gaza: what is happening

Very few places online and news shows are telling what is happening in Gaza.  The only place where it's made clear is DemocracyNow.org

Here is the key dialogue between Amy Goodman, Juan Gonzalez and Muhammed Shehada:

Amy Goodman: If you could, Muhammad, talk about what is taking place right now? Your brother is on the front lines in Gaza of the protests?

MUHAMMAD SHEHADA: He actually was. He recently managed to get out of Gaza, after two years of waiting on Rafah border crossing, which was a miraculous divine intervention.

But speaking of the Gazan protest, virtually everybody I know in Gaza, almost all my friends, are going there to the front lines. And the problem that pushes them to the wall is that life at the refugee camps, they experience death thousands of times a day, while at the borders they either break free or they die for once. The point is that people are trying to undertake a mass jailbreak out of what David Cameron, the prime minister of—the former prime minister of Britain, called an “open-air prison,” what a Haaretz editorial calls a “Palestinian ghetto,” and what Israeli distinguished scholar Baruch Kimmerling calls “the largest concentration camp ever to exist.”

Then you have the call for return, which is the main theme of the protest. And that represents even deeper and deeper desperation amongst the masses. The call for return does not constitute, what Israel claims, an attempt to destroy the state of Israel, but it rather shows that Gazans have given up about the place where they are caged. They are trying to right the only wrong in their life, that causes all their misery—namely, being born on the wrong side of the fence. And that separation fence is what separates between life and death, future and going nowhere.

JUAN GONZÁLEZ: Muhammad, I wanted to ask you about this issue of the open-air prison. Most people around the world do not understand the—how contained the residents of Gaza are. Can you talk about how difficult it is even to get in or out of Gaza, for either Palestinians or even other international visitors?

MUHAMMAD SHEHADA: Well, for the Gaza Strip, what you have is, as Harvard scholar Sara Roy calls, 2 million people, most of whom who are children, are being slowly poisoned by the water they drink and the soil on which they plant. Moreover, those 2 million people are not allowed—virtually, not allowed to leave at all. Gaza is completely sealed from sea, air and land.

There are two border crossings that are almost virtually permanently closed. The Israeli border crossing, only about 500 people could manage to leave Gaza annually. If you put that into numbers, that’s absolutely nothing of the population. The Egyptian border crossing is far more disappointing and disheartening. It opens three days a month, at most. That’s the best of it. Last year, it opened about 14 days in the entire year. And when it opens, Palestinians experience endless waiting, suffocating heat, blackmail, and detention in rottening cells. What you have on the Rafah border crossing, from my own experience, is waiting for at least 18 months to come out of it. Then you are brought to this room of the Egyptian side of the border. You sleep there the whole night. Every 10 minutes, an Egyptian officer would come out and announce another name, and that name would be thrown back to Gaza without further explanation. And you absolutely don’t want to be the next one. So you would do anything at all not to be sent back into prison. 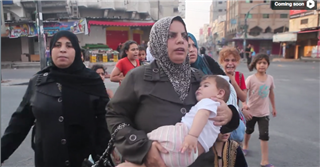 There is a film which tells the truth, Killing Gaza, but it has not come to any area I live near:

Israel’s blockade of Gaza—where trapped Palestinians for the past seven weeks have held nonviolent protests along the border fence with Israel, resulting in scores of dead and some 6,000 wounded by Israeli troops—is one of the world’s worst humanitarian disasters. Yet the horror that is Gaza, where 2 million people live under an Israeli siege without adequate food, housing, work, water and electricity, where the Israeli military routinely uses indiscriminate and disproportionate violence to wound and murder, and where almost no one can escape, is rarely documented. Max Blumenthal and Dan Cohen’s powerful new film, “Killing Gaza,” offers an unflinching and moving portrait of a people largely abandoned by the outside world, struggling to endure.

Cohen and Blumenthal, who is the author of the book “Goliath: Life and Loathing in Greater Israel,” one of the best accounts of modern Israel, began filming the documentary Aug. 15, 2014. Palestinian militias, armed with little more than light weapons, had just faced Israeli tanks, artillery, fighter jets, infantry units and missiles in a 51-day Israeli assault that left 2,314 Palestinians dead and 17,125 injured. Some 500,000 Palestinians were displaced and about 100,000 homes were destroyed or damaged. The 2014 assault, perhaps better described as a massacre, was one of eight massacres that Israel has carried out since 2004 against the 2 million Palestinians in Gaza, over half of whom are children. Israel, which refers to these periodic military assaults as “mowing the lawn,” seeks to make existence in Gaza so difficult that mere survival consumes most of the average Palestinian’s time, resources and energy.

The film begins in the Shuja’iyya neighborhood, reduced to mounds of rubble by the Israelis. The wanton destruction of whole neighborhoods was, as documented by the film, accompanied by the shooting of unarmed civilians by Israeli snipers and other soldiers of that nation. 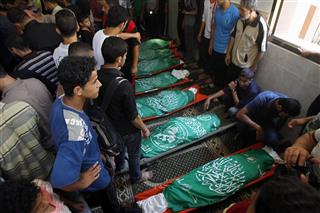 After a bombing raid -- dozens of children killed

John Nichols in the Nation concentrates on congressmen not allowed into Gaza; beyond the killing, he does not explain why the people go to the borders:

The Guardian is typical in not saying that the Palestinians aren’t allowed out:

Judy Woodruff on PBS spends 50% of her three minutes on the embassy in Jerusalem, repeats the Trump administration claim the Palestinians are to blame and then supposedly tells the Palestinian side of the story -- omitting much of the above and imputing the demonstrations just about solely to the making Jerusalem the capitol.

I wonder why the Nazis didn't call the setting up of concentration camps a propaganda stunt by the Jews, socialists, disabled, LBGT people then>

Thisis the Warsaw Ghetto all over again. Horrifying.

Now 5/17: a group of doctors deliberately targeted by Israeli snipers. Out of 19 medics all of whom were working ably for over a couple of weeks, of course careful to avoid all fire, within a few hours 18 badly wounded and one killed: