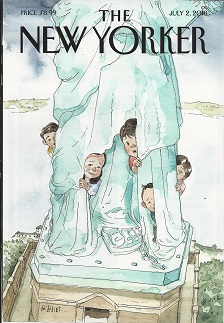 We can no longer know how long we may be able to be in communication with one another. This morning the US supreme court has upheld Trump's Muslim ban; this together with the sustained approval rating among those who voted him in after he snatched children from their kin and put them in prisons with no intention of ever returning them, will make the man very bold indeed. There is now an issue of safety for each of us, all of us. One has to recall that there are increasing numbers of countries shutting their doors to all emigrants.

Reich reveals the names of the corporations making large profits setting up private prisons around the US. Note beyond upholding the Muslim ban on the grounds the US president has the right to protect the safety of people living inside this country (something not at all at risk from these immigrants, we are at risk far more from the spread of guns and massacres by young white men), the supreme court has upheld voter purging, racial gerrymandering, religious intolerance (though on narrow grounds) and controlling what medical care women may access publicly. What next?

This video is called Trump's Cruelty Industry, Now This:

The most important of all this important information is large groups of people in the US are now making a huge profit on these private  prisons, whose privacy makes what goes on them accountable to no one but themselves

Usually I prefer to share an essay or review you might not have seen or heard. I notice that Robert Reich's important video on the setting up of detention camps is not being repeatedly shown on face-book in the way most of Reich's videos are. I should say I believe that the repeated attacks on face-book as peculiarly pernicious or a surveillance tool over those using it are an attempt of those who want to keep people isolated from reaching this vast platform. Face-book has available to it no more than the local police in my area do; the political slant any particular individual gets mirrors his or her outlook and does not sway anyone in a direction they don't want to go. But face-book is careful not to repeat anything truly subversive more than once and it vanishes except if the person puts it on their timeline. They also have some monitoring mechanism where they prevent pornography, sexual activities they think most people would be offended by if presented in public, and videos showing police violence towards citizens.