Did you know you don't have the right to vote?

It's not in the constitution; it's not protected by federal law since the demolishment of the 1964 Civil Rights Act. Quite deliberately, your right to vote is left to localities, which have,  except during the brief period from 1964 until the now deeply anti-democratic supreme court abrogated it, done all they can to stop large groups of ordinary citizens from voting: yes mostly minorities, but also women, and nowadays jail is added as a technique to stop you. 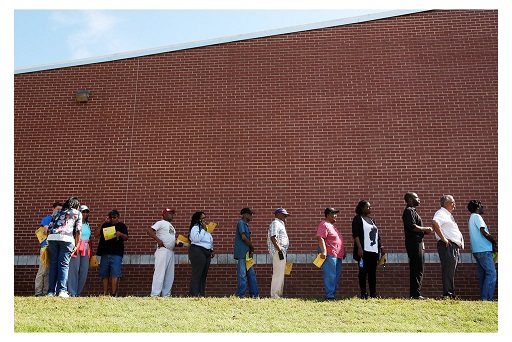 Read about it in a review of Allan Lichtman's The Embattled Right Vote in America reviewed by James Morone in the New York Time Book Review for this past Sunday, Sept 16, 2018: I cannot better his words:

Protesters marched through Marion, Ala.,
on a winter night in 1965. Suddenly, the
streetlights went dark and troopers charged
into the crowd, beating them with clubs and
blinding them with flashlights. Jimmie Lee Jackson fled with his mother and grandfather into Mack’s Café,
where the police chased after them, threw him
against a cigarette machine and fatally shot
him in the stomach — one more victim in the
battle for the right to vote in America.

Fast-forward 35 years to the Bush-Gore
debacle of 2000. Republican election officials
in Florida quietly dumped 180,000 ballots,
casting aside one in 10 African-American
votes, often for minor irregularities.
Republicans on the Supreme Court invoked
two centuries of jurisprudence when
they stopped a recount: “The individual citizen
has no federal constitutional right to vote
for electors for the president of the United States.”

I met a woman on Sunday who is inoculated against information -- indeed a whole group of peope at a table at the Jewish Community Center. It was a meeting of a club of disabled young adults. Instead of a picnic, since the budget had again been cut and there are no longer councilors to help with games on a beautiful day we were in a gym with two pingpong tables, boardgames and far too much junk food.

I found myself being looked at with derision when I asked a man who was boasting (probably) he goes to Okinowa a lot whether there isn't continual opposition to what he's doing. He smiled and said oh yes lots of demonstrations. He told how his identity had been stolen, a bank account which money was sent through by a crook. So I replied about the news about Manafort: he was caught doing this and it's documentable. A woman there asked me where I had read this and I said the NYTimes. She grinned and said ah, she never believes anything written in such papers; all lies. She looked at me & in her eyes i saw something strange. A kind of glittering hatred. I got up and walked away, saying I will not sit here. I can think of all sorts of things I might have said.

This is the first time I have met such people face-to-face. The room was probably filled by such people. I should not succumb to this but I couldn't help see the parents & many of the young people there as stupid when at least some of them were merely desperate. The stories a few told me about the job market were terrifying when I think of the possibility Izzy could lose her job. The few jobs available are for war or predatory tech companies.

At that table what was meant was everything in these two reputable papers are total lies. They were supporting Manafort! They looked at me with derision and mockery -- they were exulting in a superiority. That's what Trump gives these people. For decades they have hated liberals and elites and minorities and now they have license not only to do so openly but disbelieve whatever they hate believing. He is a dangerous man to have given them this. These people are angrily fixed in a set of delusions nothing will persuade them out of. No joy allowed for anyone.

Story after story of their young adult children having no jobs no social outlets.

I report another cut at the Pentagon: the civilian wellness program. I didn't realize the four hours a week Izzy gets to go to the gym are out of a civilian wellness program. It will be cut and she will not have an hour off in the middle of the day and an hour earlier off on Friday (she swims). How much is saved by taking this away? nothing. Numbers on paper. But relief from tension is not to be allowed. She'll have to stay an hour later to get exercise -- and the effect on the workday of all is lost.
Inform these groups of people they are disenfranchised, they turn away in mockery.