Our democracy crumbling before us; Trump drills a stake through the #MeToo movement's heart

It's been a grim week.

So before I offer two crucial news essays for this week; Trump's profoundly ugly but successful use of ridicule humiliation and dismissal of all women who experience (and this is common), violence, assault, rape, humiliation; and the theory of the Baron de Montesquieu, an Enlightenment thinker on the necessity of keeping the three branches of gov't apart, representative of the majority of the people,and disinterested -- I'll try to lift our spirits by saying we should remember however powerful these people are becoming over a majority of us, they still don't speak for us: as Shelley said, we are many and they are few. I recommend that you play and listen to her words as your read. They will help remind you we are not as yet altogether powerless

Judy Small is a judge (!) in Australia.

The most important crucial news essay of this week was one which told of specifics of the US gov'ts corruption such that it is crumbling away before our very eyes: "The Suffocation of democracy" by Christoper Browning in the New York Review of Books

It's the destruction of the judiciary as a decent arm of gov't. Trump is busy destroying all agencies, putting at the head of these people ignorant of their mission and hostile to it, 205 of the federal force has left; many positions unfilled now. The congress is utterly gerrymandered and, taking into account the disproportionate representation of small states, is not at all representative, and now the judiciary goes.

The second contingent on the first, or part of it:

On TV millions of people watched as a congress made up of people who represent a minority of the US population disregard credible evidence not only from a woman, a professor Dr Christine Blasey Ford, who had been in high school assaulted, raped,&  humiliated by Brett Kavanaugh, a man nominated for a life-time supreme court justice, but from a group of sources the FBI deliberately ignored,which showed he did this sort of thing in high school and again in college for fun. With a group of like-minded admiring men, Mark Judge among them.

We had earlier seen him perjure himself in minor ways; now he perjured himself Writ Large with rage and anger all over him that he should be called to account for this behavior. Despite huge popular protest, the Republicans put him into office because he will not be an unbiased judge but a fierce reactionary partisan, eager to put in place whatever agenda Trump asks for This includes wiping away Roe V Wade, perhaps the right to contraception based on denying that individuals in the US have no right to personal liberty or privacy because it's not mentioned in an 18th century document which condones slavery and set up an electoral college to stymy a popular elected president across the US lest he abolish slavery.

Along with this The FBI has deliberately ignored, not followed up on, dismissed a number of stories about Brett Kavanaug, now made a supreme court justice for life, truly hideous behavior (it's emerging) in college as well as high school. From my little knowledge (really) of what my father told me went on among men as factory owners, I wonder what Kavanaugh has been doing all these later years with these same Prep friends. We have put a radical reactionary partisan ready to do Trump's bidding and absolve him of any crime (as a president is above the law as he is too busy to be bothered ), and  repeated rapist, humiliator of women (and perhaps men too) on the supreme court: Jane Mayer and Ronan Farrow on the suppression of the FBI investigation:

And lastly, but never least, this not so much a news report as what happened: after Dr Ford's testimony, and Kavanaugh's rage, it seemed he might not be confirmed. Trump made a speech where he said listening to women tell of assaults and rapes is "dangerous" to men, and then he went out to rallies and ridiculed Ford, distorted what she said before the senate so it sounded like she remembered hardly anything, mocked, derided, and parodied her and -- to these people succesfully destroyed her by proxy humiliation. Nixon used to say in achieving a majority of people on your side you cannot go too low. It worked. Within two days, the male republicans and all but one female were prepared to erase Dr Ford.

Thus Trump has driven a stake into the heart of whatever purchase the #MeToo movement had -- not much as it depended on women who could get the public to listen shaming and either going or successfully threatening to go to court against men who are powerful but have a lot to lose who harass, rape humiliate punish them. Now Trump has shown that ridicule, mockery, humiliation, distortion works just as strongly as ever and we are back in the 18th-19th century situation. And he was backed by Collins who does what she does to gain attention -- she is a lying sniveling (how "concerned" she is before throwing the ACA under the bus) hypocrite: give-away when she called Kavanaugh a "moderate" and "good man." He still had to pretend to start an investigation but when other credible evidence started to appear (see the New York) the FBI suppressed and ignored all other witnesses. The third woman became " the third woman" (not a person, not an individual). The point is to inhibit women from speaking out. For himself he has paid millions in litigation to silence people who have accused him of fraud, asault, and other crimes.

It's now Open season on women. Open season on blacks began when Trump in his rallies threw African-Americans out and told his crowds to beat them and reporters up. He has succeeded in making open season on Muslims by his ban. He has committed his ICE to crimes against humanity by separating hispanic children from their relatives and putting them all in detentions centers for not following regulations or attempting legally to emigrate as refugees. Shortly after becoming president, he made it plain, cops can kill with impunity when he made a gesture and told them to rough people up; and now open season on women. To women Trump has said: Just dare and we'll so shame you you won't be able to show your face again. So, Go ahead guys ... have fun and control "women." 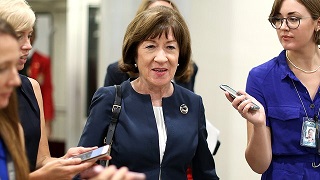 This is Susan Collins, look at her, see the lying hypocrite who for a second time drew enormous attention to herself by driveling on about how she is "so concerned": before for millions needing ACA, now for what?  over a liar (like herself) also thug. See how she dresses herself, how much time and care, how she loves the attention. She called Kavanaugh "a moderate." She betrayed all other women who are now at greater risk -- there is set afoot a new attempt to silence protest against violence. She grins with her petty power as she throws us all under the bus.

After reading Christopher Browning, the New Yorker article and thinking about what's to happen on the supreme court now that two radical right judges have been placed there by a minority party, I went over to Charles-Louis de Secondat, Baron de Montesqueiu who invented in his Spirit of the Laws a three-part gov't where he argued to prevent tyranny all three branches of gov't must be independent of one another and answer to their constituencies by whom they are elected and from whom they come. Here are three of his central axioms:

When the legislative and executive powers are united in the same person, or in the same body of magistrates, there can be no liberty; because apprehensions may arise [rightly], lest the same monarch or senate should enact tyrannical laws, to execute them in a tyrannical manner.»

A judge must be non-partisan; must not be allowed to serve for more than a short de-limited time, because "the power of judging is terrible," and he should have nothing to do with the prison system. He tells how to recognize dangerous corruptions, how the Romans lost their liberty.

The book is also about the spirit behind the laws; it's not enough to follow their routines literally; but your spirit must be for liberty, for justice, for true representation so commerce (social life, education), can go on. Montesquieu also pleaded for the abolition of slavery, and the harsh punishment of suicides (desecration of their bodies, seizing of their property by the state) typical of the era. 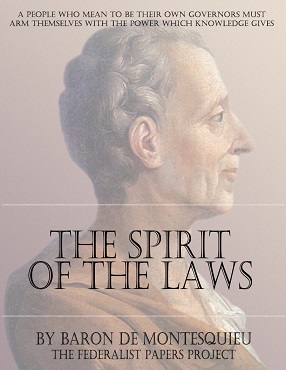 Billionaires now set to destroy social security, free public education and medicare -- you can do that when you control the house, the senate, the supreme court and the presidency. They've already driven a stake into the heart of medicaid by demanding very old people work before they can get any health care.  They are too old to work, and the idea is to separate work as a requirement from the right as a human being to have medical care.