The blight: It is galling to hear this woman talk about how she is bound to follow "the will of the people," i.e.g, the ridiculous referendum which said to a questions, shall we leave the EU? yes or no. The UK parliament is utterly gerrymandered and even so to stay in power this woman requires neanderthal Northern Irish.

On Brexit, the Guardian: 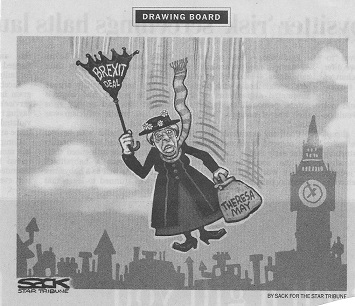 I am even more tired of being told or hearing the semi-justification for whatever Trump wants this week -- now us to pay billions for an idiotic wall -- is that he promised his "base" this. Therefore it's understandable, okay. What if he had promised his base to shoot to kill the next 10 non-white people he sees upon elected, would that be okay? Since when is a promise to a constituency to get them to vote for you a vow you must obey? Then I'm told or it's said "he's stubborn" What! the gov't left to rot, a quarter of all federal workers without pay they need, people driven like cattle to a border in order for them to catch one another's sickness, children dying in detention camps .... He promised this to a base and was elected so it's fine ...

From what I read this morning Trump is all set to destroy another 800,000 lives -- that's the quarter of the federal workforce now "shut down. He rejoices in firing 1/4th of the federal work force. After all Erdogan fired, imprisoned and murdered far more. And remember there are all the contracted people, from cleaning and food staff to IT people. What fun. Beats The Apprentice which gave the bankrupt washed up criminal type his new lease on predation. Then he could fire only one at a time.

A good article in the New Yorker 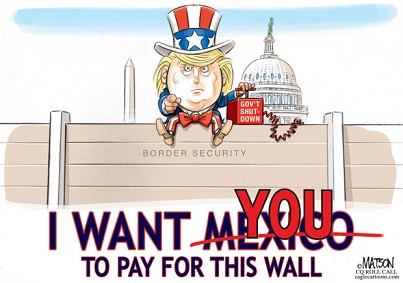