Actually what this "shutdown" is, is a refusal to pay over 800,000 federal workers; millions of contractors; latest developments: somehow Trump has the power to unfurlough some workers and of these to choose to pay some and not to pay the others ....

Today Barbara Ehrenreich and  Gary Stevenson called for TSA workers to walk off the job in protest of the gov't shutdown. If they walked off within hours, McConnell and Trump would stop this trick of attempting to shrink the gov't: they are humiliating now millions of workers (including all the contractors); it's a contradiction to say Trump is doing this for national security when the very people not paid and forced to go to work are the people responsible for our bodily, food and other security; it's in violation of the 13th amendment which says there is to be no involuntary servitude (for no pay):

Watch and listen to hear about all the "blue flue" -- people staying home and now beginning to seek other employment, people without sufficient food, no money for rent or various payments. Goodman goes back to when Reagan fired all 11,000 air traffic controllers and thus sent a devastating blow to unions.

Read the Op-Ed in the New York Times:

The question is what comes next. With no end in sight for the shutdown, should the T.S.A. workers continue this passive-aggressive form of protest? Or is there something more they can do, something that would turn their plight into a stand not just against the shutdown but also against the arbitrary and insulting way American workers are so often treated in general?

T. S.A. workers should use last year’s teachers’ strikes as a model. They were called not by the leadership of the teachers’ unions but by the rank and file. It was a new kind of labor activism, starting at the bottom and depending heavily on community support. By sticking together and creating their own communication system, the teachers succeeded in sending a powerful message of solidarity and strength.

A strike by T.S.A. agents, as federal workers, would be illegal, as was the wave of public-sector strikes in the 1960s and ’70s. But this time is different, said Michael M. Oswalt, an associate professor of law at Northern Illinois University College of Law, who studies federal labor relations. “A strike over involuntary work would raise not just novel legal issues but important and unprecedented questions about the value of public service and middle-class employment in our country,” he said.

The moral foundation for a strike is unquestionably firm. The federal government has broken its contract with its employees — locking some of them out of their workplaces and expecting others to work for the mere promise of eventual pay. An even more profound principle is also at stake, namely the ban on slavery and involuntary servitude embodied in the 13th Amendment to the Constitution. 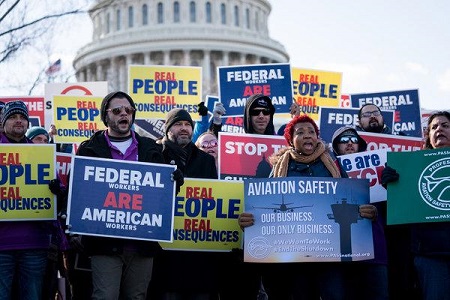 A demonstration two days ago

Further from transcript of Ehrenreich and Goodman's conversation:

House Speaker Nancy Pelosi called Wednesday for President Trump to cancel his State of the Union address later this month, arguing the government shutdown has left the Secret Service and Department of Homeland Security starved for funds and unprepared to simultaneously protect all three branches of government.

Meanwhile, the Transportation Security Administration has become a flashpoint for growing outrage over the mistreatment of federal workers due to the shutdown. In Florida, the Tampa airport has set up a food bank for unpaid TSA workers. In Phoenix, Arizona, a food bank served nearly 300 TSA employees from a mobile pantry. TSA workers rallied in airports in Sacramento, California, and Baltimore, Maryland, Wednesday, warning that the shutdown is threatening aviation security. Hundreds more around the country have been calling in sick, with the agency reporting more than 6 percent unscheduled absences in what some are calling a “blue flu” protest ...

My biggest response to that is to go from 20—I mean, excuse me, from 1981 to 2018, when we saw a wave of strikes around the country, teachers’ strikes. And as I mentioned, those were, in most cases, illegal strikes. And people did it anyway. And that inspired, or helped inspire, other forms of labor militancy. You know, when people see that someone stands up to gross injustice and insulting behavior, then that person is empowered to stand up, too.

BARBARA EHRENREICH: Oh, God, no, I can’t explain that. But, you know, it was like some desperate effort to shift the blame. You know, he’s always blaming the Democrats for the shutdown, and here he made a stupid bid to blame the workers themselves for the shutdown.

So, you know, I’m saying: Why not just call it a strike? You’re not being paid anyway. And maybe you will come out of this with greater power over the conditions of your work.

AMY GOODMAN: I wanted to turn to the Dallas airport, to the federal workers protesting outside Dallas/Fort Worth International Airport. This is Sarah Fry speaking to CBS.

SARAH FRY: That it’s your neighbors. Your neighbors are the ones having this anxiety, having this stress. … We just bought a new house in June, and I’ve been aggressively paying down my student loans. And I expected to have a paycheck. I planned on working all through the holidays. And it’s really tough, and it’s really stressful.

If Pelosi caves to Trump, he will have nullified the election; if a primary goal is to shrink the gov't, a secondary one is to reinforce a semi-dictatorship, the Republicans, their donors, the base (working class white supremacists evangelicals) have been aiming at since the 1970s. Through persistent egregious gerrymandering, now through voter suppression, a huge swathe of the US is represented by a powerful reactionary minority who have taken control and mean to keep power. If in a state a democratic governor wins, the republicans pass laws to strip him or her of power (Kansas, Kentucky and other places).  They pass laws saying you cannot take these cases to court (North Carolina). So now the democrats took the house and the republicans have devised a ploy where they are rendering them powerless -- just throw a wrench in the whole works; if the democrats want to pull the wrench, they have to give up the power of the purse. Congress has already given up the power of deciding whether and how to go to war.