Never ask for whom the bell tolls, it tolls for thee

I've thought of another version of Niemoller's famous verses:

First they came for the socialists, and I did not speak out—because I was not a socialist.

Then they came for the Jews, and I did not speak out—because I was not a Jew.

Then they came for me—and there was no one left to speak for me.

These seem more narrowly a propos to Trump and his regime's gov't shutdown: The whole passage from John Donner's Sermons upon emergent occasions.

No man is an island, entire of itself; every man is a piece of the continent, a part of the main; if a clod be washed away by the sea, Europe is the less, as well as if a promontory were, as well as if a manor of thy friend's or of thine own were; any man's death diminishes me, because I am involved in mankind, and therefore never send to know for whom the bell tolls; it tolls for thee.

Each week I have an important article to share well here is this week's: from the New York Times: don't stop reading until you get to the article's end -- by Russ Buettner and Maggie Hagerman:

Mr. Trump recently retweeted an article, attributed to an anonymous senior official in his administration, arguing that 80 percent of federal workers do “nothing of external value” and that “furloughed employees should find other work, never return and not be paid.”
“If you don’t care what the collateral damage you create is, then you have a potential advantage,” he [Art of the Deal ghosts writer] said. “He used a hammer, deceit, relentlessness and an absence of conscience as a formula for getting what he wanted.”
I have been told that no one is thinking of the 800,000 plus federal workers originally furloughed without pay or forced to work without pay, to which more agencies and groups of federal employees have since been added, some without pay, or groups favored by Trump with pay. When so many millions are involved one way or another, can this be really true? I read this morning that gov't websites are going down all over the US, one by one, and many still there are no longer covered by security arrangements. By  the time of 2020 say a democrat gets in, the gov't will be in shambles -- considering all the unfilled appts. This opening of some, of paying only some that you open (quite inconsistently is the word "essential" defined) is the worst sort of bookkeeping; now while the analogy of individual finances doesn't work for gov't the idea of a general budget I think does -- at least you should know what's happening. Does anyone?

Who will be able to put Humpty Dumpty back together again? is this the republican hope that no one will, and it will take another 200 years to get back to where we were when Obama's term ended?

I feel astonished that a pair of men (Trump and McConnell) can hold back millions of dollars from millions of people -- how can this be? It seems to me for the first time all the history I've read over the years about absolute monarchs and tyrants had passed me over and I am grasping how and what this means for the first time. I wish I had remained ignorant. I'm sort of ashamed to think I didn't apply to myself and this US gov't what happened to the Chilean people after Allende was murdered: only a few people really commandeered the slaughter and destruction of tens of thousands of lives. Now I do. It's like the first time I read Fanny Kemble's concluding two chapters on her life on a plantation in South Carolina (1839-40) where her husband treated slaves horrifically brutally: until then I had never considered what such men could and would do to enslaved women.

If Pelosi caves to Trump, he will have nullified the election; if a primary goal is to shrink the gov't, a secondary one is to reinforce a semi-dictatorship, the Republicans, their donors, the base (working class white supremacists evangelicals) have been aiming at since the 1970s. Through persistent egregious gerrymandering, now through voter suppression, a huge swathe of the US is represented by a powerful reactionary minority who have taken control and mean to keep power. If in a state a democratic governor wins, the republicans pass laws to strip him or her of power (Kansas, Kentucky and other places). They pass laws saying you cannot take these cases to court (North Carolina). So now the democrats took the house and the republicans have devised a ploy where they are rendering them powerless -- just throw a wrench in the whole works; if the democrats want to pull the wrench, they have to give up the power of the purse. Congress has already given up the power of deciding whether and how to go to war.

So Trump offers a false new alternative Saturday after the marches -- or during. The same 5.7 billion for a wall, now a promise not to bother DACA people for 3 years. What are his promises worth. What's needed is a path to citizenship.

There were Women's Marches around the world on Saturday.  Berlin, London, New York, DC. Europe. 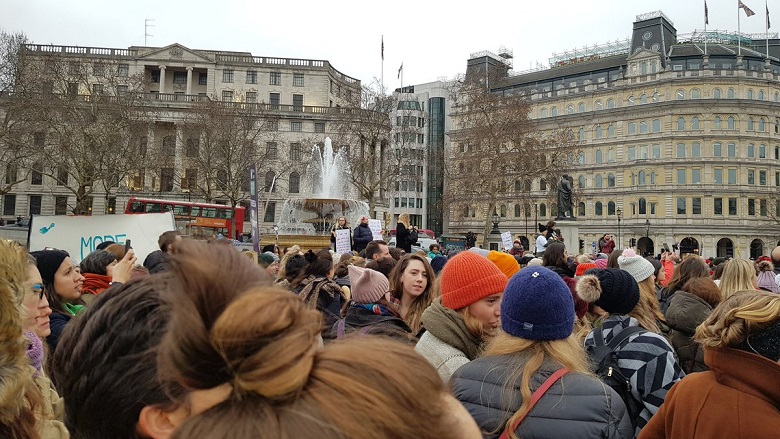