Why will there be not be another referendum over Brexit; Teresa May's fate

This is especially meant for US people who get little news, much less accurate or informative about what Brexit is like on the ground, walking through the grassroots (as people with no power are called). It's from a friend who lives in the Republic of Ireland: We might ask oursevles, why not another referendum, this time one so much better informed than the last, and with so many more voting, we ask. I also include stories about the literature published for the bigoted hateful Brexiers and a story of their threatened and executed violence:

I said to him in an email letter:

It looks like Theresa May has no conscience and she will just let the UK crash out of the EU -- by which I mean she could hold another referendum if she had courage and conscience - her stone face below. 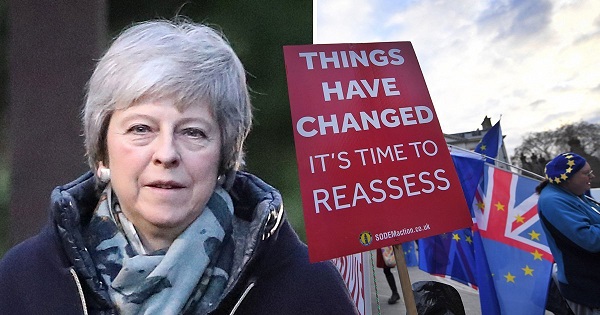 To which he replied:

"The British House of Commons is utterly undecided.  Each of the major parties is split into two or three camps and the Commons cannot decide on _any_ course of action.  There is now a 55% plus group in UK who don't want Brexit; this is said  to be also the general view in the Commons, but they have all talked themselves into the position that "the referendum expressed the voice of the people" and to do anything else "would be a negation of democracy".  They have even extended this to mean that a second referendum would also be a negation of democracy, forgetting that the fist referendum was on a question simply to go or stay, as if this was simply a matter of leaving a club - you don't pay your subscription and walk away.  Any second referendum would be better informed, except that the Brexiteers are better manipulators of false information and would shout down any facts.

They are also seriously concerned that a second referendum, or a general election if one occurred, would devastate the British political scene - none of the seats could be relied upon to maintain their usual political colour, so no one can predict the outcome, in the sense that in an election one knows that of the 650 seats there will be roughly equal quantities of Labour and Tory, with a sprinkling of Independents.  If they now had an election they cannot see the usual political equilibrium being maintained, and they are scared of one.

Also, now starting to be publicised in the papers and spoken publicly what was previously mentioned only in whispers, is that any delay, any referendum, a general election, even an "unsatisfactory" Brexit ("unsatisfactory" varying according to where one stood on Brexit or Remain) is very likely to give civil unrest - police departments have all had riot squads in training, ditto military.  Some of the popular newspapers (the English nationalist press, such as Daily Mail, Daily Express, Sun and others) have suggested that failure to approve the "Deal" is justification for insurrection.

Members of Parliament have been publicly advised by House of Commons security detail to take taxis home, not to travel alone, and other sensible security precautions.

Personally, if I were May, I'd write a withdrawal of the Brexit letter to the EU, send it off privately; then, when it had been delivered, go to the Palace and ask for a General Election to be called and be driven at high speed to a waiting airplane and go and sit in the sun for some years.  The convention in UK is that an incoming government is _not_ bound by any undertakings of the outgoing government; however, they have elevated the referendum from "an expression of desire" into "a statement of intent" and turned it into holy writ.  They need something like a long lingering illness of the Queen, on which all can centre, to distract them, give a breathing space, and then allow a reconsideration. "

May hangs in there until the Brexit happens, and then she will be shoved aside.

I'll add the fear of violence: the Brexiters are made from the same cloth as Trump's working class base:  The Guardian summed up the explicit demand that all empathy and normal human feelings for other people be repressed in the literature of this Nazi-like movement:  No need to burn intelligent, humane, informed books when the establishment which also gave us austerity, neollberal destruction of social opportunities, housing, transportation, also prints lots of this vile material.  What the elite Tories are hoping for is an opportunity to destroy all regulations that get in the way of their cutting compensataion for employees and making millions from destroying companies

The Southern Poverty Law center has equivalent stories (real news) of behavior of the Trump working class base: he promised the people in West Virginia, they'd keep and get more coal jobs. Nothing like that; instead GMU and Seas lays off millions and pays their executives sweet-heart retirement bonuses.  Meanwhile Trump cuts off heathcare for the elderly in the spreading requirement that the ancient work.
One reason for the suicide of a few now of those who survived the massacre at Parkland is they have realized, after being ignored, then jeered at, that a segment of the US population is glad of these massacres, glad to see intimidation and killing. It's similar to the shock of those taken to extermination and concentration camps, made hostage or treated to torture of various sorts in US prisons. It's hard to carry on with any trust, any hope in humanity. You become like Gloucester in Shakespeare's Lear.