To those who read this blog by coming here, or because I link it to face-book, twitter, or listserv communities I'm on: I'm off on another time away; a second time to Cornwall. I still have not given up on writing a book on Winston Graham and his Poldark novels, and even have a title: A Matter of Genre. I liked Cornwall the last time I went (later one summer two years after Jim died) and Road Scholar goes to very different places there and I know from previous experience, I'll learn a lot. Thus far they have been pleasant, safe experiences, and this time a friend I made last time will be taking the same journey with me.

So what shall I say here for the last time for at least three weeks -- by the time I settle back in and am at peace again, it'll be three weeks. I find it important that the other night Judy Woodruff actually looked distressed. I cannot know why and it might be that she had just heard upsetting news about a friend or member of her family she cares about, but I felt it was the result of the news show she had just curated (in effect). She is usually so controlled, I asked myself was this the cumulative effect of just weeks of this regime or that night. I cannot say. 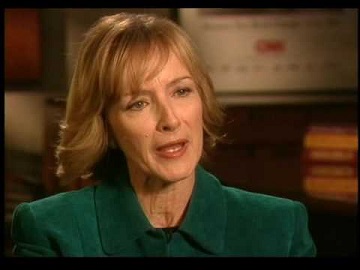 This is labeled TV in American: an Autobiography - -she has been on TV as a reporter since the 1970s

Perhaps the cumulative effect: Trump is now trying to run the US federal gov't and through his powers across it as a dictatorship. He has decided with the present attorney general, Barr, and other corrupt flunkies and murderous monsters (Elliot Abrams [particularly evil man, involved in death squads in the 1980s], Pompeo, Bolton] and the courts now loaded with partisan reactionaries, he can get away with this. He will just ignore congress. He will obey no subpeonas and has ordered his subordinates to ignore these (especially McGrath), give no information whatever is asked. When he lost the budget fight, and congress refused to give him billions for a counterproductive symbolic wall, he went to the defense agency, and ordered them to give him the money. He is having this attorney general go to court to declare ACA unconstitutional and thus throw 33 million people at least off medical insurance. It's not enough that he has gutted the funding of ACA and the courts and his phony EPA are allowing drug companies to charge unpayable horrifying amounts for desperately needed medicine (epclusa which I used to get rid of hepatitis C cost the taxpayer a cool $38,000 for 3 bottles) and companies like Monsanto to pour carcinogens across the countryside.

A typical story of working conditions and pay today: Uber and Lyft.

He is lawless, attempting a lawless dictatorship. That night she had had Jerry Nadler on the PBS reports saying he had no choice but to hold Barr in contempt of court, and yes he had faith that finally in the courts, the judges would have the conscience to back him and compell Barr to come to the congress. She got beyond the punishment of a big fine, and they did touch on two different branches of gov't sending two different marshalls with guns, one to put someone in prison and the other to stop this.  Note some of the corporate supports the idea this is a political game (e.., The Wall Street Journal is one). In the case of the symbolism of these sports teams, now many of the white people in the Red Sox are going shamelessly to the white house, while the blacks stay away. I say that anyone who turns up to that place in such circumstances allows him or herself to be counted as a racist, and utterly indifferent to humanity, but there they are, going there, photographed as if this is honorable. Mrs Trump has told her by her jacket that she doesn't care and no one cares -- it seems not enough do who have the power to do something.

The human effect of this man is devastating millions of people. Right now his seething bigotry has destroyed thousands of lives literally (death) and by slow time in Puerto Rico and he is determined to and succeeding in making the island a wasteland.  His greed and love of violence is now starving out and turning the lights over millions in Venezuela; he has tried coups but his group of thugs is apparently too incompetent and unpopular there. He is bullying every country in the world by his stranglehold on banks to stop having any trade or reciprocal agreements with Iran, with threats of retaliation. Of course he vetoed congress's passed demand the war we are enabling Yemen (carried on by the Saudis) to stop. 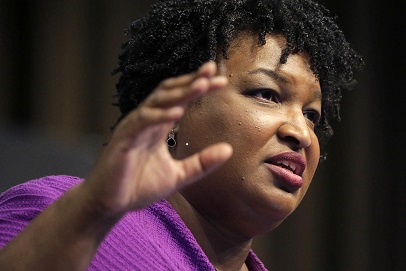 We will elect him out, you say? that gets me to my most important story this week: voter suppression, gerrymandering, and cheating with no courts to stop this is working. In Georgia Stacey Abrams lost by a sliver of people according the public formula produced by these methods. Who doubts that she really won? Well the false governor and the women-haters have now passed a bill whereby the minute a highly sophisicated machine can detect a sound that is declared a heartbeat, any abortion is illegal. This happens well before a woman might know she is pregnant. If she crosses state lines to have an abortion, she is declared a criminal and will be subject to exradiction back and a 10 year prison sentence. The analogy with the Dred Scott decision that an enslaved person must be dragged back into enslavement once he or she has escaped by anyone who knows this is clear.

If he loses the 2020 election, will he get out? He will have done much of the damage he set out to do: gov't agencies are emptied of employees. But now he is at risk himself of going to jail as his own fraudulent behavior over several decades has been made more or less public.

People want hope: why you should back Sanders' and AOC's Loan Shark Prevention Act: cap interest rates, and re-launch the Postal Savings Bank

Capping credit card interest rates at 15%, which the Fed may increase if needed for a period of 18 months to preserve the safety and soundness of banks

Relaunching the Post Office Bank, which would offer basic services, such as checking and savings accounts as well as loans

The title of the bill is a well-deserved poke in the eye to the financial services industry. While a Post Office Bank has been presented as a solution both to payday lenders as well as the high level of “unbanked” individuals, it can also be taken as a criticism of the credit card industry.

And it’s hardly radical to propose a credit card interest rate cap. None other than that great American socialist, Republican senator Al D’Amato, did so in 1990

People need joy: On PBS, William Branham had a comforting and desolating visit with film series on Antartica and the state of penguins -- two species going extinct and one surviving:https://www.pbs.org/newshour/press-releases/four-part-pbs-newshour-series-warnings-from-antarctica-to-debut-in-april-2019

I watched it and it's very good, touching. 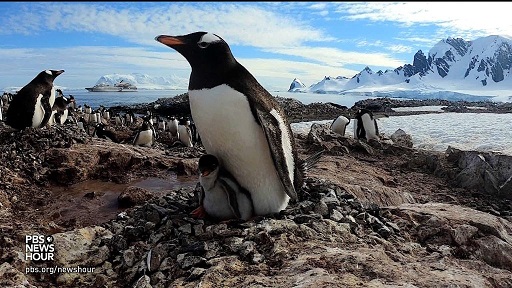 If you are a member of PBS (I'm a member of WETA) you can probably watch the series on one of their websites.