US (Trump) may be trying to begin a war w/Iran, Ecuador gov't imprisons a man w/or charges or bail

My husband, Jim, used to say one cannot tell what is the important story for this week or month or even this year until after much more time has gone by.  Someone, I believe in the early 20th century, said we cannot opine on the significance or results of the French revolution as yet. But human life is short and 4/5s of mine is over.

So I must choose and write again (three weeks after the WW1 espionage act is about to be used to imprison and silence Assange for the rest of his life) to say that it appears that the US (gov't under Trump, which means Bolton, Pompeo, Richardson and all those who will obey them) may be seeking to create an excuse to go to war with Iran. If this does not happen, it's because no one but the US wants a war with Iran -- no one in the region (excluding maybe Saudi Arabia and Netanyahu's Israeli gov't).

Trump and Co have thus far failed to effect a coup in Venezuela, but this is a greater danger as Iran is an old, powerful real nation (not the result of lines drawn by the colonialist winner of WW1) with strong natural resources and a trading marketplace others want to engage with (though at the cost of US sanctions they hesitate ... ) 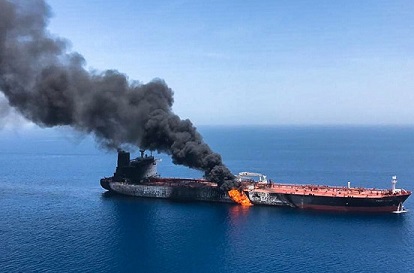 The only news outlet to explain precisely what is said to have happened in the Gulf of Hormuz, and how this probably excludes Iran as an actor in the attack on Japanese and Norwegian tankers is DemocracyNow.org.   Judy Woodruff and the PBS team accepted the idea that it was probably Iran -- without any evidence. The evidence suggests the hit came from the air, and that Iran's involvement was as a group of people trying to rescue those in danger of losing their lives.

Do read the transcript: some excerpts: Vijah Prasad:

"People who look closely at the oil business understand that 50% of the world’s oil goes through the Gulf of Hormuz. They understand that, you know, carrying oil is a dangerous activity. All kinds of things happen. There are accidents. There’s piracy. There are a series of quite common risks faced by oil tankers. Iran is not one of those high on the list as far as risk assessors are concerned. And yet, of course, this is the first thing the United States government has said, as you said, without any evidence. So, within a few hours and without any evidence, the United States government once more provoking some sort of response from Iran, perhaps, or at least to try to galvanize public opinion to believe that Iran is a threat to the world.

What’s really important here is, yes, the fact that Shinzo Abe, the first Japanese prime minister to visit Iran in 41 years, he goes to Iran shortly after the Iranian foreign minister visited him in Japan. In fact, Mr. Zarif visited Shinzo Abe in his home. They had a very important conversation, where Shinzo Abe said that the Iranian nuclear deal is a factor of stability for West Asia. You know, this goes directly opposed to the Trump administration’s view. And what’s very important here is we’re not talking about a country that’s far from the American orbit. This is Japan, a reliable ally of the United States, which is not only reliant upon Iranian oil but understands that the warmongering in West Asia is going to be very bad, not only for Eurasia, but for the world. And I think we need to understand that as Shinzo Abe is in Japan [sic], this attack or this, you know, sabotage, or whatever it is—

It’s not only Japan saying this, Amy; it’s also the Europeans. The Europeans are very keen that the U.S. not break fully from this Iran deal. The Germans, in fact, have been looking for an alternative mechanism for payments. You know, India, which was one of the largest purchasers of Iranian oil, had to back off because of these new, very tight sanctions put in place by the U.S. government. But the Indians are also not that interested in this new approach by the Trump administration. They would like to continue to buy oil.

In fact, it’s a kind of isolation that the United States is facing ... "

There is a second story I want to call attention to, also reported by DemocracyNow.org and (this time) other outlets and media: it seems that "shortly before the Ecuadorean government handed over Julian Assange to the British police, the International Monetary Fund provided Ecuador with a loan of $4.2 billion, and there was also a commercial package of about $6 billion, so a total of $10 billion was transferred to the Ecuadorean government by the auspices of the IMF." So Lenin Moreno took a bribe?

I focused on Assange three weeks ago; tonight I focus on Ola Bini, jailed without bail and without charges on the same day (April 11th) that Assange was taken from the embassy and put in a British prison. 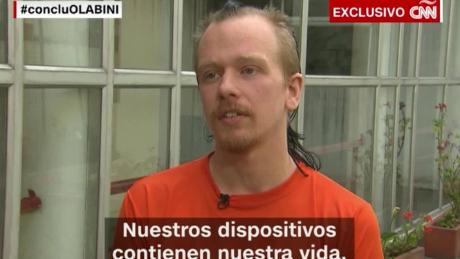 "Ola Bini is a programmer who spent most of his life trying to create tools to help human rights activists create a shield against surveillance by governments. People who are in the tech world might know the programs called the Tor Browser or Enigmail. These things were developed by Ola. He moved to Ecuador partly because he felt that with the government of Rafael Correa, it would be a good place to do the kind of work he was doing—precisely the opposite of what people are alleging of him, that he broke into this, that and the other government materials. In fact, the opposite: He would create shields to prevent governments from breaking into the kind of databases held by human rights defenders. You’ve got to remember that in the Snowden—Edward Snowden’s revelations, he said that the NSA had been routinely attacking the servers of human rights and other civil society organizations. It was precisely Ola’s mission in life to protect those organizations.

He was picked up on April 11th at Quito airport, while he was on his way to an advertised martial arts training course in Japan. He’s been held in prison for two months. There have been two hearings. No bail has been allowed. And no charge has been put forward. The prosecution in Ecuador has made it seem like a sinister thing that Ola has many computers and Zip drives and so on. You know, when I travel to places, I carry about 10 to 12 Zip drives. That’s because I keep a Zip drive for each story. It’s got nothing in it to seem to be something, you know, sinister or bizarre. These are things that software developers have. They tried to make him seem like a sinister character.

I was even told by another reporter that people were asking if Ola was the code cracker for Julian Assange, which he of course was not, and could not have been the code cracker at all when the materials passed on by Chelsea Manning came to the WikiLeaks organization. You know, that was one of the allegations that was floating around, not put on paper. Ola only met Julian when he was already in the Ecuadorean Embassy, long after the revelations of—very important, crucial revelations that came from Chelsea Manning, also now in prison ... ".

I hope no one needs to have explained to him or her why it is crucial for the safety of everyone of us indivdually that gov'ts be required to produce charges, cause (habeas corpus) for someone to be imprisoned, that the charges be spelled out at a minimum.