Small or individual stories tell us what life is becoming like for people living inside the boundaries of the US where there are no sanctuary cities or states. So for this week's blog I send along variations on the theme of kidnapping, snatching up people, dividing them from their children, and then treating them in prison abominably. Back to the 1950s when ruthless people outside gov't began to prey on the vulnerable too.

The important thing to keep one's eye on is how abused people become targets for predators, and that if all of this is engendered by Trump: his adminstration, his vicious tweets, it is permitted and thus endorsed by Republicans, what's called his "base" (some tens of millions of people who voted for him) and the very wealthy plus those now complacent and complicit. 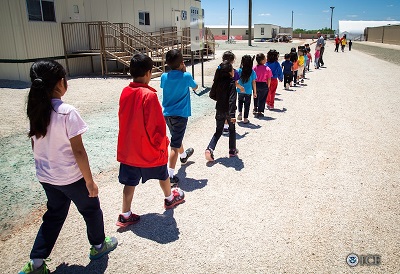 This story tells of how ICE operates to discover hispanic or muslim people, get warrants or not to search their houses, arrest or kidnap them, and then haul them away to privately-owned prisons (concentration camps is the accurate term) anywhere in the US.

ICE steps up ruses and surveillance

In this reports the police and ICE and drug enforcement work to find where ethnic groups are living, any houses changing hands, send out notices that they are coming not to take away non-native white Americans, but to clear the neighbor hood of drugs:

Then the police and alll other enforcement officals call "come out with your hands up!" (they say this) and arrest and take people away. I wonder if blackmailing goes on, where people threaten one another by demanding a bribe. Houses are emptied out and squatters and drug addicts and sellers do then come in sometimes.

The New York Times suggests there is much bluster and "little" people removal. But the spreading of fear and anxiety turning people into submissive guilty people when they have done no crime -- the law used to allow genuine refuges from brutality the right to enter. 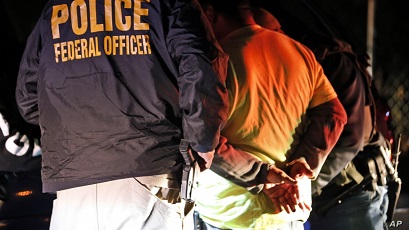 This is the back-drop to Trump's campaign of open  racist vilification of the four Congresswomen of color and now Elijah Cummings, a long time black congressmen and his Baltimore District.  And the democratic congress does nothing to impeach this man.

Among the more demoralizing moments for me this week: twice a woman I was with expressed a back-wards justification, even approval of what Trump is doing Both white women in their 70s. One said "I am so conflicted" over immigrants coming in -- there are no jobs for them, said she. She refused to answer my query on how she felt about separating families, children in prisons. The other waxed far more indignant over the thought she had that democrats want "open borders!'  and how insane and extremist that is.Not how insane and ruthless is ICE: I said months ago I agreed with democrats who anted to close down ICE (attracts thug types) a few months ago, and she was horrified by this demand. No we must have them.

This morning I read of two other communities where this is happening.

Personal story from 1950s:  My father took my mother on a lovely honeymoon to a camp in Connecticut. Years later --1950s-- she "discovers" it was run by communists. As in Italy, they used to do community stuff to be part of their society. My mother knew; of course she did So people in his office going after one another to try to take their jobs -- or if they didn't like them. My father cited. He changes all his subscriptions. Lives in fear, has himself transferred to terrible temporary job on New jersey - -had to get up very early. And what does she do. Berates him ferociously for taking her to communist camp. I used to have those photos. They looked happy. he said to her: "you have now ruined one of the rare good times we ever had."  My first husband destroyed that photo album, which I forgot to take with me when I fled. Yes she was afraid -- but she showed that she would not be loyal to him at all. Darkness at noon in banal worlds.

France in the later 1940s and '50 was a veritable culture of predatory betrayals ....

Fast forward 20 years:  Jim and I living a married couple in NYC: Some decision in 1978 worried my husband, a British citizen with a green card so he became a US citizen. He would read whole supreme court decisions and the way the justices then were thinking troubled him.  He didn't go into what it was that so worried him. He was not a native citizen and even if white, vulnerable ... as in these people preying on these people: when the Japanese were taken to Internment camps their property was stolen from them;