I've returned to finding (a friend found this) important articles for my reader to read: after this weekend, you must read White Genocide Conspiracy Theory

Crazy? fantastic? as unbelievable as the US gov't opening private prisons and treating the people in them as if they were in concentration camps, letting young children sleep on cement floors, feeding them junk food and kool-aid, punishing them if they protest and letting these people die for lack of any decent accommodation, housing and medicine?  hundreds and thousands of people.

Let's step back a bit to see the whole picture which this weekend's two massacres were epitomizing and telling moments. What we need to do is connect up ordinary daily pictures and events with these massacres and the actual legislation passed by the Republican or refused to allow to come to the floor of the senate, or vetoed by Trump or after struggles where the decent socially good legislation is passed it's nullilfied by decisions of the courts and the inactivity of agencies supposed to implement them.

We are talking of daily, weekly monthly, yearly massacres: a continual and tremendous threat to us all, about which nothing is done. What is cried out for is gun and bullet control. 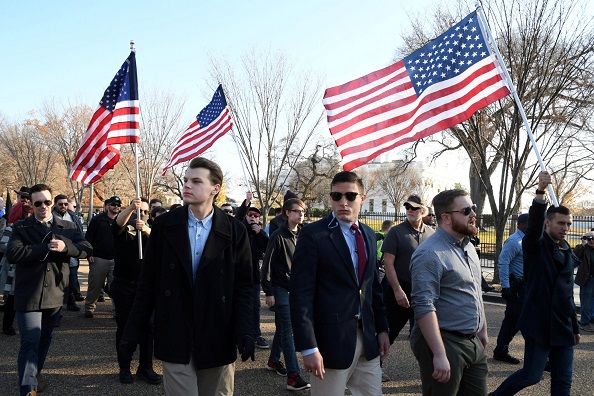 A white nationalist rally -- all male

For quite some time now I have felt that far from being indifferent to the loss of life, maiming and wretched misery inflicted on the now thousands of victims slaughtered, crippled, bereft of crucial people in their life, the new Republican party and Trump cooperate with them. Most of the time, their rhetoric disguises their complicity and support. Trump is rare for saying the murderers are "fine people" - and even he only looks openly with favor on male white supremacists when they form open hate groups. It seems in public one needs an explicit set of words beyond the obvious lack of action and pretense of caring. One cannot get any gun control legislation passed because no or few Repubilcans will vote with the majority of democrats to pass it. This despite something like 87% of all Americans wanting this.

Once in a while the hostility to those murdered emerges: when the private high school in Florida was attacked and the high school students not used to being targets, in their horror and astonishment, protested vehemently and actually went about to urge gun control legislation, went to the congress to demand minimal safety (say gun control background checks), they were sneered at and vilified. This was possible because the new Republican party and Trump recognized that these kids could be identified as part of the white elite. The Republicans were not a  bit upset by what happened. They greww angry when these survivors complained and demanded gun control  because they are the children of respected segmants of society who expect the police and their gov't agencies to protect them.

Here the function of these massacres was seen. They are forms of domestic terrorism which serve the purposes of the Republican party to terrorize the ordinary citizen or person living in the US. Only once in a while (and this weekend was such an occasion) do the gov't authorities call what happened domestic terrorism. A white man known on line as a white supremacist, part of online rhetoric and groups who spew out hatred of non-white people traveled hundreds of miles to El Paso where he knew large numbers of hispanic people. He brought war weaponry able to kill hundreds quickly. Two incidents occurred together so that within 24 hours white males were seen to have deliberately gone where they could kill as many African-Americans and hispanic people in a short time as possible.

And finally the New York Times wrote openly about what this is about:  The Right way to understand White Nationalist Terrorism.

Like a number of recent mass shootings, the one in El Paso on Saturday came with a manifesto. While authorities are still working to verify that this document explicitly was indeed written by the attacker, the evidence seems clear: It was posted to 8Chan minutes before the attack, by someone with the same name.

By manifesto, I mean a document laying out political and ideological reasons for the violence and connecting it to other acts of violence. We’re familiar with those. We can recite them. And yet our society still lacks a fundamental understanding of the nature of this violence and what it means.

Too many people still think of these attacks as single events, rather than interconnected actions carried out by domestic terrorists. We spend too much ink dividing them into anti-immigrant, racist, anti-Muslim or anti-Semitic attacks. True, they are these things. But they are also connected with one another through a broader white power ideology.

The El Paso manifesto, if it is verified, ties the attacker into the mainstream of the white power movement, which came together after the Vietnam War and united Klan, neo-Nazi, skinhead and other activists. That movement, comparable in size to the much better known John Birch Society, never faced a major prosecution or crackdown that hobbled its activity. As a result, it was able to sink deep roots into society, largely under the radar of most Americans

What you need to know to back this up is the reality that for decades while the FBI and CIA have done everything in their power to harass, hound, suppress and imprison and (at times) downright kill organizations of left parties (socialists, there are no open communists left in the US), black organizations especially, they hav left alone to grow white nationalist parties and armed groups and do nothing whatsoever to stop the proliferation of these groups on the Internet. Again a NYT editorial talked about how the FBI has been doing  nothing to infiltrate or stop these groups-- and contrasted that to the great effort to infiltrate, re-educate (I suppose that means torture), and wipe out Islamic extremist cells in this country. I think it also said that Congress refuses to fund studying the problem of white surpemacist domestic terrorismOnly recently have those who control the cyberware that hosts such sites started to take them down. As you can see from the New York Times language, the Times reporters have known about this for a long time. This is so well-known that there are wikipedia articles explaining a conspiracy Replacement Theory.

It states that with the complicity of "replacement" elites, the white French and European and American populartions are being replaces -- deliberately -- by non-European (non-white) peoples through mass migration, demographic growth and a drop in European birth rate. It's a conspiracy: you, I and others are planning, vote and work towards the puropose replacing white hegemony with non-white power whose purpose of course will be to destroy white culture and wealth. The wikipedia article cites Renaud Camus as a central political figure and "thinker."

What we have to connect up with this is larger ordinary daily political context: for example, the refusal of the Republicans and Trump to protect our elections, the extreme gerrymandering of elections so that a minority of white Republicans can win a state and take power when the majority of people voted democratic. One "weapon" democracies are supposed to have are the right to assemble, to demonstrate and to have a free press. Everything is done that can be to stop demonstrations, to demonize those demonstrating, and to punish those who show up not only by painful spraying, barely non-lethal guns but also imprisonment, charges of felony whose purpose is deny the people liberty, right to work, to vote, to live.

The crowding of reactionary judges in our courts is done so that there is no longer a separation of powers and the courts are allowing Trump and his allies to do what they please -- for example, after Trump lost an election, was unable to fund his wall even when Trump closed down the govt', he is now taking money from the military budget and a court said that was just fine. The purpose here is to stop any social legislation on behalf of the middle class and working class and poor to say fund public schools, pass a universal health care plan which enables all of us to access health, programs to rebuild our infrastructure and fund public transportation. This white conspiracy theory, its advocates and its gun-toting activists are useful in sustaining a far right-wing gov't. Trump's mythic history this past 4th of July is their narrative: militarist de-contextualized asocial history. 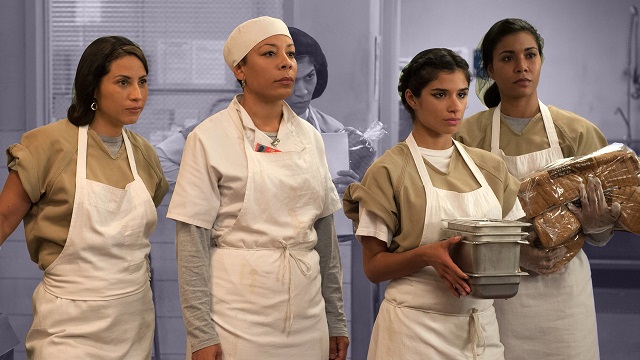 From Orange is the New Black: women prisoners, women workers -- based on a memoir of a woman about her time in prison

If we can find explanations on wikipedia, there are also TV programs, serial dramas that bring out into the discussably open or should what is happening: the latest is Orange is the new black. Again a friend wrote me about this set of films:

"the government has created a class of “Jews” in the undocumented immigrants—they are simply stripped of any rights a citizen in this country would have under the theory that since they are not legal citizens, they have have no rights. One might argue they do have basic human rights under international law—or should be granted the same rights as  American citizens if they are on American soil—but that is not being done. It’s really very scary when you put all the pieces together—not only does being an undocumented alien mean you are stripped of rights, felons are more and more stripped of rights—as soon as you create a class that can be treated as non-citizen, non-volk, you are, as Arendt points out, in the heart of the Nazi beast. It is worrisome: I can imagine as they already do (!) they will start arresting more and more people they don’t like on felony charges, face them with such horribly long sentences that they plea bargain into pleading guilty to lesser felonies and then are essentially stripped of citizen rights as felons. This could happen to any of us. And I have been reading again, as I have before, that the assault on women is a part of all this—the replacement theory conspiracists want to outlaw abortion (as is very close to happening) and then strip us of rights so that we are forced into endless childbearing (white women that is) so as to produce more whites."

No, it's happening right in front of us. Congressional and state legislation is in line with all this. Now we can turn to the criminalization of pregnant women, the assumption they want to kill a coming baby; the closing down and defunding of women's health care institutions like Planned Parenthood.

There's an agenda, it's being implement step-by-step. Another function of the massacres is to allow a race war to emerge: you do nothing to control guns, you set and step up attacks on immigrants, you snatch them from their communities (all non-white people are in danger, whether citizens or not from ICE). Trump's slogan meant make America white again. 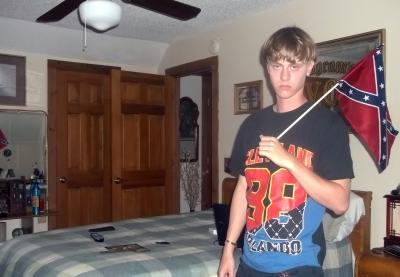 Do consider that instead of being regarded as a madman, Dylan Roof was allowed to conduct his own defense as if what he did was the act of a sane man. This tells us how far our society has come in accepting what is happening.

Try to persuade the next open Republican you see to the democratic point of view, show the parallels with the rise of Hitler and you find you are with someone strangely inoculated againsts information, common sense, reality. I've another friend whose son is a superintendent of schools and moves from one pro-Trump Republican Christian district to another ...  It's called "transactional" voting: they vote for this man because he will pass some specific law or enforce some custom their sense of their threatened identity craves.