Turning people into non-persons; depriving them of all rights: a UK program

It seems to me what is reported here is of vital importance for anyone who laws and customs in your gov't can easily render powerless, imprison (for minor infractions), deprive of mobility, the right to get a job ... 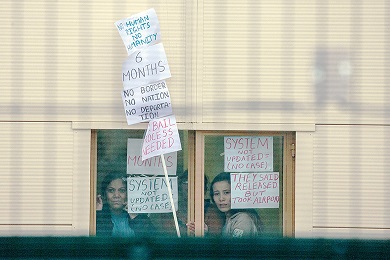 The preparation of living corpses by David Herd, from Times Literary Supplement, July 30, 2019

"In an interview with the Daily Telegraph in 2012, Theresa May announced the intention to use the Immigration Act of 2014 to create a “really hostile environment for illegal migration”. The 2016 Immigration Act further intensified that hostility, with its root-and-branch foreclosure on anything like a livable life. At the same time, however, as official hostility to those seeking asylum has intensified, so also the Home Office’s practices have become much more widely known and discussed in the media, though this can hardly yet be said to have altered Home Office behaviour. And seven years on from Theresa May’s announcement of the government’s intention we are still coming to terms with what the hostile environment has brought into effect.

The hostile environment, as the 2016 Immigration Act confirmed, is a sustained, systematic and brutal assault on every aspect of the life of the geopolitically vulnerable person. Denied the right to work for as long as their case is unresolved, which will frequently be for years and can easily be for well over a decade, a person seeking asylum finds their every movement compromised and controlled. As has been observed by Refugee Tales before, but which needs constant reiteration, such support as is afforded a person in that circumstance (at the subsistence level of £5.39 per day) is paid not in cash or into a bank account (which since the 2016 Immigration Act it has been illegal for a person seeking asylum to hold), but as a voucher in the form of a top-up card that can only be spent on designated products at designated shops. This renders even the act of securing basic provisions a hostile process since the voucher – like a badge – has to be displayed at the point of transaction. It also subjects human movement itself to the process of hostility, since public transport is not listed as an item on which the voucher might be spent. One effect of this is that a person will spend endless hours walking, either to secure basic provisions, or to sign at a Home Office Reporting Centre, or because in the absence of work there is precious little else to do.

What has become apparent, however, in the past five years, as right-wing narratives of nation have gained sway in parts of Europe and America, is that we have to heed Arendt’s warnings more closely and more urgently than we would have wanted to think. Thus, one thing Arendt was very careful to observe was how administrative hostility could give way to, or could prepare the ground for, further large-scale assaults on personhood. As she put it, “the methods by which individuals are adapted to these conditions, are transparent and logical”. Thus the insanity of the historical developments she was seeking to understand in Origins of Totalitarianism had its root, as she understood it, in administrative hostility, in the “historically and politically intelligible preparation of living corpses”.

Arendt’s history of totalitarianism was written in the form of a warning. Her aim was not to argue that one historical development follows straightforwardly or in any simple fashion from another, but that there are tendencies in politics by which we have to be alarmed. When recently, under the Salvini Decree, the Italian government bulldozed the Castelnuovo di Porto refugee reception centre just outside Rome, evicting hundreds of refugees, the authorities were acting on grounds Hannah Arendt would recognize. The people concerned had been rendered so politically vulnerable as to make them subject, eventually, to state-orchestrated violence. Understood historically, it is just such ground that UK policy-makers began to prepare when they instigated the hostile environment. The intention was to produce the conditions through which personhood itself could barely be sustained. The longer that environment exists the more we understand its implications. To detain a person indefinitely is to so fundamentally breach their human rights as to render them outside the provision of any ethical framework. In order to detain indefinitely, in other words, the state must already have taken the decision that this is a person to whom rights don’t apply. From which it follows that their personhood does not require respect. From which it follows that one can develop a comprehensively hostile space.

It is the prospect of such arbitrary detention that instils the fear that shapes a person’s relation to their everyday life. ..."