The Noose Tightens: at the DMV restricting our liberty of movement within the US

More than a week ago now I got a form letter from the DMV (Division of Motor Vehicles), telling me that in order to renew my driver's licence this time, I must go down to an office of theirs and have myself photographed. As I have renewed my driver's licence twice since I took the present photo on it, it is long out of date.  Maybe by as much as 20 years. Face recognition technology at the DMV today was the same in Alexandria, Va

But there was something else, and it was phrased ambiguously. If I wanted to turn my driver's licence into also a "real ID," and also wanted to fly domestically, I would have to produce 4 documents on the day I came in. These were evidence of my residential address, a birth certificate or passport, my social security card, and evidence of change of name. I have changed my name twice: first there was my maiden or birth name, then my first husband's name, mine for about 6-7 years, and then my late husband's name, which I've been using for some 50 years. For evidence of residential address I was at first stumped; then I thought of utility bills and brought in two; I brought in my last bank statement, then ferreted out my marriage certificate from Leeds (my second marriage), a frail document, which I proceeded to scan into my computer, lest it be taken away. I puzzled if I should bring my first marriage certicate and divorce papers, but felt surely that's too much. I did find an old social security card with my birth name on it (gotten at age 15). I couldn't find my birth certificate, and brought just my passport.

I asked Izzy, my younger daughter, if Trump had signed some kind of executive order trying to control people flying within the US; she went to her computer and said, no this comes from TSA (those harassment officials at the airports) in conjunction with the DMV, and ultimately from Home Security. Once you enter "their" (TSA) space at an airport, you lose many of your civil rights. And now the FBI and CIA are not enough outside airports.

I wonder if all this seems innocuous to others reading this. I asked a few friends had they gotten something like this, and learned this new requirement, with this implied risk of not being able to move around the US freely by airplane, has been set up by other states than Virginia. It's in Ohio. And I got stories of "heavy lifting" to renew a license in Virginia; a friend told me she had to bring her grand-daughter back three times before they could change the girl's driver's licence into a "real ID."  The girl's father lives in Les Vegas and she might want to take planes to travel.

The DMV looked like its ordinary self; long lines, all the people coming for documentation or out of need, very polite to the officials, clerks. Nothing new going on. Well what do I mean by nothing new ? for a long time the DMV has been an utterly autocratic place, inclined to suspend driver's licenses at will, almost. Public transportation (need I say) is poor in most of Virginia; without the "privilege" of driving, you cannot easily get to your job. Driving is not defined by law as a right. My license was suspended for some 5 months after I had a period of unconsiciousness, only a few seconds, but enough to get into an accident - I hurt no one but myself and my car. I was making slow left at a green light. The DMV would not believe the doctors (or seemed unwilling) that this was a temporary incident due to exhaustion and grief (after my husband's death). I had to pay a lawyer $395 per billable hour and she earned it by getting back my license; towards the end she was threatening to go to court and they unsuspended my license just before the date she proposed. Nowadays police have computer abilities to flash over a license plate and learn if the person driving has no license or a suspended one.  An invisible prison.

Some people came and went quickly; but others had more difficult business (buying a car, changing information about ownership). I did see four people while I was there turned away for lack of documentation for this real ID; all were told they can come back today with the requisite documents -- if they have them.

In the event, I did have no trouble. Indeed the bottleneck man (I have dubbed him), who mans the desk at the entrance, and everyone must pass by to get into the central room with chairs and a number (I waited about 45 minutes on a long meandering line), smiled at my number of documents, asking me if I had brought coffee too. (As a bribe?) 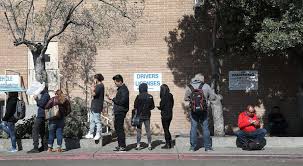 Though I got there an hour after the place opening in an attempt not to wait outside ... the experience is set up to make you wait outside. Beneath this particular photo you are told you have to pay $94 for the right to wait online; this reminds me of how when you buy tickets online or by phone today you are charged for buying of the ticket first wherever you are doing it, then the ticket price ....

My wait in the room was an hour and a half and I was worried about the form I was asked to fill out. Among the questions, was one about having a driver's license from another state or country. I was asked for the number of that driver's license, and the year I got it and the expiration date.  I have no copy that I know of of that old driver's license; all I remember is I got it in 1976 in New York State (after passing a driver's test driving and filling out a test form), and switched to Virginia in 1980 where I had the easiest of tests on a computer and voila a new license. I wrote the general years. I was also asked about the suspension of my license; a tiny box was provided for me to explain. I tried to in two sentences. 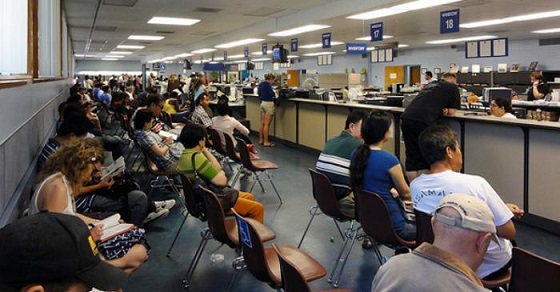 This scene from Santa Monica could have be Alexandria today

My number was called and I went to the counter and clerk.  The young woman looked at me, and when I said I was there because I had this form (I produced) asking me to have my photo done to renew license; and, if I wanted to fly domestically too, bring these four sets of documents. She never answered the implied question about flying domestically: instead it was, "Did I want a "real ID."  I said yes. She then swiftly went through my documents, picked out all she needed, handed the rest back. The truly important one was my passport. With that and my social security card, I didn't need the driver's license. My utility bills were enough for proof of residence. She looked at the form and where it said 1976 muttered something about too many years ago and hardly read the suspension section.

But then I was asked to answer a set of questions on a computer; three sets rapidly, click yes or no. There were two that bothered me, and I didn't have time to think about. They asked me did I give permission for voter registration to compare my name (it was a phrase which meant that) on this ID with the name they had in their files. I didn't like saying yes. There was a second question tending the same way. If I had clicked no, I would not have been able to get this wonderful "real ID:" there was no lawyer to consult. The young woman would not have answered such a question.  After this set of questions, she took my photograph (using facial recognition tech), using the computer again, I passed a very easy eye test, and then paid $42.00

My new combined "real ID" and driver's license will be mailed to me in 8-10 business days. "Give it two weeks at least" she said. Meanwhile my present license is fine -- it's not expired until my birthday this November.

Gentle reader if you live inside the US, what I have written here should worry you. There are several places where I could have been denied a driver's license or at least "real ID." I know for decades through the passport mechanism, many people have been stopped from mobility: Paul Robeson is a famous case where he was refused a passport, and inside the US he could not get a job. But notice how much more general the refusal is. This driver's license ID is narrow, specific, confers a specific ability to drive and/or to travel by airplane, and therefore is potentially limit on our liberty to move about within the US. When I signed these things I am implicitly agreeing to this limitation. I know from NYC lawyers over tenants' rights, that the contract landlords sometimes insist one sign don't hold up in court, because you are in a coercive situation. Still.

I am bothered because each time I have asked someone, they have told me yes they are aware of this, and yet they never spoke of it before. I am bothered because no where in our newspapers is this tightening noose described. Everyone should know about it in a state affected and I suppose they do when their license comes up for renewal.  This is stealth dictatorship. Our right to assembly (people gathered up and imprisoned because they don't have a permit), to a free press, to free speech (one can be accused of terrorism) are all being corroded away. We know about what happens at airports, and many may think about international flight first.  We know what is happening at the invented borders; the ignoring of laws allowing people to seek asylum, the obstacles now put in the way of green cards, VISAs, the imprisoning without trial of refugees, immigrants, the depraved Us gov't behavior towards their children, the imprisoning and accusing of treason of anyone attempting to help these people in any way..

So now our liberty of movement outside that airport is at risk.