Decades of Fire: The deliberate burning down of the south Bronx 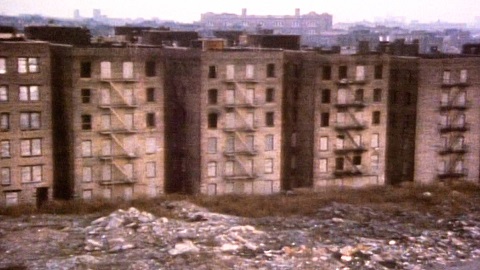 Last night PBS aired an hour-long documentary on the decades (it did not happen just in a single of decade) of burnings of buildings that devastated a huge swathe of the south Bronx and displaced almost a quarter of a million people.  In Amy Goodman's summary:  "Co-directors and producers Vivian Vázquez Irizarry and Gretchen Hildebran tell the story of the government mismanagement, landlord corruption and redlining that lit the Bronx ablaze. They also describe how the community fought back to save their neighborhoods," and she included a discussion with one of the film-makers and the trailer for the film:

While I have told of my own adventures in our politicized world (a police man behaving utterly irrationally and dangerously when he pulled my car over for passing a stop sign; at the DMA semi-coerced into turning my driver's license into a "real" ID card, complete with a photo of me using facial recognition technology), I've never set myself in a particular social and economic context, a place. I grew up in the southeast Bronx between the ages of 4 and 10, the years 1950-1957/8; my relatives lived there, and my father continued to visit his mother and go to Crotona park regularly for another 15 and more years. 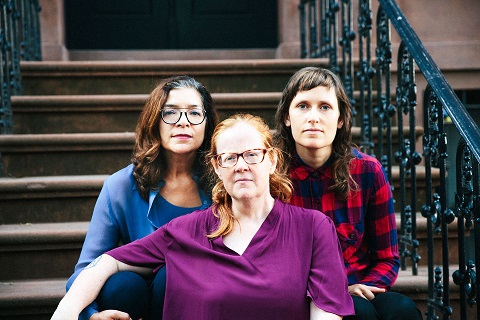 The co-directors and producer

So here is my reply to this hour-long program: First briefly, I am not sure what year the burning down began but not long after we let.
The buildings were burned down by the landlords to get the insurance.  Alas, this was only stated in passing by someone in the trailer shown on DemocracyNow.org. What also was happening was when someone would move out, the landlord would try not to re-rent and so the apartment would fall empty.  No care was taken by the city or any local authority to make sure that the buildings were safe and tenants began to take away and steal the innards of the buildings for money.  Pipes, electrical lines; when a building began to be stripped bare, everyone else would leave. Time to set fire to the place.  My father joked, "The Bronx is going to the dogs."
My parents lived in a two bedroom apartment over a bar, on a corner part of a building.  Charlotte Street has some resonance as a name; President Carter came and asked, "what happened here as if it were a mystery." The street led to PS 60 on Charlotte and Boston Road.

And then as I watched:
I put the TV at 10 and watched patiently for the hour. FWIW, as I said, my parents and I left around 1958/9 or so, we left before the major fires began. I had an uncle, aunt and cousin who lived next door and left about 1961, another an aunt, uncle and cousins who stayed until 1963/4 or so. These were my father's family and he kept visiting regularly (almost once a week) until his mother left -- she went to live in a house the family had built in Long Island (Riverhead). I sometimes came. When she was gone, he kept going to Crotona Park (very large and once beautitul park) where he had male friends who went to the handball courts. He was there around the time Carter arrived and a small program to rehabilitate the very blocks we had llved on was set up: those few blocks (Charlotte Street is the street we lived on and it is the street Carter chose to have himself photographed on). Reagon did visit and did a foul thing -- came precisely to deny that anything could be done for the area -- vicious man. Shameless. Surrounded by hoards of police.

As to the content, the program did not sufficiently emphasize at all that it was the landlords who began many of the fires to get the insurance. It was said just once and quickly. Shame on them. But that was just a start. They also abandoned the buildings after decades of neglect -- the city did nothing to make them keep the buildings up to safety standards - now the program did say that a few times. It was know that the city did not send fire fighters quickly; I did not know (this was years after I lived there) that the fire companies were actually cut in the Bronx. I.E., they wanted these buildings destroyed, these people thrown out. Benigh neglect -- Moynihan should live on in infamy for that phrase.

This reminds me of the church upon which J.L. Carr based his gem of a novel, A Month in the Country. He came across a lovely church in desuertude and tried to save it. He discovered the authorities were letting it go to rot; themselves stealing functional elements in order to hasten the delay. He wrotes letters to the church; officials wrote lies in reply -- it's all in Byron  Roger's The Last Englishman. One night a demolition came and destroyed it after Carr had begun to put money in it to renovate -- with a few other people. So the novel about the saving of this church is a total wish-fulfillment. The analogy is the people who owned the building wanted it destroyed.

My grandmother stayed until the 1970s. She never was stolen from - an issue my father worried about. She had an enormous handbag, but she was tough old biddy and could look out for herself. Not yet frail at the time. by then the fires had begun. It was a decade but nearly 3 decades.  It takes time to burn 80% of a borough down and rebuilding began by the tenants before the third decade. 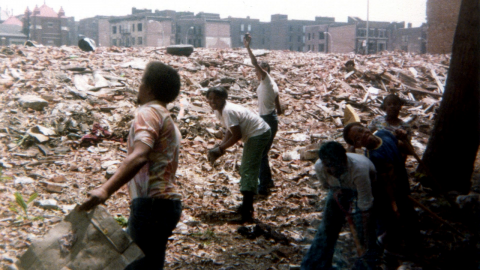 Yes starting in 1970s tenants got together and began to work to rehabilitate the buildings. .They had the problem they didn't own them, and so they began with abandoned buildings. At first they were stopped because the property was not theirs in law; they hired lawyers. There were attempts at wholesale evictions at the time. The tenants fought back, wouldn't go - they had nowhere to go, no money. Eventually organizers went after the city and small areas beyond the one Carter rehabilated were brought back. Then Koch came in and began a large program (100,000 units at a time) to rebuild areas, including roads.

Ethnically the information at the start was misleading. The speaker said in the 1950s the largest number of people living in the Southeast Bronx were Irish and Jewish; no the largest number were African-American and hispanic (often from Puerto Rico); there was a sizable minority of whites in the early 1950s, Irish, Italian, Jewish, a few Poles (my father was Polish and so too his family). If it was predominantly white, that had to have been in the 1940s. There was this implication that in the early 1950s (even in this film) that the poverty did not make for a bad community (sick, with petty crime and violence -- Americans are violent) after it was said it was predominantly Irish and Jewish. This makes me especially angry as there is no such thing as a "good slum," and ethnicity does not matter when it comes to misery, violence and other communal pathologies.

In the early 1980s my father together with his friends (men in their fifties to seventies at the time) sometime in the 1980s, all of whom by then lived in Suffolk or Queens country (maybe Brooklyn) and had various tools, cement mixers and things to build with, and bought what they didn't have, came to the handball courts of Crotona Park and over several months with the young hispanic and African-American men who played ball there or other games, rebuilt the handball courts and one playground nearby. Put in benches. There were two Italian men in the building industry, construction people by trade who helped.  It was a spontaneous gesture by a group of people who had the wherewithal (time and money) to do it in order to keep a place to meet and play games in that was habitable. 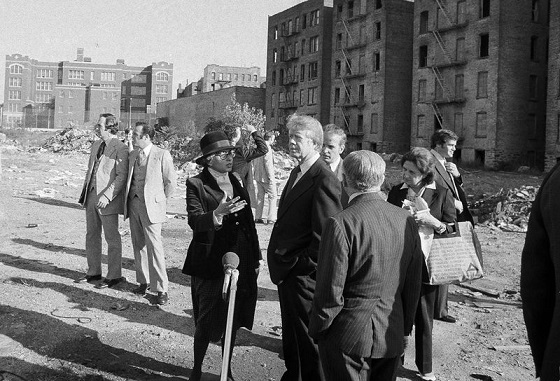 President Carter on Charlotte Street and its environs: three blocks were turned into small private houses with fences around them; they were offered for reasoable sums to families living in the area.

I did recognize a few of the blocks, the library, Sutphin Boulevard, the names of streets. My best friend was a Puerto Rican girl in my class, Magali her name. I've sometimes wondered what happened to her. I imagine she married young, aged young, and is now a grandmother. I do not assume she even finished high school.