The Tories have a large majority in England after the election

But that's not so in Scotland (definitely blue) nor Northern Ireland.  Because a majority votes for something in a system set up to favor the party that has won (not as badly gerrymandered as the US) does not make it a good decision. 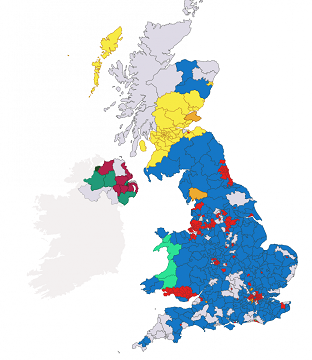 Last night I was at first shocked - yes. I lived in England for well over 2 years and in the north most people I knew were social or pro-social things, and decently minded about the world. Most of my FB friends and those I follow on twitter (not many) are "sickened," "shaken," "disgusted"  I find it distressing because this will be another green light to further destroy health care, social services, re-implant a vicious rhetoric. Labor had a magnificent agenda.
From an American perspective it seems a racist, anti-immigration vote so parallel to the attitudes which brought Trump to power, and since Trump has governed from the far right ever since with the very wealthy and powerful keep him in power.
I am a regular contributor to Doctors without Borders and the Xmas card they sent me has group of Arabian or middle eastern looking women around a fire, with a few children -- none what used to be called Caucasian, they are sort of smiling as they eat and talk. As I looked at it, I thought to myself what is it with people who call themselves white? why do they hate such people -- because they are poor? Trump had no trouble cutting off 200,000 from food stamps, let 'em starve ..

Here is a worthwhile article on what is called "colourism" in the UK from the Guardian:
https://www.theguardian.com/membership/2019/nov/02/colourism-shades-of-black-series-race-issue

And more general one showing the divisions in the voting and what is projected will now happen:

From Polly Toynbee of the Guardian you see the hate Corbyn labor people; they blame him for not running a strong "remain" election; maybe they are correct about that:

It was indeed all about Brexit. But Brexit was never about leaving the EU. For Leave, it was about ridding the U.K. body politic of a nasty infestation of authoritarian Liberalism vine weevils which had preyed on the U.K. at will, for all species of parties, for twenty years. Invidious, insidious and you couldn’t tell it was in your political party plant pot until it was way too late. By the time you saw the leaves wilting and the flowers dropping off, it was too late. They got everywhere — Labour (Blair, Campbell, Mandelson), the Conservatives (Osbourne, Grieve, most of the Cameron era intake) and the Liberal Democrats (Clegg). The BBC was full of them, as was academia. The civil service, too. It was time to clear house and Brexit was the way to flush them out.

For Remain, EU membership was simply about stymying the Conservatives. A lot of Leave’ers neither knew nor cared what the EU was, how it worked, what its ideological direction of travel is, what its policies are and how it operated behind the scenes in terms of its internal politicking and power plays. It really didn’t matter to huge swathes of Leave’ers — it impinged on right-wing governments, whatever the electorate had decided in that political cycle, and that was all that mattered.

There have been mass demonstrations against Brexit in England these past three years.  So eventually we'll see more scenes of mass demonstration and then imprisonment like we now see in France, Eygpt, Chile, Columbia, and (who knows) killing as in Bolivia (there was a woman MP beat to death by a crazed racist Brexiteer during the original referendum; then recently a young woman journalist in Northern Ireland); a hitherto Noble Prize winner for peace supported genocide in Burma), and yes the kind of non-violent forms we are seeing in Chile, Hong Kong. The list gets bigger.  The US is doing what it can to destroy Venezuela (take it over for oil) and Iran. I can believe US corporations are seeking to privatize where they can the British health service.