Sometimes what I have to report or to share is so harrowing, I have a hard time posting it. If Trump and republicans & capitalist democrats get their way, and the way this virus is now not being handled (no universal tests or tracing, no true expansion of health care system, no opening of ACA online until next January and then just one month), does not change, and at the same time force as many people back to work in social groups, as they can, a prediction in the Washington Post taken from what statistics we have now is 3000 deaths a day by June 1. That many. Far fewer would sicken and/or die, if the people who control the federal gov't would agree to organize and pay (out of taxpayers'money) for testing and tracing. 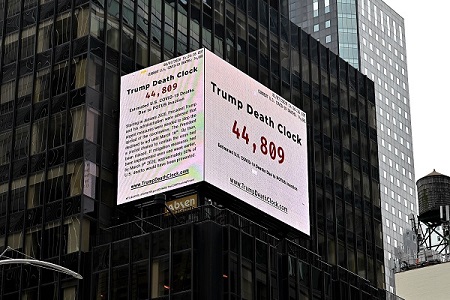 How many deaths this man is arguably responsible (by his continued delays & refusals to do anything constructive or useful for people).

So below the usual choices of article, videos you may have overlooked or not known about linked in -- first three linked in which can inform you about aspects of the pandemic and why we have a federal gov't which far from working to contain the virus and help people, is assaulting those institutions we have which can help and forcing people where it can back into dangerous working conditions

A video with Obama from 2014 explaining why he set up units to deal with a coming pandemic, experts all at the ready - all quickly disbanded and fired by Trump when he came in:  There is one of these godawful commercials first (and ironically selling just the sort of thing that is wrecking the environment) but then in 2014 here is Obama predicting this coming pandemic and putting in place the structures to deal with it. He could never get adequate funding:
https://www.cnn.com/videos/politics/2020/04/10/barack-obama-2014-pandemic-comments-sot-ctn-vpx.cnn 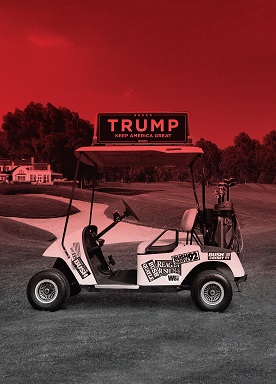 This from the New Yorker showing that the average well-to-do American in Greenwich, Connecticut is for Trump; Evan Osnos. It's not just the extremes of wealth and poverty (and no education), rigid evangelical hatred of the modern world, frantic racism, but the kind of voter who used to vote for Prescott Bush.

Shorter: Powerful people prefer mass death to adopting the social policies of civilized nations by Tim Marchand. Far fewer people would be impoverished for a long time to come were there decent social programs and helps from the gov't they pay for for them. In effect, the US gov't is barbaric -- this quite apart from its insane militaristic spending and ventures. 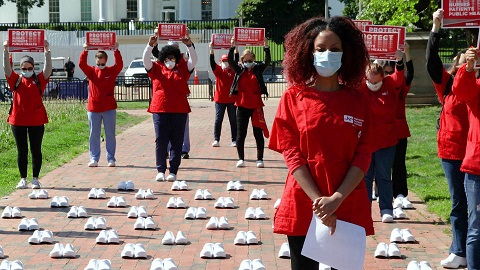 If you click below, you will get the whole article (with a short history of slavery and racist policies excluding black people
from any social programs for housing and education)

2) Chomsky gives the larger perspective, the longer view, the more thorough analysis: he says everyone must vote for Biden as a first small step to repairing the failed state. He would have preferred Sanders or any number of the original candidates for the democratic party, but those running this organization were not having any one but a deeply conservative democrat

Well, first of all, we should recognize that unless we get to the roots of this pandemic, it’s going to recur, probably in worse form, simply because of the manipulations of the capitalist system which are trying to create circumstances in which it will be worse, for their benefit. We can see that in the stimulus bill and many other things.

Now, second, because of the global warming which is going on and puts all of this into the shadow, we will recover from this at severe cost. We’re not going to recover from the ongoing melting of the polar ice sheets. And if you want to understand how contemporary capital is looking at this, take a look at Trump’s budget. It’s true that this is a pathological extreme of the normal capitalist systems and maybe it’s not fair to use it as an example, but that’s what we’re living with.

So on February 10th while the epidemic was raging, going to get worse, Trump came out with his budget proposals. What were they? First point, continue the defunding of health-related elements of the government. Throughout his term he’d been cutting back on funding of anything that doesn’t benefit private power and wealth, corporate power. So all the health-related parts of the government had been increasingly defunded. He killed programs, all sorts of things.

February 10th, let’s continue with it. So further defunding of the Centers for Disease Control and other health-related parts of the government. But there were also compensating increases in the budget, for the fossil fuel industry, more subsidies to the fossil fuel industry. So let’s not only to kill as many people as possible now, but let’s try to destroy all of society. That’s basically what the words mean. Of course, more funding for the military and for his famous wall ...

After the SARS epidemic in 2003, also a coronavirus, it was well understood by scientists that other recurrences of one or another coronavirus was going to come, probably more serious. Well, understanding is not enough. Someone has to pick up the ball and run with it. Now there are two possibilities. One is the drug companies, but they follow normal, capitalist logic. You do what makes profit tomorrow. You don’t worry about the fact that in a couple of years everything’s going to collapse. That’s not your problem. So the drug companies essentially did nothing. There were things that could be done. There was plenty of information circulating. Scientists knew what to do. There could have been preparations. Somebody’s got to pay for it. Not the drug companies. Well, in a rational world, even a capitalist world prior to Ronald Reagan, the government could have stepped in and done it.

That’s pretty much the way polio was eradicated, through a government-initiated and -funded program. When Jonas Salk discovered the vaccine, he insisted that there be no patents. He said, “It’s got to be public, just like the sun.” That’s still capitalism, but it’s regimented capitalism. That was ended at a stroke by Ronald Reagan. Government’s the problem, it’s not the solution. Let’s legalize tax havens. Let’s legalize stock buybacks costing tens of trillions of dollars to the public in pure robbery.

Government is the solution when the private sector’s in trouble, that’s understood. But if it’s just when the public needs something, government’s not the answer. So going back to 2003, government couldn’t step in. Actually, it did to a slight extent step in, and it’s very revealing to see what happened. Obama, after the Ebola crisis, recognized that there are problems. We have to do something.

Obama did several things. One of them was to try to contract for ventilators. Ventilators are the big bottleneck in the system right now. That’s what’s forcing nurses to decide who to kill tomorrow. There aren’t enough of them, but the Obama administration did contract for the development of high-quality, low-cost ventilators. The company was quickly bought up by a bigger one which sidelined the project—it was competing with their own expensive ventilators—and then turned to the government and said they want to get out of the contract, it’s not profitable enough ...

And some of the other things that went on are just too surreal to discuss. USAID had a program, very successful program, detecting viruses that are in animal populations, wild populations that are getting to closer contact with humans because of habitat destruction and global warming. So they were identifying thousands of potential disease viruses, working in China as well. Trump disbanded it. He’d been defunding it, but then he disbanded it with exquisite timing in October...

But then comes new forms of imposed slavery. So well into the late 1960s, federal housing laws required segregation. There was a lot of public-supported housing going on in the 50s. Levittowns and so on, but for whites, no Blacks. Liberal senators voted for this, hated it, but they voted for it because there was no other way to get any public housing passed ...

[Senate Majority Leader] Mitch McConnell is the evil genius behind this. He’s been doing it beautifully. Make sure that the judiciary is stuffed with young, mostly unqualified, ultra-reactionary justices. That ensures that whatever the country wants in the future, they’ll be able to kill it. Just like the Roberts Court, the majority is able to do it now. Republicans know that they’re a minority party. There’s no way to get votes on their actual programs. That’s why they have to appeal to so-called cultural issues—gun rights, abortion and so on—not their actual policies, which are fill the pockets of the rich. That’s the actual policy. Trump is a genius at this. Have to admire him. With one hand he says, “I’m your savior, I’m working for the poor working guy.” On the other hand he’s stabbing him in the back. It’s pretty impressive. He’s most certainly the most successful con man in American history, ever.

I presume it’ll explode sometime, but so far it’s maintaining itself. They’re trying very hard to dismantle whatever elements of democracy there are ... Read the rest at Labor Notes. 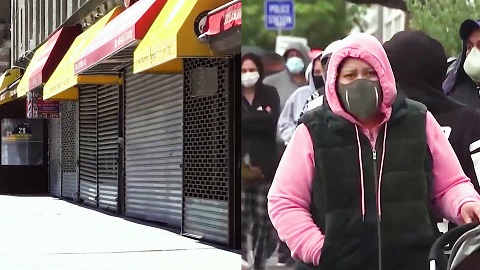 Unemployment at 33 million (estimation) as of yesterday

3) A European, an Irishman specifically looks on: Fintan O'Toole from the Irish Times, 4/25/20. All. Of. This. Donald Trump has destroyed the country he promised to make great again. The world has loved, hated and envied the US. Now, for the first time, we pity it

Judy Woodruff has decided to commemorate who has died -- tell their lives, about their families, the worlds they have lost and which have lost them -- every few nights on PBS Reports; Remembering Americans lost to the coronavirus 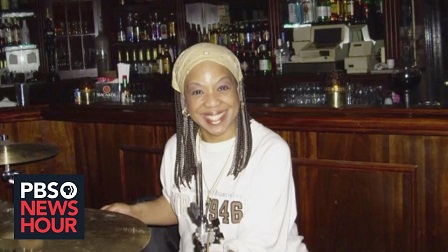 Gone: Lysa Dawn Robinson - the deep pity of it

.Over more than two centuries, the United States has stirred a very wide range of feelings in the rest of the world: love and hatred, fear and hope, envy and contempt, awe and anger. But there is one emotion that has never been directed towards the US until now: pity. 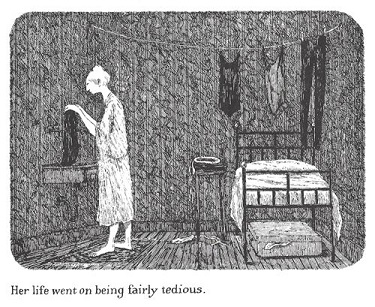 -- One of Trump's cronies took over the Post Office; apparently the president can do this; it will be gradually destroyed, turned into some kind of private enterprise. I worry now about my checks getting to the people I pay; will I be forced to pay online by credit cards?  1916 wasn't it the Post Office was fought over. It's a central institution like the DMV (driving). Democrats did nothing, did not make an outcry as far as I can see; the only way Trump can be defeated is if mailing in ballots is allowed. It's said that Biden's videos from his basement are not very good -- the DNC which put him in place is said to be worried. Right. The Wash Post reported on how Trump squashed the CDC's plan for testing and tracing which would have saved lives; he stopped Fauci from testifying. They actually had a plan on how to do it and how to open the economy while preventing as much sickness and death as possible. Trump overturned Flynn's conviction, or just ignored it. Also tightening grip to stop any general statistics from federal agencies. The Justice Department is fighting in the Supreme Court to destroy what's left of Affordable Care, millions are now w/o health care, to make the whole thing unconstitutional on the grounds that the individual mandate was abolished (irrationally, this small attack is now being used for a frontal one). Many people are dying at home -- of other things beyond Covid10 -- rather than incur lifelong debt. People now fear the hospitals are unsafe because the workers haven't anywhere near sufficient personal protection gear. And Betsy DeVos has reversed the Education department's policy on rape and sexual assault, by making a law or rule that the accuser must come forth, put herself in public and there must be a hearing, a trial; this will be enough to stop the few women who have protested.

So that's just the past week and one half --