Nothing I have read, watched or heard said comes as close to centrally what has been happening these past days since the remorseless public murder of George Floyd as this conversation on DemocracyNow.org with Amy Goodman and Nermeen Shaikh:

How racism and racial terror have fueled this nation-wide anger:

I think it’s important to say that these are not just repeats of past events. These are the consequences of the failures of this government and the political establishment, the economic establishment of this country to resolve those crises, and so they build and accumulate over time. And we are watching the boiling over of that.

Imagine how angry, desperate, rage-filled you would have to be to come out and protest in the conditions of a historical pandemic that has already killed over 103,000 Americans, that has had a disproportionately horrendous impact in Black communities. I believe 23,000 or 24,000 Black people have died. To put it more bluntly, one in every 2,000 African Americans in the United States has died as the result of COVID. So imagine how difficult things have to be for people to come out in those conditions. So, I think that the buildup around police brutality, the continuation of police brutality, police abuse and violence and murder has compelled people to have to endure those conditions, because it is obvious that there is either nothing that our government can do about this or that the government is complicit and chooses not to do anything about this ...

That this nation-wide anger to be understood must be seen in the context of global greed maintained by military terrorism:

But we want to make the connection between the local and the global, because, you see, when you sow the seeds of greed — domestically, inequality; globally, imperial tentacles, 800 military units abroad, violence and AFRICOM in Africa, supporting various regimes, dictatorial ones in Asia and so forth — there is a connection between the seeds that you sow of violence externally and internally. Same is true in terms of the seed of hatred, of white supremacy, hating Black people, anti-Blackness hatred having its own dynamic within the context of a predatory capitalist civilization obsessed with money, money, money, domination of workers, marginalization of those who don’t fit — gay brothers, lesbian sisters, trans and so forth ...

The catalyst was certainly Brother George Floyd’s public lynching, but the failures of the predatory capitalist economy to provide the satisfaction of the basic needs of food and healthcare and quality education, jobs with a decent wage, at the same time the collapse of your political class, the collapse of your professional class. Their legitimacy has been radically called into question, and that’s multiracial. It’s the neofascist dimension in Trump. It’s the neoliberal dimension in Biden and Obama and the Clintons and so forth. And it includes much of the media. It includes many of the professors in universities. The young people are saying, “You all have been hypocritical. You haven’t been concerned about our suffering, our misery. And we no longer believe in your legitimacy.” And it spills over into violent explosion ...


On the decades of systemic immiseration and barbaric putdowns of African-American:

I’m from Denmark, South Carolina, where we have three stoplights and a blinking light. And I grew up in a food desert, meaning that you couldn’t go two to three miles and get fresh fruits and vegetables, meaning that you probably have a higher propensity to have things like diabetes. We’re drinking dirty water where I’m from, which means that you are taking in toxins that are likely to cause cancer at higher rates; inhaling dirty air because of Brownfields and the manufacturing plants, meaning that you’re more likely to have asthma. Because we didn’t expand Medicaid, my hospital shut down. We live along what’s called the “corridor of shame,” in which kids go to school, and their heating and air don’t work, and their infrastructure is falling apart. These are the systemic injustices and systemic racism that we’re highlighting and talking about ...

February 8th, 1968, is by far the most important day of my life. Not only did law enforcement shoot into a crowd, killing Henry Smith and Samuel Hammond and Delano Middleton. Not only did they shoot my father. Not only was he the only person who was incarcerated.


Who are we funding? we should tonight be arresting the police all over the country who have been brutally attacking protesters:

I mean, look at the kind of wanton, reckless abuse and violence that the police are instigating, and attacking people who are trying to protest. I feel like what we’ve seen over the weekend is a national police riot. And, you know, it’s no wonder. They feel emboldened by the white nationalism of the president of the United States and, really, the lawlessness of the Republican Party writ large. And so, it feels like we’re bearing the consequences of that.

But I think that there is a bigger issue about the cops that is also worth talking about, which is, why these police are never arrested, prosecuted, punished, really, even beyond just arresting and prosecuting people, but just punishing them as public servants for their kind of racist, abusive and violent behavior. And I think that, you know, regardless of what these elected officials have to say, I think that we’re actually going to see a lot more of this, which is why the conflicts will continue.

And the reason why I say that is because it has been a strategy of cities across this country that have committed themselves to not investing in the civic and public sector infrastructure — so, public schools, public hospitals, public libraries — all of the things that make a city function. Those have been systematically defunded, increasingly privatized. And the way that cities manage the inevitable crises that arise from that, when combined with unemployment, when combined with poverty, when combined with evictions and all of the insecurities that we see wracking cities across this country, the police are used to manage that crisis. And that is why, in city after city, as other public institutions take financial hits, as other public institutions are defunded, it’s the police that always get to maintain their budgets. And we look around now, where, because of the COVID crisis, every city is talking about massive budget cuts, but not to the police. The police almost never have to incur layoffs. They never have to incur budget cuts, because they are seen as the public policy of last resort. 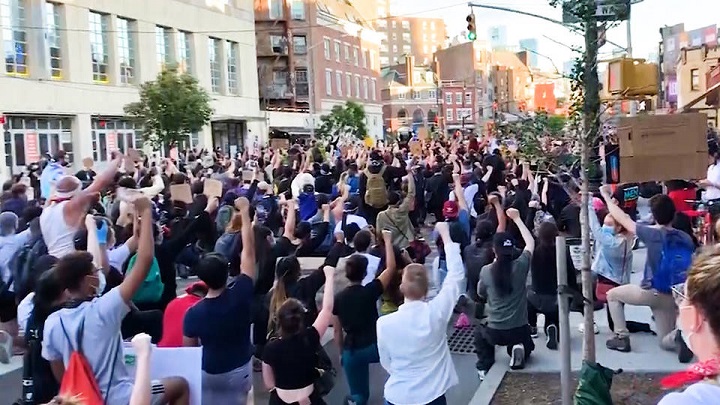 This is one of many peaceful crowds marching, demonstrating before the police surrounded them, determined to diminish and end what the swelling crowd was doing ....