Here is an unusual blog:  I write it to urge readers to read another text daily:  Heather Cox Richardson's daily newsletter, Letters from an American; and to watch her twice-a-week videos. You will in brief compass learn as much as you might perusing the best US newspapers daily on what is happening over the election of Joe Biden, Jr for president. He is now President Elect Biden, with Kamala Harris the vice-president.

Heather Cox Richardson seems to me the best daily commentator on what's happening across the country and in politics. She's enormously learned in precisely the areas needed  to understand why and how Trump is getting away with what seem to me to be treasonous and criminal acts  -- thwarting the  electoral process right in front of us, demanding governors throw
out votes,  the man who won the election be thrown out. According to her (and in her latest  book this is part of the terrain):  during the reconstruction era all the cracks in our constitution which can be used to undermine democracy, and the deliberate elements put into the constitution in the first place to make it an oligarchy of white males who can own people (enslave them) to work them to death for profit.  Her book, How the South Won the Civil War explains how in the reconstruction era when the Republican party switched allegiances to the very rich and businessmen, and became fundamentally structurally racist as by the later 19th century (the "gilded age") did the democrats down south); the behavior Trump is exhibiting has happened before. Today's fervent open (not hiding away like the discreet wealthy) are the direct descenants, and first were seen as a group in Barry Goldwater's campaign and defeat. 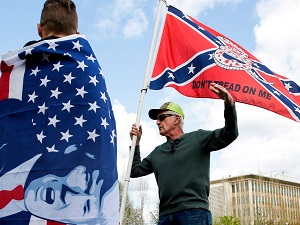 The John Birch Society of the 1950s, vitriolically against Eisenhower's moderate Republicanism, belongs here too.

Here is her Facebook page  where you can read her biography and find out where to sign up for the daily newspaper and find the bi-weekly video chats:

Here is my Sylvia II blog where I am autobiographical but one day after I found her presence, work and began to read her book, I recommended her strongly

She is strengthening and consoling by her very presence and what she has to tell and to advise.

*********************************
For today I record:  Trump did not buy the 100 million doses offered by Pfizer las spring, and now we have the left-overs. He walked out of WHO. Now we learn they have no plan: Azar may fool with empty rhetoric but what he says is they will send what they havd to governors: I wonder if that includes democratic governors. I also want to point out that the people within Trump's circle get extraordinary treatment for COVID that saves them and is not available to anyone elso so a horrible crook like Guiliani is saved and thousands of others die.

The UK is beginning to vaccinate millions this week, and the US has to look forward to a whole winter of sickness and dying because this group of people did not purchase enough vaccine when they could have. Why? The contrast could not be more stark.
Each day Biden is not yet in office, he and they do all they can to sabotage Biden's presidency (before it begins) and cause more misery for most people -- not to omit trying to undermine the election. It's "Safe Harbor" day and still absurd lawsuits are filed, hard pressure on legislatures to overturn the electoral college results.
But it's the totally unnecessary sickness and deaths that are so stark. Especially compared to other countries where they can look forward to a better & immediately hopeful Christmas season. Just think if Trump had really won, we'd be losing our social security, ACA would be gone, prisons expanding ever more.